Hear the sounds of a thousand cowboy boots

The Pozo Stampede is back with a line-up tighter than a pair of Wranglers on a bull rider’s skinny cowpoke butt.

Bentley came out of the gate bucking like a champ. Both his 2003 Capital Records self-titled debut and its 2005 follow up Modern Day Drifter went platinum. Now on his sixth album, Home, he’s enjoyed 18 charting singles over the course of his career, nine of which hit No. 1. Oft compared to Waylon Jennings and Merle Haggard, he’s the new vanguard of authentic country.

The Eli Young Band just recently won Song of the Year with their first No. 1 single “Crazy Girl.” This alt-country act mixes cocky enthusiasm and reverence for tradition—all the while delivering heartland-based country rock.

Nashville-based Will Hoge is heavily influenced by his musician father and uncles. Delivering songs in the singer-songwriter mode, he draws on personal experiences, such as his album The Wreckage, which was completed after he recovered from a scooter accident that left him in critical condition.

Brett Eldredge is signed to Atlantic Records, and The Ragged Jubilee just released its second full length, the awesome In the Valley.

The Pozo Stampede happens on Saturday, April 14. Doors open at noon. Visit pozosaloon.com for ticket reservations, or buy tickets ($38 to $80) at Boo Boo Records, the Clark Center, and Faultline Music.

Barn Dance is the perfect title for Little Black Train’s new CD, a hootin’, hollerin’, foot stompin’ collection of old timey bluegrass, blues, and Celtic Americana that could have been recorded 100 years ago by a musicologist dragging a wax cylinder recorder into the Appalachian hills.

Of course, on LBT’s recording, the sound’s a heckuva lot better, though all tracks were recorded live into a pair of stereo microphones with no overdubs or studio trickery. It sounds clear and clean, but also antique.

The album’s official release is April 17, but on Saturday, April 14, they’ll offer two performances to promote Barn Dance. You can hear them live on KCBX 90.1 FM at 3 p.m. during Sonnie Brown’s Song Town, and at 5 p.m. they play the Red Barn at South Bay Community Park in Los Osos in a concert hosted by the Red Barn Community Music Series in cooperation with KCBX Public Radio and the Live Oak Music Festival (all ages; $10 at the door).

“We like to give equal weight to traditional melody playing and the old songs, as well as fiery improvisation on mandolin and fiddle,” Mason said. “Before the boom of commercial radio in the ’20s and ’30s, you would have heard more melodic evidence of the old country in the sound of the fiddle; that’s where John’s style comes into play. He invokes the timeless spirit of Donegal and Clare in the tunes he brings to us. Kenny has a long history of jazz, swing, blues, and bluegrass on the mandolin, and you can hear that plain as day when we let him go to town.

“As for my songs,” Mason continued, “I was born in West Virginia. My father’s family lived there since long before it split off from Virginia. My grandpa worked the C&O Railroad, and his father was a circuit-riding preacher, so I’ve got fire and brimstone and coal dust under my skin. I just love how the same words crop up again and again in the traditional songs. Some of the verses can be traced right back to Britain and Ireland. Gospel was always a big part of music up in the hills; seems like you’re closer to God up there anyway, but the coal boom was what brought in the sound of the Piedmont and the Delta. Black folk flooded in to work the mines, and that’s when Anglo-based mountain music met the southern blues. Singers like Dick Justice and Dock Boggs and Charlie Poole recorded music that had all those ingredients mixed up together. Those are the rails we travel with Little Black Train.”

The all-female group used to be a novelty thing, singing nonsense songs in silly voices, but by the time the Bosewell Sisters arrived in 1930 and then the Andrew Sisters arrived in 1937, people were forced to take notice. It’s frequently an uphill slog for serious female acts, mainly because unserious ones have continued to pop up over the years (Thanks for nothing, The Teen Queens and your one hit “Eddie My Love;” I’m talking to you, too, Spice Girls! You get a pass, The Runaways, because you were so raw and crazy).

Cut to the Indigo Girls, who proved that contemporary girl groups are forces to be reckoned with, purveyors of emotionally resonating songs and stellar musicianship. Carrying on that tradition is Blame Sally, a female quartet well known to local music lovers. Two of their members—Pam Delgado and Jeri Jones—cut their teeth in the local music scene, playing with the likes of Jill Knight. They eventually moved to the Bay Area and joined forces with two other gifted singer-songwriters—Monica Pasqual and Renee Harcourt—and they’ve been on an upward trajectory ever since.

Their newest album, 2011’s Speeding Ticket and a Valentine, is so freaking good, so beautiful sounding with harmony vocals, so melodic, poignant, and infectiously listenable. I guess seductive is the best way to describe this gang of four highly talented ladies.

Late ’70s punk rock progenitors The Buzzcocks are among the royal three, which also includes the Sex Pistols and the Clash—pretty good company! The British band formed in 1976 and instantly became a huge sensation, but while the Pistols embraced anarchy and the Clash embraced politics, the Buzzcocks delivered a string of hit singles featuring hard-charging guitar and thumping bass and drum rhythms in heartrending personal songs about love won and lost or disgust at contemporary society.

Another Music in a Different Kitchen, Love Bites, and A Different Kind of Tension were the band’s seminal albums, but while in the process of recording their fourth, the band fell apart in 1981. Finally they reformed around the early ’90s with original songwriters Pete Shelley and Steve Diggle and a new rhythm section (Tony Barber on bass and Phil Barker on drums), and they released the critically acclaimed Trade Test Transmissions, proving there was still life in these old punks. And then subsequent generation of punk acts rediscovered the Buzzcocks and started covering their songs.

“Looking back on it now, what’s going on is like echoes of the Big Bang,” Diggle said in press materials. “You look around you in society and the culture; so many things would not have been the same if there never was punk rock. It’s strange; it’s like a science fiction novel. But to us at the time, it just sprung naturally.”

Mark Aaron James is the headliner for Steve Key’s Songwriters at Play showcase at The Porch on Thursday, April 12 (6:30 p.m.; all ages; pass the hat). Born in California and raised in Cocoa Beach, Fla., he headed to Nashville and co-wrote with many Music City hit makers, and his compositions were performed by everyone from Jimmy Buffett to the World Peace Choir.

L.A.’s Sweet Talk Radio returns to play Sculpterra on Sunday, April 15 (1 p.m.; all ages; pass the hat). Their songs have been featured in numerous television series like In Plain Sight, Army Wives, Beautiful People, and Joan of Arcadia.

Finally, Jay Horn plays the Tuesday, April 17, showcase at Kreuzberg (6:30 p.m.; all ages; pass the hat). He’ll inspire you with his “musical ministry” delivered through original compositions in the vein of Kenny Loggins, James Taylor, and John Denver.

Ian Franklin & Infinite Frequency play the Frog and Peach Pub on Thursday, April 12, at 7:30 p.m., in support of the release of their debut full-length album, Breaking Grounds. The Bay Area dynamic singer-songwriter mixes roots rock, funk, jazz, blues, and folk into a signature sound. When he’s not playing shows, he works as a music therapist. 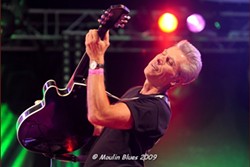 I really wanted to get the Cadillac Angels to play my upcoming wedding, but they were booked that day, so I’ll have to get my fix on Friday, April 13, when they play Mongo’s at 9 p.m. Front man Tony Balbinot recently told me about his latest escapade: “We caught a guy recording one of our shows in Clarkdale, AZ. with one of those high tech digital CIA/FBI-looking things. My drummer spotted it. I thought it was an ashtray. I gave him the lecture on recording without permission and all that FCC stuff and he gave up the tape, er … uh, I mean chip. Anyway, I bought him a beer and gave him a T-shirt so we kept a fan. Now we have a new CD called Cadillac Angels Live at the 1012 Lounge, the Official Bootleg. It didn’t cost us much so they’re only $5. We use the money to offset Chevron’s recent refusal to sponsor us.”

On Saturday, April 14, Art Emr brings his Sinatra-like vocals and his cabaret performance style to D’Anbino Tasting Room for a 7:30 to 10 p.m. show. Emr, a raconteur who once received a singing lesson from Old Blues Eyes himself, weaves great stories throughout his performance of jazz favorites from the Great American Songbook ($10 admission; $5 for Record Club members). Emr is calling his show “Sideways Gettin’ Sideways: Music For Lovers & Losers,” and it also features legendary guitarist Doug MacDonald as well as venue owners John D’Andrea and Carmine Rubino, who’ve worked with everyone from John Lennon to the Beach Boys, BeeGees, Rolling Stones, and more. This great show honors “Military Families and Friends.” 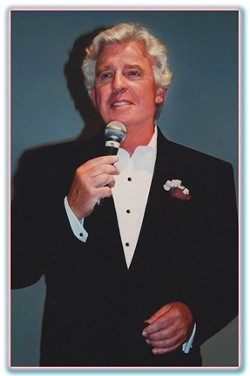 Bill and Kate Isles play the next Música Del Río House Concerts in Atascadero on Saturday, April 14, at 7:30 p.m. (Call 466-6941 for $15 ticket info). Hailing from Duluth, Minn., this husband-and-wife folk duo writes songs that are poetic reflections of life experiences.

Legendary R&B singer Bettye LaVette appears at 8 p.m. on Saturday, April 14, at the Spanos Theatre, where she’ll share some of her favorite renditions of songs that have become standard LaVette hits, as well as music from her latest release, INTERPRETATIONS: The British Rock Songbook. Student and adult tickets are $30 and $38 (call 756-2787).

On Sunday, April 15, the Famous Jazz Artist Series brings alto saxophonist Chris Fagan, a leading player in the Seattle jazz scene, to D’Anbino Wine Tasting Room. Fagan records for the Northwest record label Pony Boy and will roll through the area on a brief Southern California tour. Bassist Luther Hughes, drummer Dick Weller, and series co-producers Charlie and Sandi Shoemake (piano/vibraphone and vocals) will join in during two performances, a 4 p.m. matinee and a 7 p.m. evening show, each for $15, or stay for both for $20. Call 927-0567.

The North SLO County Concert Association rounds up its concert season with Café Musique on Sunday, April 15, at 3 p.m. in Paso’s Trinity Lutheran Church. Their sound blends classical, swing, gypsy, folk, tango, and more into a mélange of music that’s drop dead gorgeous, upbeat fun, and poignantly heartrending—they do it all! For
more info, call 239-2770 after 3 p.m.
or 237-8122.

Awesome Austin-based singer-songwriter Michael Fracasso is passing through again, and his local friends, Bob & Wendy, have three shows lined up with him. The two scheduled house concerts are sold out, so they added a third show at Steynberg Gallery on Thursday, April 19 (7 p.m.; all ages, $10 at the door). I highly recommend you call and reserve your tickets right now! Call 547-0278.