Being a creature of severely limited attention span, I just don’t know how to feel about the third annual Paso Robles Digital Film Festival (known as PRDFF, PDFF, or Wild West Virtual Film Fest, depending on who you ask and what mood they’re in).

On one hand, the festival sounds like a super event, tucked into the romantic, dusty Paso hills. Eager young filmmakers cozy up to Hollywood royalty. Clint Eastwood has shown a film at the festival, Kevin Bacon sang last year, and Willie Nelson and daughter Paula are regulars. Cass Warner will be present this time around to share her family legacy through her documentary The Brothers Warner. Wine and conversation flow at venues such as Le Vigne winery, Franklin Hot Springs, and Level Four. Panels of experts provide valuable insight on subjects like the future of film in the information age. Oh, and it’s a very green festival, too, with solar-powered generators and re-usable, compost-able, post-consumer everything.

Everything seems fabulous, until you try to go online for tickets, where the cluttered site’s graphics, grammar gaffes, glut of flashing links, and general information overload make you forget why you came. Stifling a mild panic attack, this writer phoned up the festival’s friendly director, Benford Standley, asking for navigational assistance: Dates? Locations? Screening times? It’s all in there somewhere, though some is terribly out of date, under construction, or hard to locate between quotes inexplicably defending the Internet.

For a digital film fest, one proud to expose new filmmaking talent to a global audience through live streaming—one stuffing its promotional materials as often as possible with the buzzwords “new media,” “the wave of the future” and “the digital age”—the web presence is frightening.

But that doesn’t mean the physical event can’t be a rollicking good time. Quite the contrary: This year’s film and music lineup sounds promising. Clint’s kid Kyle Eastwood will provide musical accompaniment, alongside Willie’s daughter Paula Nelson and her band the Guilty Pleasures, with local darling Jade Jackson sweetening the deal.

Nelson is looking forward to seeing Eastwood play for the first time, she told New Times in a phone interview. The Austin, Texas-based singer will also screen her music video, a cover of John Fogerty’s “Have You Ever Seen the Rain?” a duet with her famous father. “It was a great bonding experience for me and my dad,” she said of the video, produced by Willie Nelson’s new film company, Luck Films.

Director Mick Jackson will screen his Grammy award-winning HBO movie, Temple Grandin, followed by a question-and-answer session. The film stars an autistic woman of the same name (played by Claire Danes) who revolutionized the cattle industry in the ’70s, making it safer, more efficient, and more humane. Jackson will receive the festival’s Humanitarian Award.

The Grandin screening will be paired with a selection of documentaries about the plight and suffering of children. 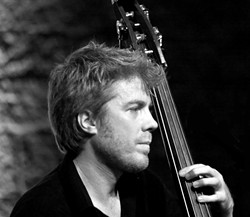 Directed and produced by Ryan Page, Blood into Wine stars the enigmatic Maynard James Keenan, frontman for the bands Tool, A Perfect Circle, and Puscifer, who unexpectedly peaced out of Los Angeles to live in an Arizona town, home to around 300 people. Keenan then set about turning the place into a world-class wine region, despite harsh terrain and even harsher industry prejudice.

Wine snobbery takes another smack in the face with a screening of Bottle Shock, directed by Randall Miller, about the year Napa Valley wines defeated French vintages in a blind tasting competition in Paris, forcing connoisseurs to reconsider California as a legitimate force in the wine industry. 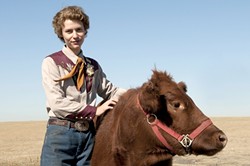 In light of its Paso Robles setting, wine has become a prevalent theme at the festival, said director Standley. After the Bottle Shock screening at Le Vigne Winery, there will be a blind tasting competition between Paso Robles and Napa Valley, a reenactment of the 1976 “Judgment of Paris.”

It’s clear the man behind the three-year-old fest knows a thing or two about getting folks together to enjoy relevant and inspiring cinema, uncorking some fine wines and kick-ass country music to set the mood.

Despite her moviemaking legacy—her grandfather Harry founded Warner Bros. Studios—Cass is not an heiress, something her documentary explains. The young Warner says she went through all of the same struggles every new filmmaker encounters, working creatively within budget constraints and toting the flick to festivals around the country, where the film picked up a few awards and the respect of critics.

But when it comes to harnessing that massive series of tubes called The Internet, the Paso Robles fest lags behind, despite lofty claims like, “thepdff.com goes beyond the cutting edge … we want to be the digital sword, and cut filmmakers
and filmgoers a trail to the future and after, with our connections to information and technology.”

My advice to the PDFF? Stop pushing the digital thing, pick one name, get a web designer, and start capitalizing on what you already have going for you: sassy country tunes, cinema with a Western flair, local wine and wit, and the spark of conversation between aspiring filmmakers and their heroes. ∆