The Morro Bay Harbor Festival, this Friday, Oct. 4 through Sunday, Oct. 6, has really outdone itself this year on the entertainment! As usual, there's all-day music and fun on Saturday and Sunday, but the weekend event begins with a Friday night Sunset Rhythm Kickoff Concert featuring Peter Case and Cracker (doors at 5:30 p.m.; 16-and-older; $30 at my805tix.com), at 895 Napa Ave., suite A3. Alcohol will be available for those 21 and older; and food's available from The Greasy Weiner, Giovanni's Fish Market, and Templeton Greek Food.

Case, a New Yorker, traveled west and got his start in 1976 with The Nerves in San Francisco, where their song "Hanging on the Telephone" was covered by Blondie. The Nerves went on to tour the U.S. and open for the Ramones and Mink DeVille and play co-bills with The Nuns and Devo. After they broke up in 1978, Case formed The Plimsouls in 1979—best known for their 1982 megahit "A Million Miles Away," which was included in Valley Girl (1983), starring Nicholas Cage and Deborah Foreman. His musical bona fides now well established, Case went on to a long solo career that's generated some awesome radio hits such as "Old Blue Car," "Put Down The Gun," "Let Me Fall," and others. He's also known as a mesmerizing raconteur who weaves amazing stories in between his rock, blues, and folk tunes. He starts at 6:30 p.m.

Cracker, which grew from the ranks of Camper Van Beethoven, formed in 1991 with lead singer David Lowery and guitarist Johnny Hickman. Their biggest success came early on with the release of the gold-selling Kerosene Hat, which included the singles "Low" and "Euro-Trash Girl." Their first single, "Teen Angst (What the World Needs Now)" remains one of my favorite modern rock songs! They have an infectious rock/punk/grunge/psychedelic/country/blues/folk sound. They take the stage at 8 p.m. 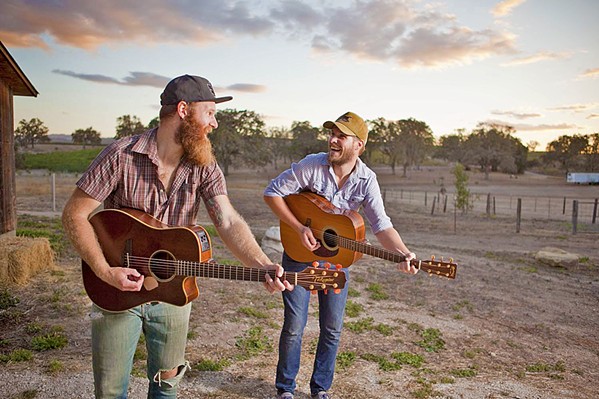 Lots of fun, lots of food, and lots of stuff for the whole family! Park at Morro Rock and take the trolley to the Embarcadero!

If you're not up for the Harbor Fest, Atascadero's got its own thing going on this Friday night with Tent City After Dark featuring Moonshiner Collective, Arthur Watership, and Bear Market Riot on Friday, Oct. 4 (doors at 5 p.m.; $20 presale at my805tix.com; $25 at the door). Food and drink will be available for purchase. The event is a fundraiser for the city's Atascadero Colony celebration, on Saturday, Oct. 5, in which the 1916 tent city that started A-Town is re-created, complete with actors in period costumes in Sunken Gardens!

Friday's show will be emceed by the trio Bremen Town, who'll kick off the music before introducing Bear Market Riot, who'll perform their percussive, raucous songs, with harmony vocals. They're three-time Best Band winners in the New Times Best Of Readers' Poll!

Up next it's Arthur Watership and their ethereal, contemplative, but always arresting and unique melodious songs. They're New Times Music Award winners!

"Tent City After Dark is a one-of-a-kind experience here on the Central Coast," Atascadero Colony Days board member Candice Hubbard said in press materials. "You get to spend the evening enjoying music among the historical tents and under the bright stars. I can't wait to see the amazing bands this year."

The Fremont Theater hosts former The Monkees member Michael Nesmith and the First National Band on Saturday, Oct. 5 (doors at 7 p.m.; all ages; $42.56 to $66.02 at Boo Boo Records or fremontslo.com). 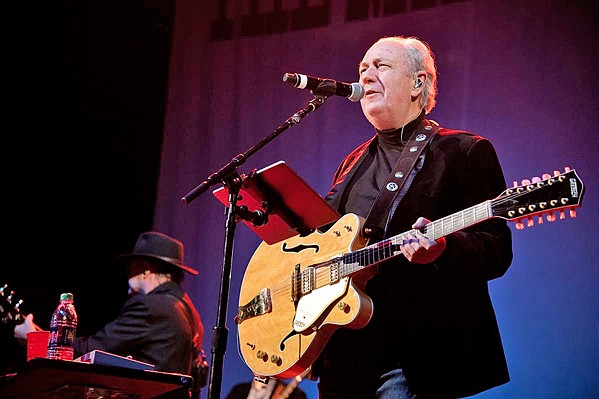 Unlike his compatriots—Micky Dolenz, Peter Tork, and Davy Jones—Nesmith came into what was essentially the first "boy band" already a skilled musician and songwriter, and from the start, he composed and produced some of the recordings for the TV series (1966-68).

The Monkees disbanded in 1971, and by then, the other members had developed some musical skills, but Nesmith has remained the most talented of the group, composing "Different Drum," a hit for Linda Ronstadt with the Stone Poneys, as well as the top-40 hit "Joanne," with his own group the First National Band.

Indie rockers Crumb play a Numbskull and Good Medicine Presents show at the Madonna Expo Center this Sunday, Oct. 6 (doors at 6 p.m.; all ages; $18 presale at eventbrite.com or $20 at the door). Check out their inventive and super weird video for "Locket" online! You'll feel like you're on LSD! 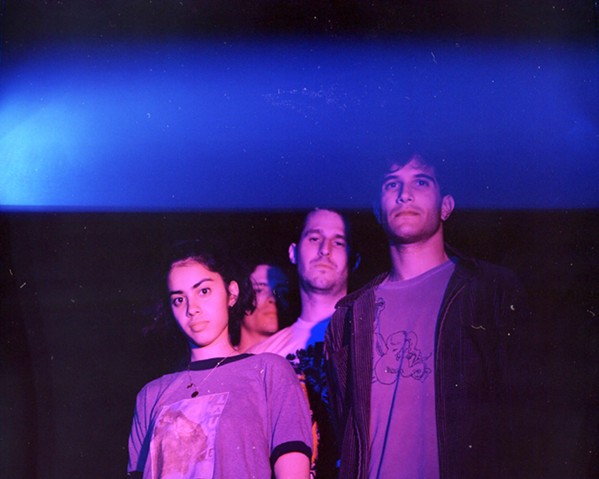 You can still get tickets for the Numbskull and Good Medicine show featuring Dead Kennedys at the Madonna Inn Expo Center this Thursday, Oct. 3 (5:30 p.m.; all ages; $26 presale at Boo Boo's and eventbrite.com or $30 at the door), with The Living End, Good Riddance, and 88 Fingers Louie opening. 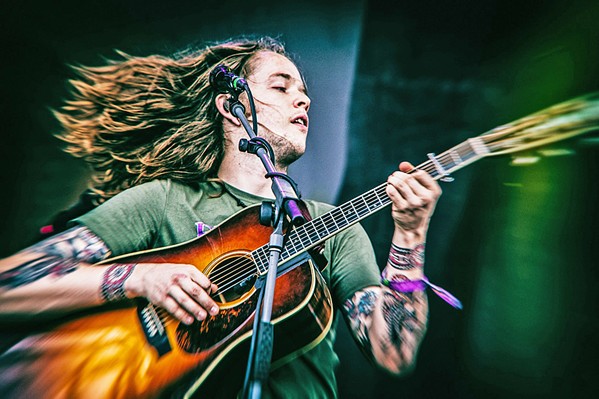 Singer-songwriter and guitar wizard Billy Strings plays BarrelHouse Brewing on Thursday, Oct. 3 (6 p.m.; all ages; $20 presale at Boo Boo's and eventbrite.com), touring in support of his new album, Home. The International Bluegrass Music Association just named Strings New Artist of the Year. You've never seen high velocity flatpicking like this before! A lot of his dates have been selling out, but last I checked, tickets were still available.

Dead Man's Party, a tribute to Oingo Boingo, plays The Siren on Friday, Oct. 4 (doors at 7:30 p.m.; 21-and-older; $20 presale at Boo Boo's and eventbrite.com or $25 at the door). This octet re-creates the manic energy, theatrics, and crazy rhythms of Danny Elfman's group.

If you like great music and great wine—I know, who doesn't, right?—the place to be this Saturday, Oct. 5, is the SLO Brew Rock Event Center, where Rockin' R Winery will celebrate its 10th anniversary (7 p.m.; 18-and-older; $10 presale at slobrew.com or $15 at the door).

Started by singer-songwriter and entrepreneur Dean DiSandro, who started making wine in his garage in 2001 while still running an Orange County software development company, he bought eastside Paso Robles property in 2006, officially opening his tiny tasting room in 2009.

Rockin' R doesn't distribute their wines, which are sold exclusively through the R-Fan Club and at their tasting room Union Road Wine Trail just east of downtown Robles. They're "100 percent varietals and proprietary blends without adherence to snobby rules of convention, thus their motto, 'F-the Rulz, R-Wines Rock!'" according to DiSandro, whose wines are named music-centric titles such as Bohemian Rhapsody, Ax'L Rosé, Nirvana, King Crimson, and Jailhouse Rock. 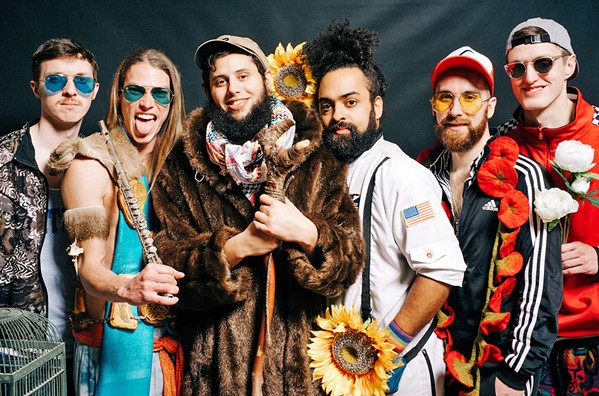 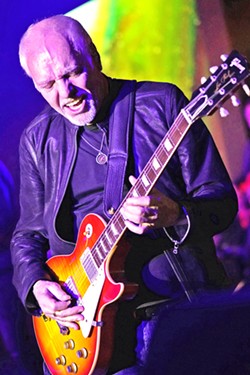 Innovative "talking guitar" master Peter Frampton plays the Vina Robles Amphitheatre on Thursday, Oct. 3 (7 p.m.; all ages; $66 to $136 at vinaroblesamphitheatre.com). Frampton's string of hits is impressive! "Nowhere's Too Far for My Baby," "Show Me the Way," "(I'll Give You) Money," "It's a Plain Shame," "Dig What I Say," "Apple of Your Eye," "White Sugar," "Baby I Love Your Way," "While My Guitar Gently Weeps"—the man could do no wrong in the '70s and '80s! The tour will feature special guest Jason Bonham's Led Zeppelin Evening, as well as Julian Frampton. Δ