Editor’s note: This interview took place before the Great American Beer Festival in Colorado, and the event proved victorious for a handful of talented local brewers. Central Coast Brewing won a gold for its German-style schwarzbier, General Schwarz, and silver for its American-style pale ale, Monterey Street. SLO Brew won bronze for its oatmeal stout, Feelin’ Your Oats. Figueroa Mountain Brewing brought home a gold medal for its I Dunkled in My Pants Munich-style lager, bronze for its Figtoberfest, and bronze for its Once You Go Schwartz German-style schwarzbier. 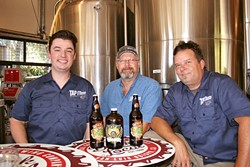 As it turns out, Central Coast Brewing Company isn’t a bad place to conduct an interview—especially when you’re chatting with a handful of passionate local brewers who live and breathe craft beer. It’s a lot like photographing a band of wild hyenas in their natural environment. I’m getting good stuff.

Growlers are sloshing, glasses are clinking, and everyone’s talking a mile a minute; it’s a boisterous combination of shop talk (hops, yeast), small talk (how are the kids?), and beard talk (OK, not really—but they do rock a lot of facial hair). Oh, and there’s quite a bit of dirty talk, too: The more the beer flows, the naughtier these brewers’ jokes become, and the more I forget that the tape recorder’s rolling. It’s true, friends: Brewers do have more fun!

You can blame that first pint buzz, but if you ask me, there’s a palpable excitement in the air—a shared feeling that the blood, sweat, and tears aren’t going unnoticed—not by local craft beer lovers nor the larger craft beer world. Right now, all eyes are on SLO’s craft beer explosion. These are the masters at work. Allow me to shine a light on their latest creations, many of which will be on full display during SLO Beer Week’s CollaBEERation event slated for Oct. 16 at the new SLO Brew Rock (noon to 4 p.m.; tickets are going fast!).

Libertine brewmaster and co-owner Tyler Clark is in perpetual motion, and he’s making good on his promise to expand his Broad Street brewery and tasting room into an epicurean hangout complete with restaurant and coffee shop (which will showcase Libertine’s line of barrel-aged cold brew coffees). You should know: The tasting room is always open during construction.

“What we do is unique to us; we’re proud to be a weird, funky brewery. It’s just what we do,” Clark said.

Starting Dec. 1, sign up for the quarterly Libertine Bottle Club and receive six new beers—delicious sours, saisons, fruit-infused brews, and all manner of barrel-aged beauties among them. A word of warning: When it comes to Libertine, always expect the unexpected.

For beer week: Check out a Q-and-A reception and dinner provided by Sidecar at Libertine Brewing Co. on Wednesday, Oct. 19 (tickets are limited). On Thursday, Oct. 20, attend a free bottle pour tasting at The Station SLO from 5 to 10 p.m. featuring food from the Station Wagon Food Truck and photography by local surfer and shutterbug The Keller Whale.

“We’re bringing Build that Wall, a collaboration beer with Brasserie Dunham from Quebec, Canada. It’s a stein-brewed beer we did here. They actually flew out from Canada and brought a bunch of foraged forest stuff—mushrooms, sticks. It’s a really cool, earthy saison. We’re also bringing a saison we made with Halter Ranch Winery with picpoul blanc barrels.”

SLO Brew’s got room to grow (and play)

There’s no denying it. SLO Brew has undergone some massive changes since settling into its new Higuera Street locale (new restaurant, new chef, a more laid-back music venue, rooftop lofts), but beer has not been left on the back burner. Not by a long shot. 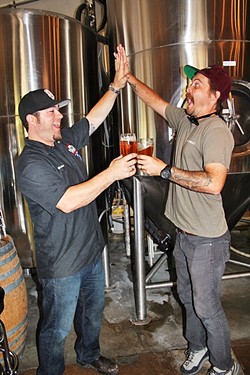 According to SLO Brew Brewmaster Steve Courier, the focus has been on getting the brewery’s four core beers—Original Blonde Ale, Reggae Red, Wave Wrangler Session IPA, and Cali-Weisse—into light, easy-to-carry 12-ounce cans (you might even say they’re good to pack on a hiking trip). That goal has been recently met; be sure to look for the primary-colored cans on your local grocery store shelves.

Courier is also most notably excited about the fact that the brewery’s new 30-barrel production facility, The Rock, will opening near the SLO Airport in mid-November.

“It’ll free up the pub to start doing more one-offs and more specialty brews,” the brewer said. “In the pipeline now, we’ve got a pumpkin pie beer with graham cracker flavor and allspice; we also just put out our German Vienna Lager on
Oct. 1 that we serve in steins at the pub. We want to start playing around more, to keep experimenting.”

For Beer Week: Catch SLO Brew Pint Night on Oct. 18 and sample the whole classic lineup, plus seasonal delights. Note: The CollaBEERation is kicking off at The Rock, affording beer geeks an anticipated first look at what is sure to be a whole new chapter in SLO Brew history.

What’s Courier bringing to the CollaBEERation?

“We teamed up with Re:FIND Distilery in Paso Robles, using some of their whiskey barrels; it’s a barrel-aged brown ale. We’re also trying to utilize some locally grown hops from Arroyo Grande to do a fresh hop ale with Figueroa Mountain. We wanted to make a blend, so we are thinking of taking our Wave Wrangler session IPA and their Lizard’s Mouth IPA to make a Lizard Wrangler.”

Go forth and Tap It!

Tap It Brewing Co. Head Brewer Ryan Aikens doesn’t mind the fact that Tap It Brewing Co. is tucked away in an industrial area of SLO—in fact, he likes “the whole off-the-beaten-path experience.” Fans have no trouble flocking to the brewery’s modern outdoor beer garden, where a lineup of IPAs, pale ales, browns, ambers, and their popular TropiCali Dank flow freely. Plus, there’s giant Jenga!

“It’s those hidden little gems where you can see your friends and hang out and not be in the hobnob of it all; that’s what we’re about,” Aikens said. “For SLO Beer Week, we wanted to go at it full blast, especially since people will be coming in from out of the area. We’re proud to host a warm-up event and then close out the week.”

For Beer Week: The brewery is hosting a free Beer Week Warm Up event on Saturday, Oct. 15, with live bands, food, and special beers on tap and closing the fest with an official afterparty with five local acts on Saturday, Oct. 22 (both events run from 4 to 9 p.m.). On Monday, Oct. 17, Aikens will be on the Q-and-A panel for Craft: The California Beer Documentary, showing at the Fremont Theater (tickets will sell out). Consider yourself a beer geek? You might want to hit the Woodstock Pizza Beer Olympics slated for Wednesday, Oct. 19. Bring your best beer knowledge and remember to twist the boot.

What’s Aikens bringing to the CollaBEERation?

“We’re teaming up with Central Coast Brewing Co. and doing a 100 percent brett-yeast fermented mosaic and hallertau blanc-hopped IPA with lots of fresh peach puree. It’ll be less barnyard, more fruit oriented, which will be accentuated by the hops, bringing out a ton of passion-fruit flavor.”

Putting Monterey Street on the map

Central Coast Brewing has seen its fair share of spotlight over the past two years, but the Monterey Street hangout is still a chill place to belly up to the bar and slurp down the best of SLO’s laid-back craft beer culture. With its famous Monterey Street Pale Ale taking a gold metal at the 2015 Great American Beer Fest and its Lucky Day IPA taking home gold at the 2016 World Beer Cup, you’re right to wonder what Head Brewer Brendan Gough’s got up his malt-scented sleeve.

“Competing against breweries I’ve idolized since I started drinking beer, it’s just been an amazing ride,” Gough said of the recent buzz.

For Beer Week: Get your lederhosen out of storage because Central Coast Brewing Co. is hosting an Oktoberfest celebration to remember on Sunday, Oct. 23, from noon to 6 p.m. featuring sauerkraut, brats, and potato salad paired with a half-liter take-home stein.

How do you recommend surviving a week of amazing beer drinking, Gough?

“It’s a long, fun-filled week. Go out, enjoy yourself, but hydrate, eat lots of bread. Just pace yourself,” Gough said. Added fellow employee Stormy Tee: “If you become a mess, you’re going to miss out on a ton of great beers. Nobody wants that.”

Hayley Thomas will be pacing herself as best she can with grilled cheese sandwiches and copious amounts of napping. She can be reached at hthomas@newtimesslo.com.