For years, Villicana Winery winemaker Alex Villicana saw a portion of his premium Paso Robles red wine swirl down the drain. It was almost unbearable to watch—not unlike the shower scene in Hitchcock’s Psycho.

Winemakers routinely “bleed” a percentage of free-run juice from their red wine grapes prior to processing. That part isn’t unusual. But Villicana is a problem solver and a firm believer in the fine art of upcycling. Perhaps, even, to a fault. In the midst of hectic harvest season, the winemaker would struggle to find time to preserve the precious pink-colored runoff for use in jellies and jams. Like a leaky facet, the lost juice haunted his soul. 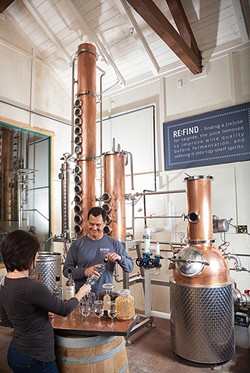 “We looked for years to find a viable use for this raw material. We knew there had to be another way, but nothing really penciled out,” Villicana said during a recent phone chat. “When we stumbled upon the fact that you can make clear spirits and flavored spirits out of that grape juice, it was that epiphany moment.”

The clouds parted and angels sang. In 2009, the winemaker and his wife, Monica, started on the path to creating Re:Find Handcrafted Spirits, now known as the darling of the burgeoning Paso Robles craft spirit industry. A hint of sweetness and luxurious mouthfeel round out Re:Find’s vodka. The distillery’s gin is equally impressive, imbued with juniper berry, coriander, orris root, lemon and orange peel, grains of paradise, and lavender. Both spirits benefit from a regional advantage: high quality grape juice base.

Think about it: Most distilleries use potatoes or grain to make their hooch because these items are cheap, not delicious. When life hands you pure Paso Robles grape juice, why not make killer booze?

That’s the question so many Paso Robles winemakers have been asking themselves these days. The newly formed Paso Robles Distillery Trail contains eight distinct distillery operations, each unique in their offerings (brandy, grappa, rye whiskey, and even Italian Nocino walnut liqueur, to name a few).

Now, the Distillers of SLO County trade nonprofit association, headed by Villicana, is gearing up for its first public event—and yes, you can bet this one will sell out quicker than you can say “straight up.” Villicana likens this event to the first-ever Paso Robles Wine Festival. At the time, no one knew how big the wine industry would get, but there was something in the air. It was electric.

“Being in the wine industry for 23 years and going to a lot of wine festivals and events, Fire and Ice really has that feeling,” Villicana said. “This really is a kick-off event. We are truly introducing a handcrafted product to the public, and we’re riding that first wave.”

“We have all been working together to get to the same end, but at the same time, we have this friendly competition trying to outdo each other to find out who can make the better cocktail. It’s the fun of the competition,” Villicana said.

It should be quite a show, what with the dance of cocktail shakers and clinking of ice.

Ryan Horn and David Vondrasek of Azeo Distillery are taking the “competition” one step further. Instead of crafting a creative cocktail, the duo plans to wow attendees with a show-stopping product on the rocks: their premium, Paso-made apple vodka.

The distillery name is actually short for the term “azeotropic distillation,” known to produce a cleaner flavor in spirits. According to the guys, its completely neutral in flavor—far from the flavored vodkas you’ve stomached in the past. Their brandy, much like a French eau de vie, offers up just a whisper of apple allure.

Vondrasek, a home winemaker, is the eager workhorse of the operation, spending long nights researching and experimenting. The pair met through Horn’s custom crush and bottling business, Vino Veritas in Paso Robles. It is there, in a corner of the industrial space, that the pair’s apple base bubbles in a glimmering copper still. Apple rum fermented with molasses is also on the roster.

Horn cut his teeth as assistant winemaker at JUSTIN Winery and now produces two small labels, Nacimento Cellars and Wasted Youth. It’s a fair assessment to say that he’s got quite a bit of experience under his belt in terms of production and equipment. Paired with Vondrasek’s scientific mind, Azeo may just be the next craft distillery to watch for.

“We do a lot of apple cider production here at Vino Veritas, so that’s what got us going on using apples,” Horn said. “We’re looking to have tastings happen right here, where it all happens.”

That’s still a ways off (the guys are finalizing their labels and getting their ducks in a row with all the paperwork). If they have it their way, visitors will soon be able to see how their premium apple cider juice is quickly and expertly distilled, making for a fresh-tasting libation. The end result is what Horn calls “the smoothest he’s ever tasted.”

Want to try it first? Fire and Ice is your destination.

As Vondrasek so aptly pointed out, you can’t imagine something awful going into a still and coming out tasting good. This, at its heart, is the reason why Paso Robles is killing it at the craft spirits game.

Put good in, get good out. I think that’s pretty good advice for making spirits—and forging new friendships, for that matter. If you do it just right, you’ll end up surrounded by plenty of both.

Hayley Thomas loves the sound of a vintage cocktail shaker doing its thing. She can be reached at hthomas@newtimesslo.com.