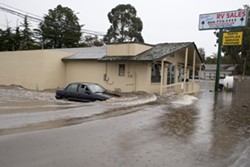 On Dec. 19, six San Luis Obispo County sewage systems were overwhelmed by heavy winter rains, causing tens of thousands of gallons of sewage to run into storm drains, flow into creeks, and seep into the Pacific Ocean.

The sheer volume of spills was so bad, in fact, that San Luis Obispo County Environmental Health preemptively posted hazardous waste notifications at every beach up and down the coast. According to Environmental Health Director Kurt Batson, it was the first time the department had done so.

Though the exact amount is murky, a safe guess is that about 25,000 gallons have leaked into SLO County waters—off Morro Bay, Oceano, San Luis Obispo, Pismo Beach, and Avila Beach—if not more.

Harvey Packard, enforcement coordinator for the Central Coast Regional Water Quality Control Board, said sewage systems fail for a number of reasons during heavy storms. Sewage overflows have easy access to water courses through storm drains that flow into creeks and eventually the ocean.

South County was hit hardest, displacing residents in Oceano and prompting worries the Arroyo Grande Creek levee might break. As of press time, crews had a safe hold on the levee—no uncontrolled breaches, according to the SLO County Office of Emergency Services (OES). Arroyo Grande High School is available to residents displaced by flooding. For more information, contact the OES at 781-5011.

Batson said his department was scheduled to begin taking ocean samples on Dec. 27 when the storms should pass. From there, they’ll determine which beaches can be reopened. Health risks from contact with contaminated water include eye, ear, and skin infections; sore throats; and colds. There was no indication from area hospitals that the public was getting sick as of press time.