The red canary was the worldâ€™s first genetically engineered animal, a project that began in 1920â€™s Germany, toward the end of a pet canary obsession that had already swept through much of Western Europe. It would be another 40 years before amateur scientists in England found success in breeding the crimson songsters. 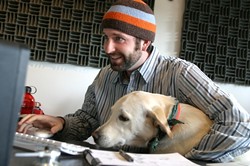 # Though hardly a big deal by todayâ€™s standards of cloning and bioengineering, these cheerful, delicate birds are unwitting symbols of the marriage of art and science, and of manâ€™s strange obsession with perfection. The red canary is also the trademark symbol of one of SLOâ€™s most forward-thinking design companies, a group fiercely dedicated to using the forces of technology and subtle artistry to produce high-quality web-based media dedicated to future success of local businesses.

Â Red Canary Productions was informally founded in 1998 at the home of then-Cal Poly students Todd Peterson and Noah Stokes, graphic communications majors with a penchant for hip, quirky design. The doors to their business officially opened four years later, the day after the two friends graduated, and itâ€™s been one multi-media success story after another ever since. Theyâ€™ve developed their talents over the years to embrace not only graphic design, but web production and cinematography, too, skills that enable them to consistently create cutting edge, high tech websites, short films, and promotional DVDs.

Â Red Canaryâ€™s client base ranges from Lifewater, a nonprofit organization devoted to providing poor nations with clean drinking water, to Tooth and Nail Records, a Seattle-based record company, to local church organizations, and Chic Blvd., a sort-of online girlfriend for modern women. Every project is unique, a sterling example of Red Canary Productionsâ€™ ability to grasp and respond to the needs of each individual company.

Â â€œWe tend to work with clients who want a creative approach to their websites, something whimsical and friendly, not totally corporate-looking,â€? says Peterson. He enjoys using metaphoric, or story-telling approaches to delivering his clientsâ€™ messages, something that allows both parties, the designers and the client, to be as innovative as possible. â€œWith online access, people can visit your business 24-7. That means you want an engaging portrayal, something that can speak for you, something that maintains that human, emotional element. Thatâ€™s certainly our goal.â€?

Â Peterson got the name for his company from a painting of a red canary a friend made him when he was going off to college. He hung it on the door to the room that eventually gave birth to his business, and he quickly began associating the painting with all of his feverish creativity, a blend of art and technology reminiscent of the groundbreaking work that brought the first red canary to light. With each new project he continues to expand his own abilities to dream, create, and entertain.

Â For more info about what Red Canary Productions can do for your business, call 543-4899 or go to www.redcanaryproductions.com.

Staff writer Alice Moss thinks life is for the birds. Send her your seed-feed at amoss@newtimesslo.com.