Creatures of the night: Freaking out the normies at KCPR's showing of 'Rocky Horror'

As I dash into the building to retrieve a memory card for my Cannon Rebel, I almost bump into a janitor who is vacuuming the darkened workplace. With ear buds in, the poor guy is completely unaware that he is indeed sharing oxygen with a ghoulish weirdo such as myself.

Ha! If only he had looked up to see me pumping my fist in the air while making the telltale devil horns right behind him.

Next stop, the Palm Theatre, where a flamboyant line is already snaking down the street. I am with my blue bewigged co-pilot Theresa Michelle Triplett, who is rocking a gleaming golden hair bow, white studded blazer, and tight black corset (she looks all the part of a Rocky Horror partygoer ready to do “The Time Warp”).

I have to give credit where it’s due: Miss Triplett is the one who coaxed me to attend this interactive showing of Rocky Horror Picture Show. After the passing of a mutual friend, she decided it was about time to start crossing items off the ole’ bucket list. Other life goals include running a 5K, which she has never done before in her life. I admire this adventurous streak in her, so that is why I’m here—hair teased to the heavens, red glitter in my teeth.

Also, I just love a good reason to “freak out the normies.”

We shuffle behind a gaggle of Cal Poly ladies clad in nothing more than lingerie and face paint. Thanks to teen years spent in the punk scene, we don’t care who stares.

As bold as we are, we are indeed virgins to this experience: overdressed, over-enthused, and a tad nervous. Although we’ve both seen the film dozens of times (My drama nerd sister sang songs from the soundtrack growing up), we’ve never attended a live showing. 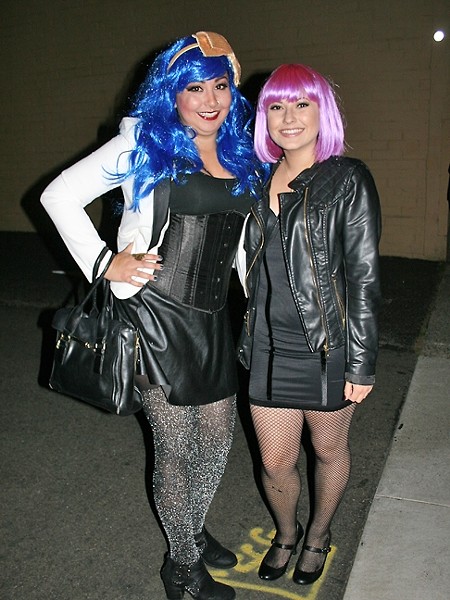 The Palm is cozy, so we assume there won’t be room for actors playing out the movie scenes—a beloved tradition in LA and San Francisco. But surely there will be some other interactive aspect?

Until show time, we wait, taking in the diverse crowd and posing for photos with new friends (we even meet a real-life Columbia who tap dances like a dream). Behind us, longtime KCPR DJ Charlie Blair holds a banana with purpose. He is the only person in line who has brought a prop from home.

The event is a fundraiser for the zany college radio station, so it makes sense that I would chat it up with one of the longest running—and most gregarious—DJs in SLO history.

“We used to go to midnight showings of Rocky Horror in the ’80s and ’90s all the time,” Blair says, gripping his fruit and pointing to a pin that says “Straight but not narrow.” “This movie is a cult classic for a reason.”

At the door, we are given blue plastic goodie bags. I snag a big tub of popcorn (with real butter), then make a beeline for the insanely packed screening room. Ahoy! I see former New Times Arts Editor Jessica Peña (not dressed up, but wearing a rare swipe of red lipstick) and intern Adriana Catanzarite who is wearing a tiny party hat, bow tie, and menswear-inspired garb (she is a live Rocky veteran, as evidenced by her dance moves).

Once in our seats, my friend and I delve into the mysterious goodie bags. They contain: A slice of toast (to be thrown at the screen when Dr. Frankfurter raises his glass to his muscular creation), bubbles (to be blown in lieu of rice during the opening wedding scene), a newspaper (to be worn on the head while Brad and Janet search for a phone in the rain), and more. Throughout the course of the film, we slap on rubber gloves, switch on miniature flashlights, blow on noisemakers, wear pointy party hats, and leap out of our seats to dance in the aisles to the infamous “Time Warp.”

One woman in particular quoted an entire shadow script of the film, sending the sexual innuendo and pop culture references completely over the top. 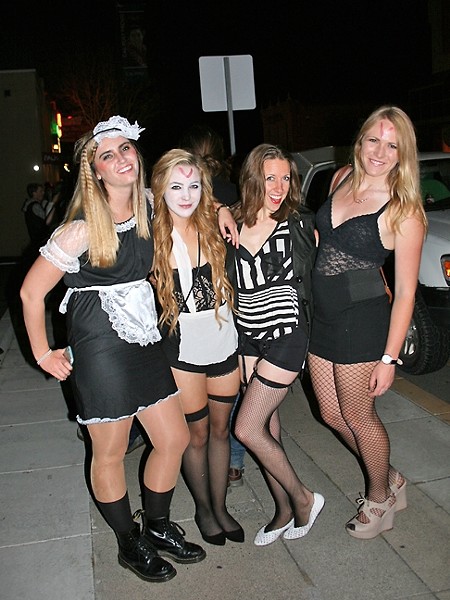 Oh, and I must say: Our friend Charlie Blair did proclaim the words “forbidden fruit!” at the appropriate time during the film (after both Janet and Brad have given in to absolute pleasure). He held his banana in the air like some majestic badge of weirdness. It was a magical moment.

Sweaty, jolly, and covered in real popcorn butter, we exited the theater and slithered into the cool night. It was 11 p.m., and I thanked my lucky stars that the showing did not begin, as many do, at the late stroke of midnight.

You can chalk that up to my getting older—perhaps even, more mature? An hour later, I officially turned 28. What better way to turn another year older than to have done something you’ve never done before (in glitter, no less)? I must thank KCPR for this strange and precious gift. Thanks to those crazy college DJs, I will never look at toast the same way again.

Hayley Thomas is still getting glitter out of her teeth at hthomas@newtimesslo.com.