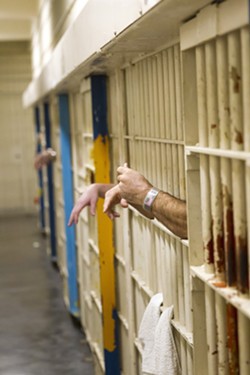 The suspect, Marco Cota Jr., allegedly murdered a homeless man on Nov. 20 after getting into a fight with him. The SLO County District Attorney's Office accused him of first-degree murder and mutilation and sexual contact with the remains.

But Cota had a Dec. 27 arraignment in SLO County Superior Court for a prior traffic misdemeanor charge stemming from an October incident. Cota was arraigned for driving a vehicle without a seatbelt while have a suspended license due to a DUI. Judge Tim Covello set his bail at $0 due to the emergency bail schedule, which means Cota could have been released from jail.

However, Cota is still in custody at the SLO County Jail for a slew of criminal charges he racked up over previous years, with the homicide being the most recent. The other charges include elder abuse, domestic violence, and parole violation.

Currently, three different levels of public defenders have been dismissed because the court found conflicts of interest when it came to providing ethical representation for Cota. With every dismissal, a lower level public defender is brought in for review.

"We call the fourth level the 'wheel' because it runs on a revolving basis," Gran said. "They [the court] have to keep going, so they might go grab another attorney out of Santa Maria."

Gran added that public defenders are usually dismissed because they represented either the current victim or witnesses in past cases. Cota's arraignment for the homicide is set for Jan. 10, 2022, where the fourth choice for public defender will be reviewed.

If he is found guilty on all prior charges and the homicide, Cota stands to receive a jail sentence of "65 years to life," Gran said. Δ