Creepy Crafters is online community market for makers of the macabre

Brad Golden has always been a big fan of two things: art and Halloween.

As a kid, Golden spent hours reading creepy comic books and scouring magazines for the perfect Halloween costume essentials. Back then, he said, if you wanted something like glow-in-the-dark vampire fangs, you'd have to order it from a catalog. Golden soon found that he had a knack for making his own creepy crafts.

"So instead of building model cars or planes," Golden told New Times, "I was building little monster models."

In adulthood, Golden honed his creativity into a career in graphic design and website creation in the '90s, when the internet was just becoming accessible. He stayed in the digital realm until recently, when, as an Atascadero resident, he started helping to produce SLO County's Halloween Harvest Costume Ball, which required his digital marketing skills and brought him back to his love of making horror props.

The two-story scarecrow, torture rack, and electric chair that Golden made for the Costume Ball landed him a gig at San Jose's infamous Winchester Mystery House in 2019 for its annual fall haunted house.

"Coming off of that, it was just such a fun, exciting gig and creating all this stuff," Golden said. "I wanted to continue creating and hopefully develop a business by making things I love."

He considered selling his props through Etsy, but found that there was a lot he didn't like about the platform.

"And it occurred to me that Etsy is generic in that it's just for artists and crafters and it doesn't matter what style of work you do," Golden said.

So Golden once again combined his digital design and marketing skills with his love for art and developed his own online marketplace specifically geared toward horror and Halloween artists. Creepy Crafters launched on Sept. 1, and already includes the work of about 2,000 artists from all over the world. Golden said about 5,000 buyers and collectors have also created Creepy Crafters accounts.

"It's kind of like having a home for all of us weird people," he said.

Artists can sell directly to a target audience, and buyers can find what they're looking for without wading through unrelated, non-creepy creations. 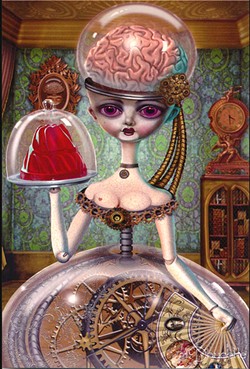 Bob Doucette, for example, is an Illinois-based artist who sells everything from large oil paintings and post-card-sized prints to sculptures and dolls. Everything Doucette makes falls somewhere between adorable and disturbing, and his work centers on surreal yet highly animated imagery. He has more than 19,000 followers on Instagram.

Despite his following, Doucette said he's never sold much of his work online, sticking mostly to gallery shows and sales.

He's investigated Etsy many times, created an account, but never actually launched a shop. Doucette said he's not very tech savvy. Plus, he said, Etsy is just so big and glutted with everything imaginable. People even sell underwear on Etsy, Doucette said.

"So when Brad [Golden] contacted me and he said he wants to do this for the artists," Doucette said, "anyone speaking that way is amazing because people don't usually think that way."

So Doucette built a Creepy Crafters shop. The online marketplace has allowed him to get closer to his whole audience, he said. He still sells big paintings in galleries, but now he can sell smaller drawings and prints at a lower price to fans who might not be able to afford a full-sized painting.

Another bonus, he said, is that someone at Creepy Crafters is always available to help with tech troubles. Doucette had an emergency issue one day before an auction on Creepy Crafters; Golden pulled over on the side of the freeway, answered his call, and helped him get things figured out.

That's what Doucette likes most about Creepy Crafters. Golden's vision for the marketplace is about building a community of like-minded artists and art fans who can support and inspire each other.

"I think that he's doing it for all the right reasons," Doucette said.

• The San Luis Obispo County Bar Association is soliciting tax-deductible donations to establish an endowment to provide scholarships to people of color hoping to work in law. The endowment will be administered by the Community Foundation and is an effort to provide greater access to and inclusion in the legal system to underrepresented groups. Visit slobar.org for more. Δ