If there was any doubt left that setting one management plan for the expansive Paso Robles Groundwater Basin would be a political and logistical headache, a room full of Creston landowners squashed it at a tense Oct. 8 workshop on the subject at Creston Elementary School. 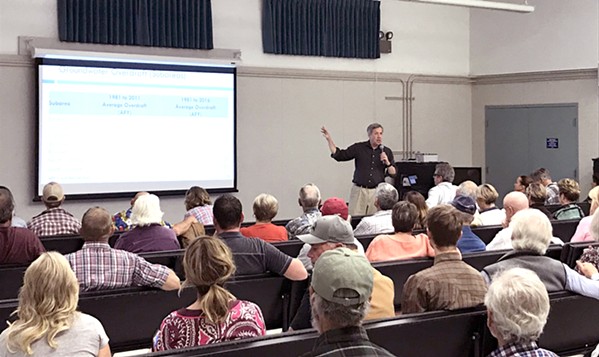 Agencies overlying the 780-square-mile basin are tasked with writing a 20-year groundwater sustainability plan to submit to the state by 2020, and San Luis Obispo County and water basin officials are holding forums with affected property owners in the seven basin "sub areas" to gather their thoughts on the process and what they want in future groundwater levels.

Several dozen Creston landowners attended and inundated hydrologist Derrik Williams with questions and concerns. Many expressed skepticism toward the data on the conditions of the basin, and took issue with the boundaries of the Creston sub-area, which includes the wine region of El Pomar near Templeton.

SLO County's groundwater model shows that the Creston basin area is in a state of overdraft (meaning that more water is pumped out than recharged each year). But the data presented failed to connect with some residents.

"I think where we keep getting caught up is as Creston people we really identify with our area fiercely," one meeting attendee said. "As we look at these numbers and we see them, they actually really don't communicate anything to us. For us, we're thinking, well, that's not our overdraft, that's their overdraft. So where's the data that just speaks to us?"

Attendees voiced frustrations with the growth of the wine and tourism industry throughout North County, suggesting that those factors have the most detrimental impact on the aquifer. But Williams said the basin's overdraft can be attributed more to a lack of basin recharge due to drought than the increase in demand. He acknowledged overpumping is one factor.

"I will admit that we are pumping more in this basin than we can sustainably," Williams said. "At the same time, people who own land and have invested in land have a right to use that investment. My job is to try to get to a place where everybody gets something out of this."

Williams asked the residents where they wished to have their groundwater levels at in the future. A prior survey of landowners suggested they wanted the levels where they were 10 years ago. The Oct. 8 meeting did not generate much consensus on that subject—other than a prevailing sentiment that water conservation should be a chief strategy to balancing the aquifer.