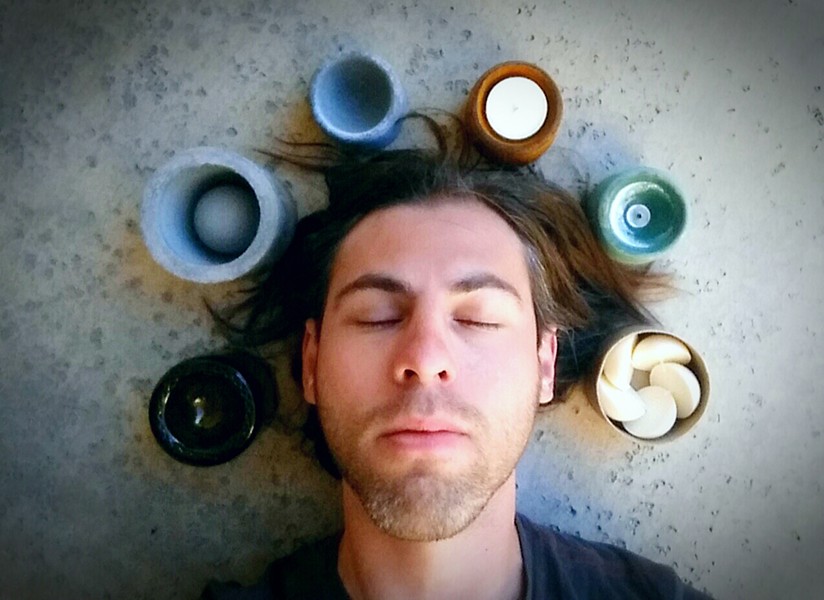 You could say that Benjamin Bartel was having a rough time. It was fall of 2014 and after reconsidering a career in music in Los Angeles, the Atascadero High School alum made the choice to move back in with his parents in Creston.

He was pouring wine in tasting rooms in Paso Robles and had a lot of free time and a lot of empty wine bottles on his hands. So he started cutting the bottles to make drinking glasses and art pieces. Then he took it a step further, and decided one day to pour concrete into one of the cut bottles. When it dried he cracked the glass off.

That concrete creation would go on to be stained with a dash of color and become the vessel for a lovely disk of soy wax infused with essential oils like vanilla, Palo Santo, and eucalyptus as part of Bartel's Key Flame Candle Co., which recently celebrated its third anniversary.

While Bartel has been a longtime fan of candles and often bought them to relax or set the mood for his creative spaces, he could never find a candle that was just right. They either burned super quickly or didn't smell that good. The glass container always had to be thrown away after the candle was all used up. And almost all the candles he came across were scented with a boatload of artificial ingredients.

"I realized that no one was really hitting it on the head," Bartel said. "No matter what candle I bought there was always something I didn't like about it."

So Bartel decided to go all in on making his perfect, ideal candle. He invested a good chunk of money in a set of therapeutic-grade essential oils and got to work creating in his parents' attic, taking inspiration from the aromas of the wines he was drinking and pouring. He started out selling his waxy wares at a small tasting room in Paso Robles, then another, and another. Today, Bartel's Key Flame Candle Co. goodies can be purchased at eight Central Coast locations, including Viva Paso!, Niner Winery, and Hands Gallery.

When people smell one of his candles, Bartel wants them to get a whiff of what rose oil, lavender, amyris, or anise actually smells like, in all its natural glory.

"It's supposed to show people what something smells like," said Bartel, who likened artificially scented candles to a margarita made with mixer. "There's just a drastic difference. You really get the real version."

Candle aficionados can take their time selecting their own uniquely stained concrete vessels, from ones that are tinged with grounding earth brown and red tones to bright neon greens and yellows. At a recent makers market event, Bartel said one customer took at least a good 15 minutes to select his concrete container. The candlemaker took it as a compliment and hopes it's something that they'll hold onto for a long time. In the meantime, he'll keep creating. Glass candle bowls might be the next Key Flame Candle Co. cv reation.