A week after Hurricane Katrina struck Louisiana, New Times Art Director Alex Zuniga and New Times photographer Chris Gardner both signed up to volunteer with the Red Cross to help in the hurricane relief effort. With little fanfare they received the required training and then announced to their co-workers that they would be volunteering their services for two or three weeks somewhere in the South. 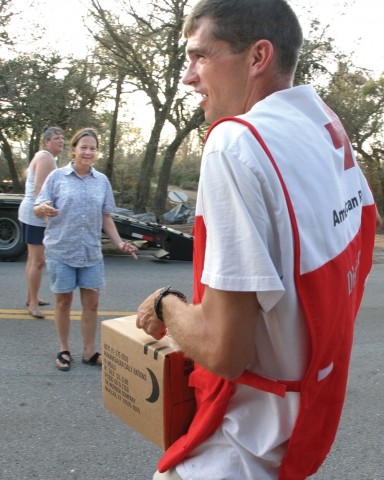 When Chris announced his plans in an editorial meeting, the general response was, "Are you taking your camera?" He told New Times staffers he was going as a volunteer, not a photographer, and so therefore he would not. Little did he know that Red Cross officials would later ask him to join the Public Affairs team as a photographer/reporter upon his arrival in Louisiana. He asked his wife, Mary, to ship him his camera gear.

When Alex arrived in Baton Rouge a few days later, Red Cross officials quickly found out that he had experience working with computers, so they located him at the Red Cross headquarters monitoring Material Support Services.

'The local chapter did prep us well. When we went we were expecting the worst. There were a lot of people who didn't expect that.'

Red Cross set up its headquarters in an old, empty Wal-Mart, and it was there that Alex helped coordinate the distribution of bulk goods while simultaneously keeping track of tax records.

"It was like a beehive," said Alex of the headquarters. "It was the epitome of organized chaos."

The scope and logistics of running such a large operation impressed him. "I got to see the logistical side and to see what had to happen for this thing to run. It was amazing to the see the inside of it." 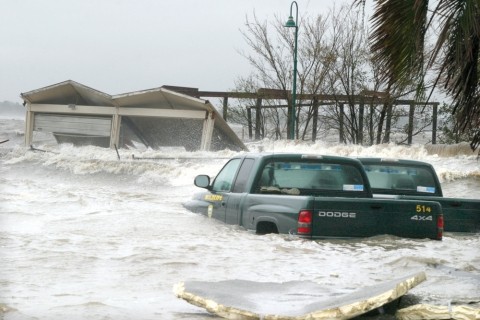 #Alex said he was especially impressed with how smooth the operation ran with such a high turnover rate of volunteers.

Alex and Chris are two of 170 SLO County residents who have already volunteered with the Red Cross for service down South. One-third of all the volunteers in the Gulf region are from California, said Sally Wise, acting executive director of SLO County Red Cross.

Alex and Chris occasionally saw each other at the Baton Rouge headquarters but Chris' assignments mostly took him around the state, where he photographed shelters and aid distribution.

On their fifth day in the South, Hurricane Rita struck.

"That was surreal," said Chris. "Some people were calm, some were panicked. Headquarters got shut down and the volunteers were evacuated and sent back to the shelters."

The operation shifted from disaster relief back to emergency status.

Throughout their 15 days of volunteer work, both Alex and Chris said being flexible was the key to avoiding stress and doing their part for the larger relief effort.

'I don't think I'll ever be involved in something so important and monumental and life-changing again.'

Alex and Chris credit the training they received from the SLO County Red Cross in helping them to anticipate stressful situations, long hours, and the need to be adaptable.

"The local chapter did prep us well," said Alex. "When we went we were expecting the worst. There were a lot of people who didn't expect that."

Both Alex and Chris expressed disappointment over what they think has been a sometimes-negative portrayal of the Red Cross in the media.

"There was a lot of criticism about how much money the Red Cross has spent," said Alex. "Well, look at what they're doing."

"They've no doubt saved thousands of lives," said Chris. "I don't think I'll ever be involved in something so important and monumental and life-changing again. It was one of the most rewarding experiences of my life."

Staff Writer John Peabody owns a camera but is not a photographer, e-mail him at jpeabody@newtimesslo.com.

You can still help