Crushin' it: As demand for grapes softens, growers are leaving clusters on the vine, fallowing fields, and pulling out older vines

Before you freak out about the headline on this story, hear me out: Markets swing. It's just a fact of economic life.

That swing played out in the housing industry, moving it from a buyer's market to a seller's market in the last decade. And it's doing the same in the grape industry, which was a grape grower's market. However, that pendulum is now on the grape buyer's side (i.e. wineries and winemakers).

"It's definitely a changing market, but we just have to ride it out and see what happens," Mindy Allen from Martinez Farming and Custom Vineyard Application said. "You know, we've been here before." 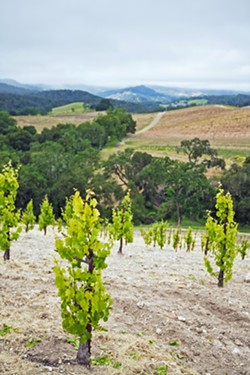 Allen remembers a huge crop year on the Central Coast in 2005. Prices for grapes dropped for a few years because large grape crops don't just affect prices in the year they were harvested. Grapes get crushed into wine (obviously), and as long as that vintage stays on the bulk wine market, the price for grapes holds at a lower price. Both 2017 and 2018 were huge crop years, and Allen said 2019 is setting itself up to do the same because of all of the winter rain.

Prices dropped as the tonnage of grapes available for sale increased. According to the California Department of Agriculture's Grape Crush Report for 2018 released in early April, Central Coast production was up 7 percent from 2017 and up 12 percent from the five-year average. Statewide, the total number of tons crushed in 2018 was up 7 percent over 2017 and set a new record of 4.28 million tons.

"I sold stuff last year on the spot market for $400 a ton, hand-picked, $200 a ton machine-picked," Allen said. "That's not even enough to cover your basic labor expenses."

Soon enough, she said, it will once again become a grower's market. In the meantime, though, farmers have to be smart. She said if growers don't have a contract with a winery to buy their grapes already in place, she's encouraging them to fallow their vines this year. Don't panic, though, it won't look like those scenes of empty dry fields in the Central Valley during the drought.

Basically, Allen said, she's telling growers to make sure their vines are sprayed, so they don't get mildew spores or any other diseases, but not to prune or send any labor in. Vineyards want to make sure their vines are clean going into 2020, but spending money to take care of grapes for harvest in 2019 doesn't make financial sense for a lot of vineyards, Allen said. With 2019 setting up to be as bountiful of a harvest year as 2018, there will be a lot of grapes and bulk wine on the market—and possibly a lot of grapes left on the vine.

"If you have a contract, be happy," she said. "Last year, some of wineries took in extra, but one particular winery sent out a letter last year to the growers, stating, 'In the future, we will only be taking what we are contracted for.'"

In 2018, the Central Coast harvested the third largest crop in its history—and, according to Audra Cooper from Turrentine Brokerage (a consultant/advisor for growers and wineries), it could have been the largest if all of the "tonnage on the vine" was harvested. But it wasn't. The market for grapes "softened," as people in the industry say, meaning: The demand is less, and prices are lower.

"It softened a touch overall because wine sales are not as strong in regards to growth as they were the last six to eight years," Cooper said. "Meanwhile, our supply has outpaced that growth."

Brands were growing in the double digits, Cooper said. But those numbers have declined to single digit percentages in recent years. In other words, brands are still growing, just not as fast as they once were.

Vineyard plantings on the Central Coast, which is the region Cooper covers for Turrentine Brokerage, increased over the last several years—and much of it was cabernet sauvignon, especially in the Paso Robles area.

"There's an element of that growth that really pushed the envelope in terms of new plantings, but you also had the dynamic of drought and water issues that really spurred, in my opinion, a lot of plantings in a really short time period," Cooper said. "We've essentially doubled the production of cabernet sauvignon in Paso Robles in the last six years."

The flurry of planting that took place in northern San Luis Obispo County occurred as the county's Board of Supervisors was discussing ways to curtail water use in the Paso Robles Groundwater Basin at the height of the drought. Wells were going dry, and many fingers pointed toward vineyards as the culprit. Eventually, the board passed an ordinance barring increased water use (such as a vineyard getting planted) out of the basin unless it's offset by a decrease somewhere else. 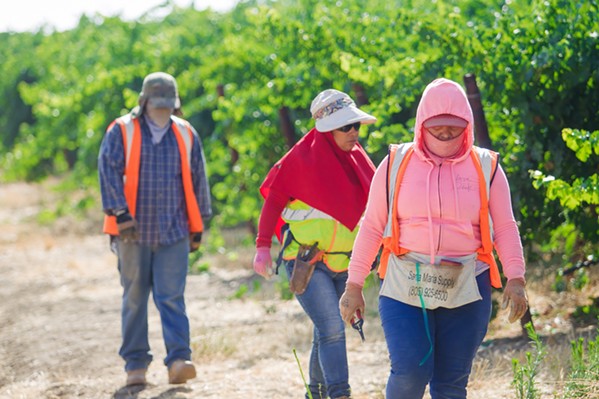 Cooper said the plantings that went in during that short time period would have ordinarily been planted over a 10-year period. In 2012, the crop yielded around 40,000 tons, Cooper said. In 2018, Paso Robles' cabernet sauvignon crop increased 13 percent over 2017 to 90,000 tons, an increase Turrentine attributed to "newly bearing acres."

That flurry of plantings has decreased to almost no new plantings. Allen with Martinez Farming and Custom Vineyard Application said they've only participated as consultants on a handful of new vineyard plantings in the recent past, and those are only vineyards with pre-plant contracts with wineries. Mesa Vineyard Management General Manager Gregg Hibbits agrees. New plantings are on a hiatus, he said.

There are some bright spots in the market, though, Cooper said. Grapes from newly planted vines (vines take three to seven years to bear fruit once they're planted, by the way) that are farmed in the right spot, in the right way, do have some demand, she said. Demand for older fruit has dropped off.

A lot of the vineyards in North County are older vineyards, planted in the '90s or earlier. The fruit off those vines is no longer of the same quality that it once was. The vines also no longer bear the same amount of fruit they once did.

"They're quality-challenged," Cooper said. "It's almost as if we're in a time of changing of the guard, where a lot of the older vineyards that perhaps used to make a specific style of wine or used to make a winery-specific targeted blend of wine, they're no longer able to do that on an annual basis."

Hibbits from Mesa Vineyard Management said the quality of the younger vines is definitely better than the older vineyards and some of those older vineyards are starting to pull those vines out. You can see the removals as you drive up and down the coast, he said.

"The market has been quite strong here over the last few years. In some cases, people held on to older vineyards due to demand," Hibbits said. "People are doing removals, and they're delaying replantings for a year to see what's happening."

It's a tough business to guess in, he said. When you plant for the market, vines don't bear fruit for a few years. So there's a risk to it, and growers are always working to try to figure out that piece.