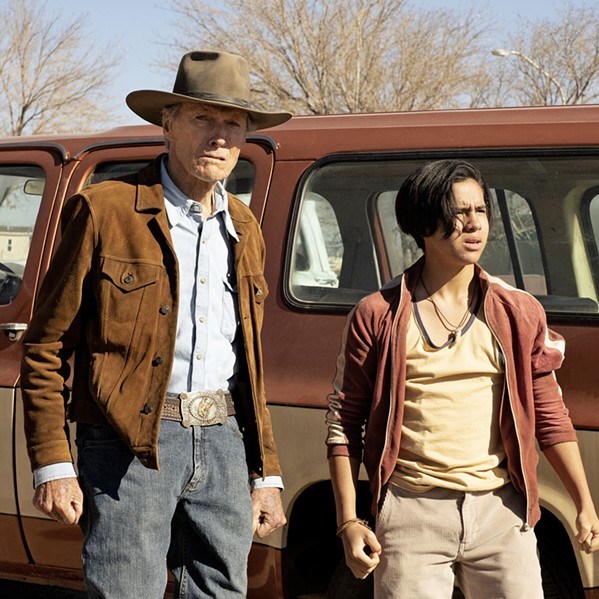 Glen I love Clint Eastwood's filmmaking, but he sometimes stumbles. The 15:17 to Paris was pretty unwatchable. A few films, such as Hereafter, are forgettable, but by and large, he makes quality, compelling pictures, many of which are outright masterpieces. While worthwhile, Cry Macho is one of Eastwood's lesser efforts. It's overly sentimental and suffers from amateurish acting in key roles. That said, it's fun to watch Eastwood, now 91, amble through a character near the end of his life who has a regretful past but hopes to redeem himself in his final years. Mike has lost everything but his integrity. Rafo, on the other hand, thinks being a macho man is everything. He even names his fighting cock Macho and longs to be a real cowboy like Mike. But Rafo, who ran away from his abusive mother, trusts no one. Living on the streets of Mexico City, he's an easy target, so his affected machismo is the armor he wears to protect himself. As they embark on the journey north, they must contend with Rafo's mother's henchman and the Federales, who've been alerted to a gringo taking a Mexican boy from his mother. Along the way, they encounter Marta (Natalia Traven), a widowed restaurant owner caring for her four granddaughters after the death of her daughter. Rafo discovers what a good parental figure is like while Mike provides an example of gentlemanly behavior. Maybe this angry street urchin is redeemable after all.

Anna Cry Macho is a solid example of an OK movie that's both watchable and forgettable. I don't want to slam newcomer Eduardo Minett, but it's clear this young actor still has some acting training work to do. He plays teenage angst just fine, but there isn't much nuance, and he tries too hard to be the angry "macho" version of his character. For Eastwood, this is an easy role to slip into—a gruff, standoffish cowboy with a job to do and not a whole lot of interest in forming relationships. The two do end up bonding, though, and their friendship is sweet. Mike is good with animals, and Rafo likes seeing that softer side to the tough cowboy. Why Rafo's father, Howard, wants the boy to come live with him seems a bit too wholesome, and we learn later that his motivations aren't pure. This is the story of a journey, of both old man and young boy getting a taste of an ideal world when they stumble upon the beautiful and kind Marta, and the reality of needing to continue past the comforting world she offers to them and finish their quest. It's not a life-changing story by any means, but it isn't a waste of time either—Cry Macho sits somewhere in the middle.

Glen In some of Eastwood's other more recent films—The Mule, American Sniper, Gran Torino, Mystic River—there's a lot more moral ambiguity and dramatic character arcs. This film and its characters are static and the story feels unfinished. What will become of Rafo? How will his father treat him? Will he learn to trust? All these themes and ideas are left sitting unattended. Eastwood does manage to allude to his longtime tough guy on-screen persona while also undercutting it: "This macho thing is overrated," Mike tells Rafo. "Just people trying to show that they've got grit. That's about all they end up with." But that deconstruction of Eastwood's macho persona isn't enough to elevate this film beyond cliché. It means to be wistful and elegiac but comes off as tepid, and Rafo's chicken manages to steal the show from its human actors. You're right: It's not terrible but not terribly good either.

Anna When you mention Eastwood's back catalog, it reminds me of just how good he can be both as a director and actor, so it's tough for a flick like this in the comparison game. Macho the rooster was definitely my favorite character here, with Marta coming in at a close second, and that's not great when the two leads take up most of the screen time. We do want these two in each other's lives, but the reality is they were never destined to be. What you said is exactly right—we don't know if Howard actually cares about his kid and gives him a good life. He's been an absent parent who seems to only want to bring Rafo to Texas when it benefits him, but we also learn that he's sent men on this mission before and no one has succeeded at pulling Rafo from his vindictive mother. Eastwood does a fair job at making us want to care about these characters, but honestly, the pool (especially in Rafo's case) is pretty shallow when it comes to actual character development. This film is in theaters, but it also comes with HBO Max, and for me that's the way to watch it. If you don't have HBO and want to see this cowboy action on the big screen, hit a matinee. Δ