Cuesta accreditation on the line

As Cuesta College officials digest information that their school is facing its last chance to save its accreditation, the message from the school is don’t panic.

“I will not let this particular blemish influence the way in which we perceive ourselves or the way the public perceives Cuesta College,” school president Gil Stork told press, teachers, and a few journalism students at a Feb. 6 press conference. 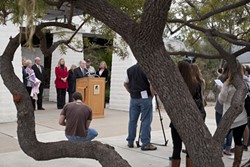 Just minutes before, Stork said he’d received his latest correspondence from the Accrediting Commission for Community and Junior Colleges (ACCJC). Cuesta is now under an order by the ACCJC to “show cause.” According to a Feb. 1 letter from ACCJC President Barbara Beno, “Show Cause is ordered when the Commission finds that an institution is in substantial non-compliance with its Eligibility Requirements, Accreditation Standards, or Commission policies or when the institution has not responded to the conditions imposed by the Commission.”

Translation: Cuesta has one last shot to save its accreditation status. While Cuesta largely disagrees with some of the commission’s recent conclusions, the college could lose its accreditation if school officials can’t appease the ACCJC by Oct. 15.

Cuesta must submit a “show cause report,” which will be followed by a November visit from the commission. If the school loses its accreditation, it would also lose its state and federal funds and potentially force the college to close. Cuesta is also required to submit a school closure report in the event it has to shut its doors.

Cuesta has been accredited since 1968, but was placed on warning status by the ACCJC in January 2009, and placed on probation one year later.

If Stork and other school officials want one thing to be clear, it’s that Cuesta isn’t doomed, and at the moment nothing has changed for students hoping to earn and transfer course credits. Asked if he was concerned that Cuesta will lose its accreditation, Stork told a few dozen media, students, and faculty members, “Not on my watch.”

According to the ACCJC, a number of colleges have been sanctioned. In fact, as of January 2011, the commission had sanctioned 21 institutions for deficiencies in various areas.

School officials seem surprised by the commission’s action. Stork said he and other officials believed they’d met the commission’s earlier requirements. However, the commission said Cuesta failed to meet certain standards including the completion of a strategic plan, and establishing a process for “regular and systematic planning, acquisition, maintenance, and replacement of its technology infrastructure … ,” according to its Feb. 1 letter.

The Associated Students of Cuesta College is coordinating a meeting between students and officials to deliver the news and answer questions. ASCC President and Student Trustee Kayli Mozingo said she wants to reassure students that the school is still accredited, classes still count, and credits still transfer.

“What ASCC is going to try to do is just spread the word that we’re offering just tons of summer school classes and they all still count to transfer,” Mozingo said.