Man of La Mancha shows at the Experimental Theater inside of Cuesta College's Cultural and Performing Arts Center from Oct. 27 to Nov. 5. The theater seats 100 people, and tickets are $15 per person. Visit cuesta.edu for more information.

Sometimes the line between reality and imagination gets a little blurry, yet crossing it is the only thing to do to maintain sanity. 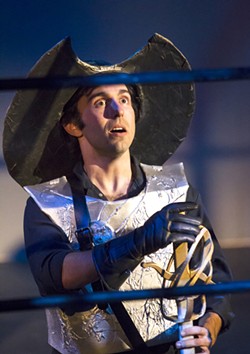 Enter Miguel de Cervantes, author of the legendary novel Don Quixote, only this time he's the protagonist in the Tony-award winning musical Man of La Mancha, set in a prison cell, a stage, and a courtroom. Is your head spinning yet? Oh, and the stage is also an actual metal cage complete with bars that the actors can't get out of even if they wanted to.

Artistic director of Cuesta College's drama program and director for the show, , said she has a soft spot for Man of La Mancha, which opens at the Cultural and Performing Arts Center's Experimental Theater on Oct. 27.

"It's one of my favorite musicals," said. "It's about hope and the possibility of a better existence, and in the present political situation that's a really strong message for everyone."

The set's metal prison was built by stagecraft students at Cuesta over the course of a few months and houses all the action for this hilariously tragic comedy. Cervantes (Tony Costa) and his manservant (Nicholas Coffey) are thrown into a dungeon during the Spanish Inquisition, where their fellow inmates attack them and set up a mock trial. If Cervantes is found guilty, he'll have to surrender all of his possessions. Not wanting to lose a manuscript to a play he's been working on (wink, wink), Cervantes takes a gamble and offers up a deal: He and all the other prisoners can act out the play together and then they can decide whether or not to burn it. Cue the madcap jokes and musical numbers that still manage to touch on heavier things like freedom, rape, and our shared humanity.

Cervantes transforms into Alonso Quijano (aka Don Quixote), an older gentleman who has read so many books on chivalry and thought so much about that he has lost his mind and decides to go forth and be a knight errant, while his manservant becomes his bumbling squire, Sancho Panza.

The director said that while many directors have struggled with how to differentiate between when scenes are happening in the dungeon or the play, she decided early on that the actors climbing up on the sides of the cage would mark a turn back to Cervantes' dreary imprisonment, and when actors were on the ground they would be off in another, brighter world as they acted out the writer's vision. The play feels magical with talk of quests and doing right by your enemies, yet also grounded in reality with all the actors wearing blue jumpsuits.

"I was interested in taking it to a place of timelessness and into a steel cage where there are more movement possibilities and it's more intimate for the audience," said.

Above all, hopes audience members leave Man of La Mancha feeling a tad more optimistic than when the show started.

"Every individual has a right to dream and a right to a life filled with hope, love, and respect," said. "We need to hear that message now."