After six months of interviews, public forums, and a narrowed-down field of candidates, Cuesta College announced Jill Stearns as its new superintendent. 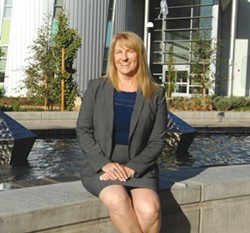 Stearns served as president of Modesto Junior College since July of 2012. She also held the positions of vice president of educational services, interim associate dean of student learning outcomes, and director of financial aid at West Hills College in the Central Valley. She also spent three years in the classroom as a teacher at Avenal High School in Avenal, California.

Under Stearns' leadership, Modesto Junior College was picked as one of 15 California community colleges selected to pilot a baccalaureate degree program. The college also restored its accreditation status, which it was previously on probation for.

Stearns said she's impressed with the current work of Cuesta and its students, and she hopes to continue that success.

"That mission of open access changes lives. Not only does it have the impact of moving an individual from a job to earning a sustainable wage, it also opens the door to transfer to a university," she said.

Former Cuesta College Superintendent Gil Stork announced his retirement in August 2017. He was employed with Cuesta for more than 50 years and led the college since 2010—he will officially retire on June 30.

Stearns takes over the college at a challenging time as Cuesta faces a $551,000 budget deficit.

Stearns' contract is set to officially be approved at the April 11 board of trustees meeting. She will assume the role of superintendent on July 1.