In a small building that houses community classrooms on the Cuesta College campus, there's one classroom with four rows of computers. A student from either middle school or high school sits behind almost every screen. They're not playing games or surfing the web, but they are learning how their computer operating system works. 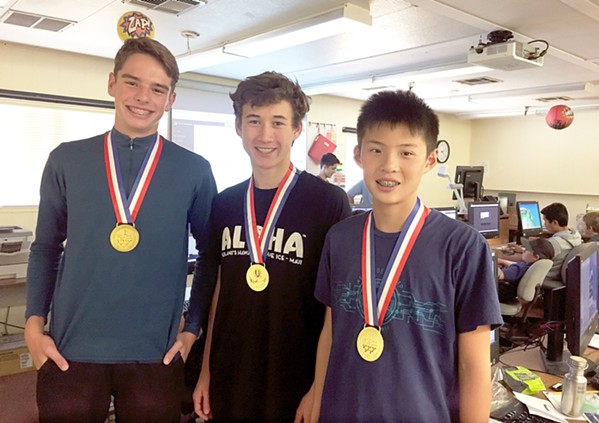 The students are enrolled in a one-week cyber camp for kids to learn how to protect their screens.

This is Ayen Johnson's first time teaching the camp at Cuesta College, and he said the curriculum from the class comes from Cyber Patriot. Cyber Patriot is a national youth cyber education program created by the Air Force Association. The goal of the camp is to inspire K-12 students into cyber security careers or other science, technology, engineering, and mathematics (STEM) disciplines.

Johnson said with the current high-level security problems and network issues at the national level, it's important that a program like this exists.

"Just look at anything in the news that has to do with hackers or cyber criminals, and every single second something is happening," he said.

In the classroom, kids work on two computer operating systems: Linux—a free and open-sourced software operating system—and Windows 10. The students basically act as information technology (IT) personnel, who usually troubleshoot computer issues at home or for a business. These students learn what documents, files, and accounts are on the software.

At the end of the camp, students get into groups of four or five and compete. They're given a request from a company to clean the computer system of any and all files that don't pertain to the business in three hours. Each item that's removed or account that's debugged is worth points.

Christopher Dahl (15), Edward Chiang (12), and Grant Broersma (14) nabbed first place on Aug. 3. Dahl and Broersma manned the screens while Chiang did the research.

"It's just really fun, and it's something that I enjoy doing. It's not a job I would mind doing in the future, but for now it's just fun," Chiang said.

With plastic gold medals around their necks, the teenagers said they learned a lot about the different types of malware there are, how computer software works, and how to block unwanted files.

"As much as it's interesting, it's also good to know how computers work because hackers are out there," Broersma said. "The likelihood of you getting hacked is lesser because there's billions of people in the world, but it could happen."

The camp gives the students a taste of the Cyber Patriot National Youth Cyber Defense Competition, which is open to almost all high schools. Johnson, the camp's professor, teaches a cyber security class at Coast Union High School and also advises the school Cyber Patriot teams. He said there are many unfulfilled jobs in the cyber security field, and he hopes that these programs, camps, and team competitions will get kids excited about this potential career field.

"By the time it's 2020, there's going to be 1.6 million jobs that are going to be unfilled, so we're trying to catch up before that happens," Johnson said.

On July 12 the Gay and Lesbian Alliance of the Central Coast (GALA) voted 9-1 to start the name-changing process. This month, GALA formed a name-change committee made up of interested members of the organization, past GALA board presidents, and group leaders. The committee will be meeting in the middle of August to discuss the organization's next steps—which include a budget and timeline. GALA Executive Director Michelle Call said the community is welcome to continue to suggest names, and the committee will narrow down the suggestions to three choices to be voted on by all GALA members. To learn more about GALA or suggest a name, visit ga lacc.org or call (805) 541-4252. Δ