A large crowd had gathered in the lobby of Cuesta College’s Cultural and Performing Arts Center. The chitchat was casual and mundane; the mood was relaxed—even jovial. That is, it was, until a woman emerged from the auditorium door to tell us it was time.

We lined up single file, the mood now tense in anticipation, and walked into the theater, nervous and uncertain. There was a deafening silence, and then a wild cry. Had someone brought an unruly child? Tripped over a seat in a panic? Oh no. 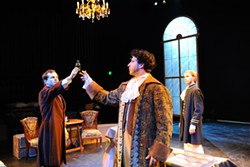 There, crawling among the seats and the crowd, were ghostly figures bearing pained expressions and tattered clothing. They scowled and howled as we took our seats on the stage. This is how Dracula begins.

It’s an appropriate lead-in to a show that thrives on visceral thrill. This Dracula is not the sanitized, glossy-haired fare of the recently released film from Universal Pictures. This is the real, blood-soaked deal—an adaptation by William McNulty of Bram Stoker’s original, legendary horror novel.

The play opens to more screams. A girl runs across the stage, smoke blurs the scene, lightning strikes, and the same ghastly cast from the seating intro begins to dance in contorted movements. The effect is bizarre and hypnotic. Suddenly, these eerie portents are gone, exchanged for the scholarly office setting of one Dr. Thomas Seward.

Two of his patients—his fiancée, Lucy, and her friend Mina Grant—have developed a strange and erratic sickness. A Dutch professor, Abram Van Helsing, arrives to consult and immediately notices two bite marks on Mina’s neck. At the same time, there are two other occurrences to contend with: a series of grisly murders in the neighborhood and the arrival of a new, mysterious neighbor from Transylvania. His name? Oh, come on. You know who it is!

In fact, everybody knows this. It’s Count Dracula. To spoil nothing and nobody, it’s Dracula who’s behind the bite marks, the murders, and the general atmosphere of monstrous chaos. But this is decidedly not a play about plot. We all know what happens, and it’s to the credit of director bree valle’s production that this Dracula revels in the delights of special effects and physical shock. 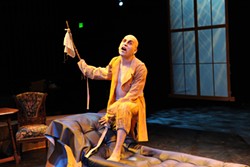 The lead-in, featuring inmates from Seward’s insane asylum, was just an off-putting aperitif to the visual scares and surprises ahead. In the tradition of the notoriously gory Grand Guignol theater, Dracula spares no expense on gushing blood and dazzling pyrotechnics. During one particularly stirring moment, when the grieved Dr. Seward must destroy his own fiancée-turned-vampire with a stake, the blood spurts with such altitude, a splash zone for the audience seemed a smart idea. In other moments, fire bursts from crosses when enemies approach, and a young maiden levitates from a bed to spooky and bewitching effect.

But the play is not all about its technical marvels. The blood, the fire, and the dry ice smoke are all sensational and startling in their impact, but only because of the suspenseful atmosphere created by the play’s cast, setting, and staging.

As Count Dracula, Bo Branum exudes both the elegant cunning and wrathful horror of the play’s titular character. Decked out in a velvet cloak, ascot, and powerful black boots, he’s what you would expect of the Victorian vampire. Upon first introduction, he’s exquisitely charming. And then, as his more sinister side reveals itself, he transforms into a monstrous beast with brute, physical power—stomping and leaping his way about the stage to the fright of many an audience member. It’s an effective performance only possibly outdone by Alejandro Jose Mendoza as the raving lunatic Robert Renfield.

Renfield is an unusual case. In the novel, he’s an asylum patient of Dr. Seward’s known for his impassioned monologues about consuming various animals. Here, Renfield is just as impassioned, but with far more levity. Here, he isn’t just “your garden variety lunatic” as he proclaims. He’s clever, self-aware, and disarmingly funny. With a madcap physicality and devious manner, Mendoza’s Renfield doesn’t just release the tension of the play’s terror or break up the sometimes lengthy moments of exposition; he offers an element of humanity amid the horror.

This isn’t to say the other performances aren’t considerable. They are, but Dracula isn’t necessarily a show about the actors; it’s a show about atmosphere, and this production succeeds skillfully in that regard. The minute you step into the theater and sit on the stage, you become intimately attuned to every bump, bristle, bloodspurt, and bellow that occurs mere inches away. The result can be as transfixing as Dracula’s own stare. Let it be known that, contrary to the character,

Dracula certainly does not suck.

Jessica Peña still wonders if that spot on her clothes is a bit of blood. Send her a message at jpena@newtimesslo.com.