As cases trickled into San Luis Obispo County in March, Cuesta closed its campus and canceled in-person classes. In an effort to limit person-to-person contact and reserve personal protective equipment, local hospitals also stopped allowing students into their facilities for the clinical rotations that are required for graduation.

But unlike nursing programs across the nation that were derailed by the pandemic, Cuesta found a way to continue classes through online instruction and clinical simulations, and by May, Maguire was able to graduate. That, she said, could only be described as a bittersweet moment.

"No one expects to graduate nursing school in the middle of a pandemic," Maguire said. 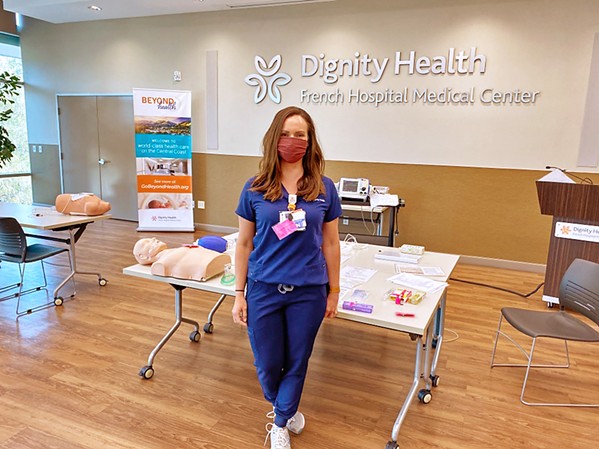 Maguire is one of about 20 recent Cuesta College nursing grads hired at Dignity Health hospitals in SLO and Santa Barbara counties amid the COVID-19 pandemic, an experience that Maguire said has been at once completely overwhelming and incredibly rewarding. Dignity Health has a long-standing partnership with nursing programs on the Central Coast and hires recent grads annually, but this year's group faced unparalleled and unexpected obstacles, both in actually graduating and upon entering the workforce.

When schools closed across the Central Coast in the spring, Cuesta transitioned to online instruction. So Maguire and her classmates worked through various scenarios and case studies over Zoom, discussing what kind of treatment they'd offer to patients with theoretical symptoms or diagnoses. By early April, Cuesta's nursing students were able to return to local hospitals for the hands-on clinical experience that Maguire said is vital to truly learning what it takes to be a nurse.

Shortly after her graduation in May, Maguire was hired as an RN at French Hospital Medical Center in San Luis Obispo, where she's worked with a few COVID-19 patients. She felt nervous about it at first, but then she thought back to all her training—the hours spent studying, the days working side by side with other healthcare workers during clinical rotations—and she felt lucky to be able to offer some kind of assistance at a time when so many feel like there's no hope.

"During the pandemic sometimes a lot of people feel helpless," Maguire said. "But we had just learned everything and gotten all of this training, and we were able to apply it."

Their help is even more important now that cases of COVID-19 are surging on the Central Coast and throughout the nation.

"While some of them do not work directly with COVID-19 patients, they are vital in supporting health care in our communities during the pandemic," San Juan wrote via email. "Their presence allows us to manage staffing levels in each department to best care for our patients."

• SLO Food Co-op raised more than $1,600 for Transitions-Mental Health Association in September and October, and now SLO's only community-owned grocery store is hosting a fundraiser for RISE, a nonprofit that works to provide crisis intervention and treatment services to survivors of sexual and intimate partner violence. Two percent of all Tuesday sales made at SLO Food Co-op will go toward RISE this November and December. For more information, visit slofood.coop.