There’s a strange noise coming from Cuesta’s Harold J. Miossi Art Gallery. Passersby are being assaulted with a cacophony—thousands of discordant piano notes that combine into one long, nightmarish tone. And things only get more weird and fascinating upon entering the gallery.

The usually well-lit space is dark and nearly empty. The eye is immediately drawn to a large moving picture projected on the bare wall. The video—Euan Macdonald’s 9,000 Pieces—is mesmerizing. It’s a string of loving, artful six-second shots of a bulky pale machine banging all of a piano’s keys at once; the hellish tone doesn’t let up until the video’s done. It’s beautiful, it’s abrasive, it’s thought provoking, and it’s just the beginning of what the gallery’s Still Moving exhibit has in store 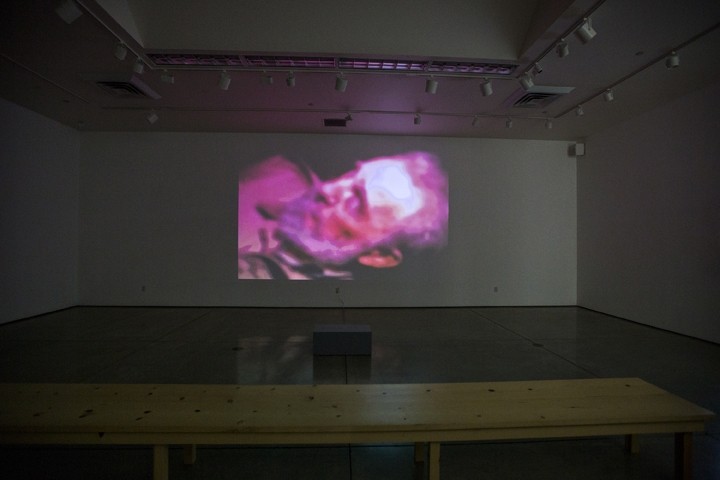 Still Moving is a celebration of the 50th anniversary of the Sony Portapak—the device that set off a whole movement of avant gard yet accessible video art.

“You won’t see this at SLOMA,” said David Prochaska, the Cuesta instructor who curates the gallery’s shows. “For San Luis, we don’t see things like this. This isn’t ‘art’ for San Luis—some people have a hard time rationalizing it, trying to put it into context.”

The exhibit certainly is difficult to contextualize if you’ve never seen video art before. But that’s what makes it so fascinating. Just seeing a few of the videos on display at the gallery gives you a whole new perspective on what visual art can be and how art can use the passage of time as a medium to explore and exploit.

Video art itself is hard to put in a category. It can range from a few-minute-long video of a piano-testing machine in China to a 20-minute video of a cataclysmic acid-trip dance party to a two-hour-long video of people doing manual work around the world.

Prochaska’s curation for the exhibit was deft. He picked videos that each represent a different facet of what video art can accomplish and made sure that just about every one of them tied into the exhibit’s central theme: artist Nam June Paik.

Paik is the father of video art. He started experimenting with the Portapak soon after its release and before long gained international acclaim for his video art pieces. Paik was a musician, a performance artist, and a member of the Dadaist “Fluxus” movement—all of which are influences that play into his video work.

Paik’s vision was prescient. In the ’70s, he foresaw that one day there would be a “Video Common Market” which would disseminate videos freely to anyone who wanted them.

“For us to get the videos from [Paik’s] estate was a big deal,” Prochaska said. “To try to make everything connect in some way to that, well, that’s just what we have to do as curators.”

Seeing Paik’s work projected on a wall in Cuesta’s gallery is truly an experience. His sometimes spellbindingly simple and sometimes wildly “out there” videos are about as far as you can get from the vineyard and ocean landscapes that SLO’s gallery-goers have come to expect.

Prochaska made sure to exhibit some work that shows off where the artists whom Paik inspired took the form. One of the show’s standouts is Phill Niblock’s The Movement of People Working. It’s a two-hour piece comprised of shots of people doing manual labor around the world underscored by a long droning tone.

“It’s very long and very meditative,” Prochaska said. “You just sit and build this relationship between the outside world and this inner sensation you get from sound.”

The exhibit also includes the work of an artist who is on the cutting edge of the movement, someone who’s bringing Paik’s ideas to the modern media landscape. In her videos, Petra Cortright deconstructs the culture of YouTube, taking apart the tropes of vloggers, cam-girls, and cute pet videos to force the viewer to think deeper about the form.

In Cortright’s Puparazzi, she distorts videos of a puppy and a kitten, making it look like they’re singing a Lady Gaga song while blushing, crying, vomiting, and burning. In this video, as well as the rest of her work in Cuesta’s gallery, she holds up a funhouse mirror to the new  media market. It’s ridiculous, repulsive, and expertly draws attention to just how absurd YouTube culture can be.

At any one time, there are only a few pieces on display in this showing—Petra’s work on an Apple laptop, Owen Kydd’s directional photographs, and one large video projected on the wall of the gallery.

“We usually just pile stuff in here,” Prochaska said. “I wanted something a little more minimal so that you’re forced into the image to take part.”

The central video rotates out each day, so each visit to the Still Moving exhibit will be a completely new experience.

“Bringing SLO into contact with different types of art is the Cuesta Gallery’s only goal,” Prochaska said. “We’re a teaching institution. What we should be doing is teaching students that there’s more out there. We’re not just showing paintings and drawings; we’re trying to show everything we can from as many different people outside of the area as possible.”

Intern Cliff Mathieson will follow you until you love him. Pupa-Puparazzi. You can reach him via Arts Editor Jessica Peña at jpena@newtimesslo.com.