While a pandemic and social divisions are seemingly pushing many Americans to the brink, San Luis Obispo County resident Lyle Nighswonger has an alternative message to convey. It's one of peace and unity, and the longtime local has a unique platform to reach thousands of people each day. 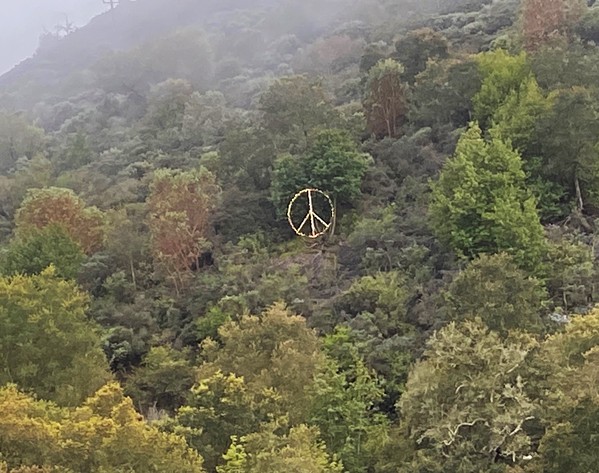 Atop the Cuesta Grade, drivers on Highway 101 can get a glimpse of Nighswonger's peace sign. It's 10 feet in diameter, built with the outer ring of an old satellite dish and 66 feet of stringed lights, and it's lit up 24/7 by solar panels.

"It's on my property," explained Nighswonger, a solar electrician who's lived on the Cuesta Ridge since 1993. "I really like it because it can be seen from the freeway. Just after you pass the grade, maybe a couple hundred yards, you can see it for a few seconds."

Nighswonger got the idea to build the sign about four years ago during Christmas season. He said he doesn't remember exactly what inspired the project, except that "I thought at the time it was something that was needed."

"I really am a peaceful person," he said. "And even though politically I'm very left, I try to get along with everybody. And I think that's what we need."

Nighswonger originally intended to just display the sign during the month of December to commemorate the holidays. But when his wife, Terri, passed away from cancer in 2017, Nighswonger decided "to just keep it on all the time." To achieve that, he had to upgrade the sign's solar panels, which sit atop a shed, and run the power cable through conduit to protect it from rats and other critters.

"It's now been on for a year and half without any interruption," Nighswonger said. "I love to hear feedback about it, how different people see it."

While the sign has received near universal appreciation since it went up, it carries even more weight and meaning during this current moment of COVID-19 and social unrest. Nighswonger said he hopes it reminds people to treat one another with respect and common decency despite our differences.

"I would hope," he said. "We can't even have a dialogue without politics [entering into it]."

The peace sign has been embraced by many locals. George Sullivan, a resident of the Santa Margarita area, told New Times that it is an inspiring symbol to him and others who drive the grade regularly.

"It affords a very subjective positive thought," Sullivan said. "Everyone's going to take it a little differently. I just know that a lot of people, when they drive over the grade and they see that, it's a remembrance that there are people thinking positively. It's out of context from what you hear on the news and people's daily pressures."

Sullivan said that while he's on the opposite end of the political spectrum as Nighswonger as a conservative, he appreciates the sign's nonpartisan, unifying message, as well as the resourcefulness and initiative it took to display it.

As for its future, Nighswonger said he has no intention of turning off the sign anytime soon.

"I'm hoping I haven't broken any sign rules," he said with a chuckle. "Who's not for peace?"

• Two Broads Cider Company is raising money through a Kickstarter campaign to complete construction of its first tasting room. The local hard cidery owned by Maggie Przybylski and Morgan Murphy has been brewing and selling wholesale ciders to restaurants for a few years, and the couple says they're ready to take the next step. "A tasting room has always been our goal," their Kickstarter reads, "a space to meet our customers, have fun events, and showcase a large variety of small-batch ciders." Funds raised in the Kickstarter will go toward the "finishing touches" on the tasting room, "from furniture to locally made artwork." The fundraiser goes until June 30. Visit kickstarter.com/projects/twobroadscider/tasting-room-and-patio-at-two-broads-ciderworks for details.

• Cass Winery in Paso Robles opened the Geneseo Inn this month. Featuring seven standard units and one suite, with 145 acres of vines, oaks, and hills surrounding it, the inn "is a nod to industrial modern design in the midst of wine country," according to a press release. Bookings are available at casswines.com/stay. Δ