After several months of speculation, sparked by an unusual amount of closed-door meetings by the district board of trustees, Cuesta College president Marie Rosenwasser will vacate her seat by year's end. 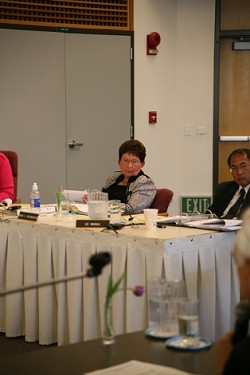 # As part of her resignation effective Dec. 31 Rosenwasser is set to receive 15 months of pay and benefits, amounting to roughly $210,000. Her current contract runs until 2009.

Word got out of Rosenwasser's potential departure in the early summer, when the closed-door meetings reportedly discussing the president's work performance and intended to last only through May continued after the failure of a $310-million bond measure on June 6. That lofty lump sum would have brought the aging flagship campus up to code and funded major expansions at the south and north county satellites.

Some insiders suggested that the president's heavy pitch to the board of trustees in February for the $310-million amount carried a hint of deception as to the public response to the proposed bond. Marilyn Rossa of the Cuesta College Federation of Teachers also vented at a recent board meeting that the college administration intentionally bypassed the input of educators in seeking out the bond figure. The college administration spent roughly $205,000 on the failed campaign.

Several trustees maintained that the green light given to the $310-million figure was a decision made by the board and not a situation manufactured by Rosenwasser and vice president Ed Maduli.

Board president Angela Mitchell declined to comment on the post-Measure G closed-door meetings' topic of discussion, but stated that board policy required the body to administer the performance review when it did.

"We would be in the same position now had the bond measure passed," Mitchell said.

"Measure G was the last straw," she said. "That's when the community response reinforced what faculty had been experiencing all along."

The president of the teachers' union cited micro-managing and autocratic control as two major grievances among faculty during Rosenwasser's tenure as head of Cuesta.

"In the beginning she was really into finding out what Cuesta was all about," Rossa explained. "As the years went on, she settled in and took over."

Rosenwasser was not available to comment on the criticisms or her plans in the coming months.

Regardless of the cause of the turnover, with the college leadership officially entering the stage of limbo, the board of trustees now bears the task of sorting out Cuesta's administration.

According to Mitchell, the board plans to address headhunting a new president during a closed-session meeting on Sept. 15 as part of a still-undrafted "transition plan" for the upcoming administrative change.

"We need to look at all the options that we have," she said. "An interim president is probably the most likely situation."

Mitchell added that the board plans to seek out the input of all parties including the teachers, who felt snubbed in the Measure G talks before deciding on a permanent replacement for Rosenwasser.

"It's not going to be a speedy process," Mitchell commented. "We want everybody to have their say."