Marcia Harvey's exhibit, Reimagined Journals, will be on display at the Cuesta College library in San Luis Obispo through the end of April. Visit cuesta.edu for more information.

Marcia Harvey didn't want anyone to read her journals. So she destroyed them. 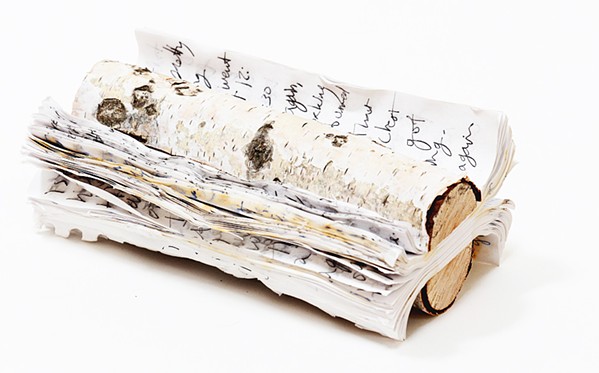 Page after page of all 28 of her journals—spanning from 1987, when she was a teenager, to 2008, when life got busy with marriage and motherhood—was systematically ripped out. Those were then reattached to pieces of wood to create small sculptural objects, drawings, and collage elements in paintings. Harvey's collection, Reimagined Journals, is currently on display at Cuesta College's library at the San Luis Obispo campus until the end of April.

"I wasn't sure I wanted anyone to read them," the Cuesta fine arts and printmaking professor said. "The idea of what you leave behind and who's going to deal with it became an issue for me when I had a son. But I didn't want to get rid of them. I liked that they would be around as objects still."

As a teen, Harvey was gifted a blank book, and her journaling obsession grew from there. She wrote about friends, day-to-day things, and unusual sightings like an owl flying by at the drive-in movie theater or a dead, half-eaten bird's wings lying on the beach.

"I don't know why I got hooked on it, but I did," Harvey said of journaling. "I would feel bad if I missed a day. I Ieft out pertinent details. You think you'll never forget."

Many of Harvey's pieces, like Birch Journal, feature journal pages affixed to wood in some fashion. 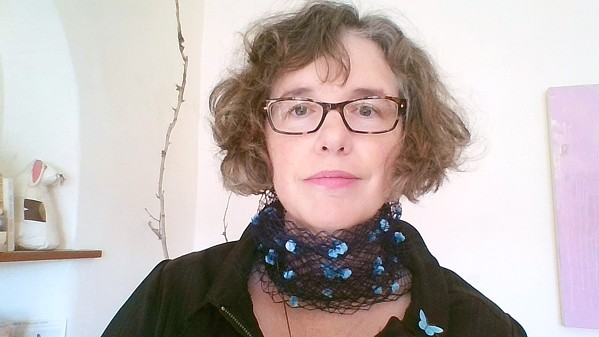 "I liked the idea of them still having mass," Harvey said. "It's not quite cliché as this was once a tree, but some vague idea of returning those things to some other life they may have had before."

Another of Harvey's pieces, Not Fade Away (An Un-Fine Romance), utilized pages filled with memories of a failed romance bound with measuring tape and attached to a piece of wood with one wheel to signify that the relationship would never go anywhere.

Until she deconstructed her journals to turn them into art, Harvey had never read or revisited her diaries after writing in them. She discovered that she'd been meaning to read T.E. Lawrence's Seven Pillars of Wisdom since 1992 (she still hasn't,), that she'd spent too much time worrying about grades and money, and that she'd underestimated her past self.

"I was surprised at how good the writing was because I didn't think much of myself as a writer in the early days, and I wasn't writing to impress," Harvey said. "It's just funny that you think the day you're in is the only day."

Harvey still journals to this day, though less maniacally than before. Most of her writing takes place on her blog, whereas her physical journals now tend to be filled with drawings, poems, and dreams.

Harvey chose to preserve the memories of two journals, one from a semester spent studying abroad in London and one devoted to Harvey's daily meditations on the sky, by transcribing their contents onto the computer. She said that the idea of destroying her journals didn't make her feel sad necessarily.

"You get that feeling of when you clean out a closet and you take out something you're not going to wear anymore," Harvey said.

Arts Editor Ryah Cooley writes in her journal infrequently. Contact her at rcooley@newtimesslo.com.