It was kind of like speed dating (but sadder) when faculty members and division chairs representing roughly a third of Cuesta College’s 74 degree and certificate programs were each given three minutes to beg for their program’s continued existence and answer questions from the College Council on the afternoon of Nov. 13. 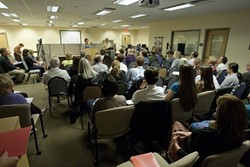 As part of the school’s strategy to meet accreditation requirements and address long-term concerns about financial stability, school officials decided earlier this year to reduce the number of programs offered at Cuesta. The recent passage of Proposition 30, a measure that increased taxes to help fund education and other state services, will ease the cuts, but some programs will still have to go.

“Whatever we do, we need to do it absolutely well,” President Gil Stork said. “We’ll reduce the breadth of our programs, but maintain the depth of the ones we have.”

Twenty-nine programs were originally identified for possible elimination; five of those, including Student Life and Leadership, volunteered for the chopping block. The College Council—which consists of 16 lead administrators, faculty members, classified employees, and student representatives—was charged with ranking the remaining 24 programs based on efficiency, fill rates, and importance to the community. Ron Ruppert, a biology instructor and co-chair of the council, said that the voting body was expanded to include division chairs so that a total of 31 people will contribute to the ranking process.

On Nov. 13, program representatives approached a podium in a packed room to outline the benefits their classes bring to the college. Most spoke rapidly, trying to pack as much information as possible into their strictly allotted time. All presented compelling cases.

“Theater provides us with a deeper sense of humanity,” she said.

The council and division chairs have until Nov. 20 to rank the programs individually. Their votes will be compiled into a master list, which will be given to president Stork. He has discretionary powers to adjust the list as he sees fit, and then it goes to the Planning and Budget Committee, which will decide how far down the list the college needs to cut in order to ensure its fiscal health. The Board of Trustees will settle the matter at its Dec. 12 meeting.