To register for a session now through March 29
in one of the portals in the Portals: Connecting The
World: A Social Practice Exhibition at Cuesta College’s
SLO campus, visit sharedstudios.com/cuesta.

I was a little nervous as I stepped into the inflatable gold pop-up structure, wondering what I should say or ask first. But before I knew it the screen flickered, and there sat Aparna Bakhle and José Godoy-Reyes right in front of me.

Although I was in San Luis Obispo at Cuesta College's Harold J. Miossi Gallery and they were in Los Angeles, it felt like we were in the same room, thanks to the floor-to-ceiling screen and clear sound in the makeshift structure, which is part of the Portals: Connecting The World: A Social Practice Exhibition going on at the campus through March 29. Emma Saperstein, gallery coordinator, aptly described the experience as "FaceTime on speed." 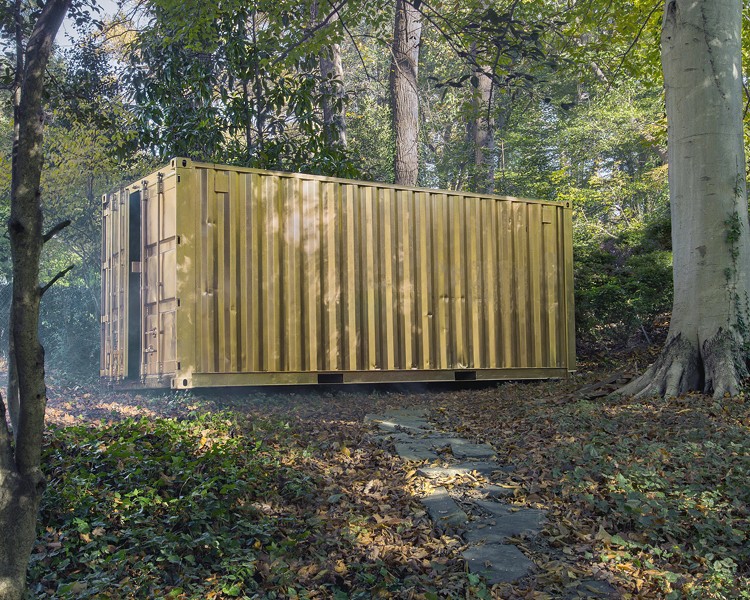 The portals at Cuesta connect students and community members to people in the U.S., Afghanistan, Australia, Germany, Honduras, Iraq, Jordan, Kenya, Mexico, Palestine, Panama, Rwanda, and more. So far people are using it to learn a new language, discuss health issues, collaborate musically and artistically, or just talk to someone new.

Bakhle and Godoy-Reyes are curators for some of the portals in Los Angeles. The concept is the brainchild of Shared Studios, started by Amar Bakshi, a former journalist who worked at The Washington Post and CNN. When travelling around the globe, Bakshi noticed that the best conversations he had with people were on the bus or at the grocery store. He wanted to bring that experience of connection to people everywhere. While the portals to date have been mostly used for arts and culture, the one Bakhle and Godoy-Reyes are in is being used in a criminal justice research project, which allows people who live in highly policed areas like Baltimore or Mexico City to anonymously share their experiences.

"I get to invite people to engage with a portal," Bahkle said. "It's definitely not a set-up I've experienced before."

Saperstein said she was put in touch with Bakshi through a mutual friend and knew the portals would be a perfect fit for Cuesta.

"I fell in love with the project immediately," Saperstein said. "I grew up traveling as a child, and I really long for those experiences again."

Saperstein isn't alone in that sentiment. On a giant chalkboard in the gallery by the portal, people have written things like, "Lovely and creative," and, "This is so cool! I made a new friend in Mexico and I'm so excited for the next connection."

While some portals are connected with a specific class or project, other portals have open time, where participants are prompted with a question like, "What would make tomorrow a good day for you?" or, "What's the story of your name?"

Eventually Saperstein hopes the portals might find a permanent home somewhere in SLO. In the meantime, they could potentially make appearances at Cuesta's North County Campus or even at the downtown farmers' market in SLO. Overall, Saperstein said she hopes the experience fosters a sense of connection among participants.

Arts Editor Ryah Cooley's connection is a bit delayed at