Culture shock and the American Dream

According to Jeff VanKleeck, gallery coordinator at the Cal Poly

# University Art Gallery, when you look at Bill Owens' "Suburbia" photos, you can't help but laugh but you're laughing at yourself.

The iconic images present a materialistic suburban world of disposable income and nuclear families scenes of Fourth of July parades and block parties so all-American that you're almost ashamed to recognize them so readily. But the true genius behind these photos is the humor and irony that underlies each one, from an image of a family rolling out its green lawn to an entertainment center housing now-outdated technology.

It's easy to imagine the photographer who captured those suburban images of the late '60s and early '70s now driving across the country photographing Cosctos, Starbucks, Bed Bath and Beyonds, and bacon which is exactly what he's doing.

"Really, the center of the universe is Costco," Owens explained wryly. "That and Starbucks. I specialize in nothing shots. I think Bed Bath and Beyond is interesting, and I want to take a photograph of it. I've been in there dozens of times and I haven't figured out how to photograph it yet."

The difficulty of shooting something like Bed Bath and Beyond or Costco so large and familiar that a shopping trip for sheets becomes an experience is conveying the overwhelming, near-iconic experience of shopping there. And getting around the fact that chain store policies rarely allow photographers to take pictures inside. Over the years, Owens has learned that the best method of circumventing security is to take pictures during the holidays, when there are larger crowds and other people are more likely to have cameras.

Owens has spent the past five months driving across the country, taking pictures of the ordinary places and things that capture his attention including the food he consumes along the way. He's also been making movies for the past five years, a hobby that developed, he jokes, when he discovered a "movie" button on his camera. His interest in photography dates a bit farther back.

In 1966, while volunteering for the Peace Corps, Owens began taking pictures. After he completed his commitment to the group, he decided to enroll in college and study photography. He eventually became a photographer for a small newspaper in Livermore. His job afforded him an abnormal degree of access to the community, and he noticed details about his surroundings that others took for granted. 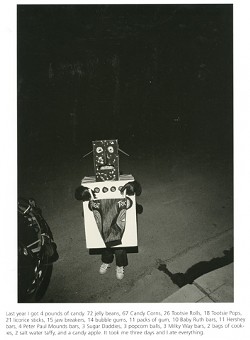 # "My first job was working in suburbia, and I just went into culture shock," he explained.

Fascinated with the opportunity to explore what it meant to be a middle-class American, Owens began shooting, sticking mostly with acquaintances and friends, but also placing classified ads in the paper. For 52 days one day each weekend he went to people's homes and photographed their families, their dogs, their possessions. After that first year, it would be another two years of editing and planning, but eventually the black-and-white photos he had taken would become "Suburbia."

Several decades have passed since Owens spent his year capturing the American dream in action, but the unrelenting trickle of time has done little to lessen the relevance of the images. According to Owens, the fact that his work generally falls below most curators' radar means that any gallery that actively pursues an exhibit of his work has a hip proprietorship. Whether the University Art Gallery is hip is a matter of debate, but VanKleeck claims that the gallery is really striving to be relevant.

"I think there's parallels to what Owens photographs and what's going on here," he explained. "It's the same ideas and the same things we're doing today. It's just the clothes that have changed. It's interesting to see how, over time, things have changed and things have stayed exactly the same."

Owens also said that he had a larger purpose when he began his project. His concern about the degree of mass consumption that accompanied the suburban lifestyle drove him to document this world. A healthy disgust for artists like Norman Rockwell who quite literally painted the American way of life in rosier hues than were honest also spurred him to capture the world that had initially sent him into a state of culture shock.

But capturing images of his subjects' lives wasn't enough. He wanted their words and perspectives as well. Just before "Suburbia" was released, Owens' editor asked whether he had obtained signed releases from each of his subjects. He hadn't, but editor and photographer agreed that if Owens was going to run around Livermore getting releases signed, the book would also benefit from quotes from the subjects about their photographs. A photograph of a woman holding a baby and standing beside a sink full of dishes is almost contradicted by the question, "How can I worry about the damned dishes when there are children dying in Vietnam?"

For Owens, the contradictions between the photos and the quotes were often as revealing as the images themselves. For example, he showed a subject an image of him standing by a car, and the subject referenced his love of gardening.

"I think we're all full of these kinds of contradictions in life," Owens added.

Some of the quotes are just plain humorous. A child in a Halloween costume enumerates the fact that the year before he had gotten four pounds of candy.

In 1975, Owens released another book of photography, Our Kind of People, which was followed by Working: I Do It For the Money in 1977. Eventually, he was fired from his job at the newspaper and he came to the conclusion so many others had: Art doesn't pay. He went to his CPA and asked how one went about making money. The CPA handed him a limited partnership and Owens became a brewer. In 1982, he founded Buffalo Bill's Brewery in Hayward. He later founded and published American Brewer magazine. And later still, he founded the American Distilling Institute, which currently has about 100 members. Owens receives mail from distillers all around the world. One of his first correspondents, much to his surprise, was a distiller in Nepal.

Like most other artists, Owens manages to juggle his career with his passion for photography, so it makes sense that the "Suburbia" exhibit would have an interactive component allowing guests to express their own visions of San Luis Obispo. According to VanKleeck, guests at the exhibit can fill out an application and bring in their own suburbia photo. Selected entries will be displayed during the exhibit.

"There's a strangeness to looking at the area around you with a more critical eye," VanKleeck said. "If anything, it gets you to look around and try to pay attention."

"Bill Owens: Suburbia" will be on display at the University Art Gallery through October 24. The gallery is located in the Dexter building (34), room 171 on the Cal Poly campus. There will be a reception Sept. 21 from 6 to 8 p.m. The gallery is open Tuesday through Saturday from 11 a.m. to 4 p.m. and Wednesday from 7 to 9 p.m. For more information visit www.artdesign.libart.calpoly.edu/uag.php.

Arts Editor Ashley Schwellenbach is the nemesis of the suburban lifestyle. Send weapons of mass destruction if you can find them to aschwellenbach@newtimesslo.com.