As he sees it, losing California's last nuclear plant, which generates 9 percent of the state's power and employs hundreds of locals, is a shame.

"Why are we taking offline a perfectly good nuclear power plant?" Cunningham posed. 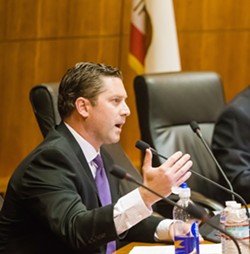 Without any luck convincing a bankrupt PG&E to change course, Cunningham is turning to Sacramento to try to make a significant reversal of energy policy that could keep Diablo Canyon a part of California and SLO County's future.

On Aug. 28, Cunningham introduced a proposed state constitutional amendment to classify nuclear power as a renewable energy source—which would make the plant worth an estimated $3.6 billion, Cunningham said.

Nuclear energy is not currently considered renewable by the state, and therefore it's arguably not economically viable to produce, as the state pushes toward an 100 percent renewable grid.

Cunningham's amendment would bar the state from passing energy policy in the future that's not "technology neutral."

"Unless nuclear power is classified as a renewable, it doesn't make any economic sense for PG&E or anybody else to continue to run Diablo Canyon," Cunningham said.

In response to his proposal, PG&E spokesperson Suzanne Hosn told New Times that the company has no intention to change course on decommissioning the plant.

"The state of California has clearly indicated its position on the future of nuclear power," Hosn said. "This proposal does not change any of PG&E's plans for Diablo Canyon."

Cunningham said while that may be the case, PG&E's bankruptcy proceedings open the door to a possible third-party acquisition.

"Now that they're in bankruptcy, their assets aren't entirely their own anymore," he said.

Put forth at the tail end of the legislative year, Cunningham acknowledged that the proposal is unlikely to gain traction in the next several days. To pass, it would require two-thirds majority votes from both chambers, and then voters' approval.

His intention is to a kick off a conversation that he plans to pick up again in 2020.

"It's important we start these conversations about whether we can really achieve decarbonization of the energy grid without nuclear power," Cunningham said. Δ