A new bill introduced by Assemblyman Jordan Cunningham (R-San Luis Obispo) would make public the personnel records of police officers who are accused of sexual assault—even in cases where the officer resigns before an internal investigation is completed.

Last year's landmark police transparency legislation in Sacramento—Senate Bill 1421—made these officer investigatory records accessible to the public for the first time. But they technically only apply when an internal police department investigation yields "sustained findings." 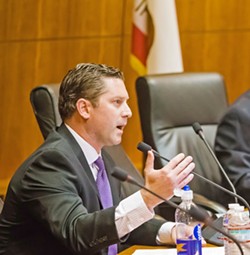 Cunningham is looking to extend the public's access in circumstances when a police officer prematurely resigns. He said the bill is a direct response to what transpired after rape allegations were levied against former Paso Robles Police Officer Chris McGuire. After three SLO County women accused McGuire of rape and sexual abuse, he resigned before the city finished its internal investigation. When local media outlets asked the city for records on McGuire, they were stonewalled for that reason.

"We're trying to fix that loophole," Cunningham told New Times, "and make it so if someone elects to strategically resign, the public still has access to that information.

"If this happened once in SLO County, which is 270,000 people, it's probably going on elsewhere in California," he added. "It's a fairly glaring loophole."

Cunningham said he's already received a letter in support of his bill (Assembly Bill 1599) from the Public Defenders' Association. He hopes that law enforcement associations will also get on board, noting "everybody benefits from the truth and facts being known."

"The [police] chiefs themselves, they don't want to get sued for hiring someone who has these problems," Cunningham said. "When I talk to individual cops and law enforcement I'm friends with, they have no problem with this."

AB 1599 will start its journey through the Legislature at the Assembly's Public Safety Committee. Δ