Central Coast Assemblymember Jordan Cunningham (R-San Luis Obispo) is joining a growing group of California lawmakers opposed to a proposal by the Trump administration that would end the state's ability to set its own emissions and fuel efficiency standards for vehicles.

The resolution is in response to a proposal by the federal Environmental Protection Agency and the National Highway Traffic Safety Administration (NHTSA) that would freeze fuel economy standards nationwide and eliminate California's waiver for the Clear Air Act, which allows the state to create its own more stringent efficiency standards. The state has received 130 of those waivers over the last 50 years, with former Gov. Ronald Reagan securing the first one in 1972.

"Previous administrations in both parties have granted this to California," Cunningham told New Times. "I think there's an enormous benefit in letting states, when it makes sense, to go above and beyond."

If it passes, the resolution will be transmitted to President Trump, the congressional leadership of both parties, and the administrators of the EPA and NHTSA. Under federal rulemaking guidelines, the two agencies will be accepting public comments on their proposal for the next 60 days. Cunningham encouraged concerned constituents to submit comments. 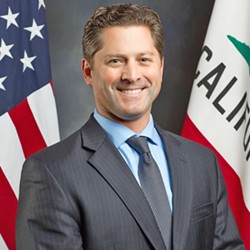 While Cunningham's resolution makes its way through the legislative process, other state officials are already preparing for a fight to preserve the state's standards. California Attorney General Xavier Becerra pledged to use "every legal tool" to fight the proposed changes, while the California Air Resources Board released a proposal on Aug. 7 that would require U.S. automakers to meet the state's existing standards regardless of whether the Trump administration sets lower ones elsewhere.

"California will take all actions to ensure that the smart standards we developed in partnership with the auto industry to cut greenhouse gas emissions from vehicles stay in place," Air Resources Board Chair Mary Nichols said in a written statement.

Cunningham's resolution has bipartisan support, making rolling back the standards an issue where the state's lawmakers break from the Trump administration and Republican members of Congress.

"I think there are areas where California Republicans chart their own course. This is one of those cases," Cunningham said. "Clean air isn't a Republican or Democrat issue."

Whether local Republicans feel the same way remains to be seen. Cunningham and seven other Republican lawmakers drew the ire of the conservative voters and some party officials after voting to extend the state's "cap and trade" program, created to combat climate change, last year. A joint statement co-signed by six GOP Party chairs, including SLO County Republican Party Chairman Randall Jordan, expressed disgust with the group of eight, and characterized their vote as a "betrayal."

Jordan declined to comment on Cunningham's current resolution in an email response to questions from New Times. Δ