Assemblyman Jordan Cunningham (R-San Luis Obispo) recently joined a statewide initiative to get outdoor youth sports back up and running amid the pandemic. 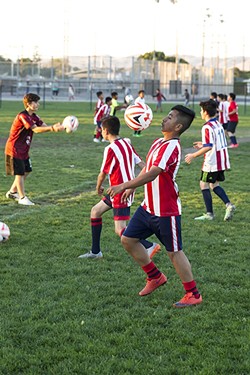 In a Feb. 5 letter to Gov. Gavin Newsom, Cunningham and more than 30 other state legislators from both sides of the aisle argued that California's kids are in dire need of some kind of in-person socialization and activity. The letter is part of a larger state campaign called Let Them Play, which is pushing for the reopening of some youth sports.

"As we know, the effects of pandemic isolation on children have resulted in mental health issues including anxiety, depression, and increased rates of suicide," the letter reads. "There is also an alarming equity disparity on children from low-income communities, as private schools and exclusive club teams continue to participate in sporting activities by traveling outside of California, which is against current guidelines."

Cunningham has kids of his own, and he said it's obvious how detrimental the pandemic has been for their learning growth and mental health. So many things, including sports programs, have been taken from them in the last year. But kids, he said, are at low risk of contracting COVID-19 and developing severe symptoms. With safety restrictions in place, Cunningham said allowing some sports could be an easy way to offer a source of joy to kids in these difficult times.

"Maybe indoor basketball has to wait longer," Cunningham said. "That's fine. But right now, the situation is that virtually nothing is allowed."

While some community members have brushed off the idea as unimportant compared to issues like the vaccine rollout, Cunningham disagrees. Sports teach kids about teamwork, discipline, how to make mistakes and move on, and how to accept defeat.

"Big important life lessons for kids are happening," he said. "It's not just about exercise. And we've taken that from them for almost 11 months, going on a year."

Newsom addressed the issue at a press conference on Feb. 9, where he said he and leaders of the Let Them Play initiative are negotiating a path forward for competitive kids' sports. Δ