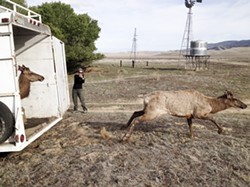 Ask a Californian what comes to mind when you say “Central Valley,” and most will probably give you an answer that includes farms, orchards, farms, an occasional feedlot, and more farms. You may also get something about air conditioners, or high-speed rail, or oil. What you likely won’t hear is a mention of wildlife and marshlands.

Nearly 200 years ago, the Central Valley—which some say is among the world’s most altered pieces of land—was a dramatically different place. An entire ecosystem thrived among oak woodlands, marshes, sloughs, streams, and grasslands. The same conditions that made wildlife happy also attracted farmers who drained the marshes, tilled the soil, and built fences. Cities followed.

The land is now one of the most productive farming regions in the world. Over time, wildlife populations began to dwindle—especially the tule elk, a subspecies of elk found only in California. Agriculture’s spread brought habitat loss, and the elk became a popular sight in the crosshairs of hungry gold miners. At one point in the mid- to late-1800s, tule elk were so scarce some thought they’d gone extinct.

Now, thanks to a series of repopulation efforts, tule elk are alive and well. Most recently, in April, the California Department of Fish and Wildlife (CDFW) and the United States Fish and Wildlife Service (USFWS), with the help of other wildlife organizations, underwent the laborious process of capturing 36 elk at the San Luis National Wildlife Reserve Complex in Los Banos. The elk were captured using net guns deployed from helicopters, then loaded up in livestock trailers and taken to three locations where they were released to join existing herds. Six bulls and six cows were released at the Carrizo Plains Ecological Reserve in southeastern San Luis Obispo County, said Joe Hobbs, CDFW senior wildlife specialist.

Hobbs said these efforts have come a long way; there were only 500 elk among three different herds when these particular relocation efforts began in 1975. Today, there are 4,300 in 22 herds.

But the process hasn’t been simple; reintroducing elk into the human landscape that once displaced them can be tricky.

“They were slowly increased and did what elk do, and there were complaints about damage,” Hobbs said. In particular, bulls would take down fence posts during rutting season, and herds would sometimes wander onto an alfalfa or vegetable field to graze. These episodes, however, have been limited, and wildlife officials have been quick to repair damages.

All this was possible thanks to a rancher who pioneered the very environmental transformation that threatened the species’ survival.

The cattle baron Henry Miller, who ran cattle and farmed on vast swaths of land throughout the San Joaquin Valley—a sub area of the Central Valley—was one of the biggest landowners of his day. In the 1870s, at a time when the elk where thought to be extinct, Miller came across a small group feeding in a marshland that work crews were planning to drain. Miller ordered their protection and began moving them to makeshift preserve areas. At the time, cowboys would chase them down on horseback and rope them with lassos, Hobbs said. The process yielded mixed results, leading at times to more deaths than relocations, and no shortage of farm intrusions, but it was the beginning of concentrated efforts to ensure the elk’s survival.

The methods of capturing the elk, and scientific knowledge of them, have come a long way since then. Now, recovery efforts have intersected with a larger project of wildland conservation throughout the San Joaquin Valley, where conservationists are working to piece together publicly and privately owned lands and employ management techniques hospitable to native species. The elk are just one of many members of the community that these efforts seek to protect. Because they can roam across such a large area, contiguous tracts of land help the elk thrive. In the meantime, these relocation efforts, known as translocation, are necessary to expand the herd’s genetic diversity, allowing for better reproductive success rates, said Dan York, associate director of the Wildlands Conservancy, which manages the Wind Wolves Preserve in Kern County, one of sites for tule elk relocation.

In the future, tule elk repopulation and relocation may be buoyed by the ongoing conservation efforts. York says so far, the efforts have made a difference.

“It so happened that this fairly significant lands conservation approach was what helped their recovery,” York said.