Paul Teixeira was welcomed into San Luis Obispo County government with a political spanking of such magnitude it’s still remembered as one of the bigger gaffs by a freshman supervisor.

In March, when the supervisor had just been elected to represent SLO County’s southeastern district, he tried to remold the South County Advisory Council, a move that drew so much backlash throughout the county—with a massive letter-writing campaign and about 80 people prepared to speak before the Board of Supervisors—that he withdrew his proposal the day it was supposed to go to a vote. 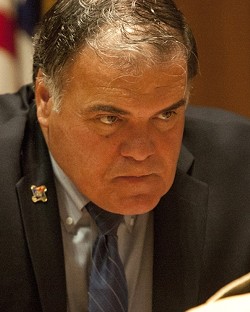 When he killed the item and said he’d go back to the community to work out a solution, a lot of people might have thought the issue was over. But a lot of people were wrong.

Teixeira has yet to meet with the advisory council and has since cut off the body’s main source of funding without an explanation to the group.

“It’s very upsetting to me, because in the past we have always received funding,” South County Advisory Council Chair Dan Woodson said.

There are 11 officially recognized community advisory councils in SLO County: ragtag groups of elected and appointed volunteers who review major land-use decisions in their respective communities. Since 1996, when the councils were officially recognized by a county resolution, the groups have operated on minute budgets drawn from the discretionary fund of each county supervisor. According to a handbook drafted by the county Department of Planning and Building, “each community advisory council receives funds from the Board of Supervisors to help pay for administrative costs.”

Supervisors don’t have to award that funding, it’s just that they always do—or at least, they always have.

“We assume it’s a matter of starve the beast,” said Istar Holiday, the council’s secretary. “If we have no money to function, then we’ll just disappear.”

Advisory councils typically put in a request every year or so for funding to cover such administrative costs as maintaining a website, postage, and printing and copying. So far this fiscal year, every advisory council that has requested money has received funds from its respective supervisor: North Coast received $650, Los Osos got $2,192, and Creston was handed $1,000, for example.

“I don’t have any reason to believe that if we were to ask, we would not get some reasonable amount,” said Kate Twisselman of the Shandon Advisory Council.

The one request that got shot down, however, came from the one advisory group that publicly bashed its supervisor.

To make things worse, Teixeira hasn’t officially told the group he’s not giving them any funding.

After one verbal request, the council sent a letter to Teixeira asking for funds—they asked for $1,200, which is down from $2,000 in previous requests—to cover administrative costs. With no response, they sent another letter on Sept. 27.

“We therefore are again requesting the grant, so we can repay the individual council members who have used their own funds to fulfill our printing needs and continue to function [on] behalf of both your office and the community we serve,” the council members wrote.

They still haven’t heard back. Actually, Teixeira has been relatively quiet as a county supervisor. He didn’t make a motion on any agenda item that came before the Board of Supervisors between May 24 and Oct. 25, and since his term began, he’s been the motion-maker on just 11 items.

Even if he hasn’t told the advisory council, Teixeira told New Times he’s not going to fund any advisory groups.

“We’ve got a number of problems that I feel are more severe,” he said.

His legislative assistant, Debbie Geaslen, added, “We can feed people, we can clothe people, or we can give money for toner cartridges and paper.”

So far this fiscal year, Teixeira has spent $12,461 from his community funds, including on big-ticket items, like $2,000 on the Arroyo Grande Valley Harvest Festival (he rode on a float in the parade) and $2,000 to the Nipomo Chamber of Commerce and the annual Oktoberfest celebration; and such smaller donations as $200 to the Girl Scouts of the Central Coast, $200 to the Community Action Partnership of San Luis Obispo County, and $500 to the Children’s Resource Center of the Central Coast.

The Oceano Advisory Committee is the only other group in Teixeira’s district, but it hasn’t requested funds for this year.

Without funding from Teixeira, the South County Advisory Council could be in trouble; council members have been using their own money to pay for copies and worry about maintaining their website in the long run.

It’s not the first time the group has been in danger of dissolving. Teixeira’s idea back in March was to “restructure” advisory councils within his district. In other words, he would replace the existing councils with a new council to cover the entire district and hand select the first pool of members.

It seems no secret to the advisory council members that Teixeira doesn’t agree with some of their decisions. And few people—Teixeira’s office included—probably anticipated the backlash that came after he tried to restructure the councils in his district. The county was slammed with letters of protest from Teixeira’s district, as well as from the other advisory councils in the county.

“They felt it was an attack on their autonomy,” SCAC chair Woodson said.

Teixeira said his idea to create a new council is still on the table, and he might make another attempt next year. But he’s still keeping the potential membership a secret.

Council members who spoke with New Times said they felt Teixeira wasn’t happy with their approach to land-use in the district. After one attempt to dissolve their group, and now the loss of funding, they seem to have gotten the hint that they’re not wanted. Council members said Teixeira doesn’t come to their meetings despite their invitations.

But Teixeira said the “brass facts” are that SCAC members went out and spent money they didn’t have, “and now they want me to come and bail them out.”