For many people, the relationship between a person and their hair stylist is an intimate one, especially when body image and a sharp pair of scissors are involved.

Leila Vea Lewis knows a thing or two about this. Two years ago, Lewis moved from New York City to Nipomo. And in March, she opened the LVL Salon. 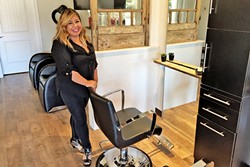 She worked for years in the fast-paced and ultra-chic hair fashion industry of New York. There, she studied and apprenticed under the auspices of late hairstylist and businessman Vidal Sassoon.

Lewis’ story starts in her hometown of Santa Maria. After high school, she left for San Francisco. And at 19 years old, she moved to New York, where she waited tables and did freelance work in cosmetics. She enrolled in the Aveda Institute, where she studied for nine months. She lived just south of Halston Street in Manhattan. Even after graduating, Lewis still waited tables.

The course of her life changed after watching a Sassoon demonstration, which prompted her to apply to the Sassoon Academy.

It was a tough school to get into, according to Lewis, but she got in as an apprentice after months of persistence. Things weren’t exactly smooth sailing from there. Lewis described it as extremely demanding work and a constant hustle for clientele—despite the recognition and street visibility she had with a name such as Sassoon’s.

At the academy, she learned the delicate skill of using scissors for cutting hair—no clippers.

“They’re not there to build your ego, that’s for sure,” Lewis told New Times. “You need the most difficult clients in your chair, so you can handle anybody.”

The job came with its ups and downs, and a few hiccups, but her work began paying off. She befriended the personal assistant for Yoko Ono—the widow of John Lennon from The Beatles—and became the widow’s hairstylist. Ono was a regular client, and Lewis came to her apartment at The Dakota every three weeks for five years. According to Lewis, one of Ono’s favorite haircuts is the pixie cut.

Another experience that changed Lewis’ life was Sept. 11, 2001. She was living and working in Manhattan at the time, waiting tables in the East Village at Yaffa Café. She remembers arriving to work just as the plane hit the second tower at the World Trade Center and the plume of dust spreading throughout the streets of the city after the towers came down.

It was a surreal experience for Lewis. The restaurant stayed open the entire night, and she continued waiting tables as people covered in dust straggled into the restaurant—not just for the food, but for the free-flowing drinks at the bar where many found temporary solace from the trauma experienced that day, according to Lewis.

“Everybody was freaking out,” Lewis said, as she described the scene going from chaotic to eerily quiet. “People looked like zombies.”

Lewis eventually returned to her roots in the Santa Maria Valley in August 2014 to raise a family with her husband and two children. She misses New York, especially the food and the diversity, but doesn’t miss the crowds or the subway system.

Her salon is located at 229 W. Tefft St. in the back corner of the Visitor’s Center building in Nipomo. She’s open Tuesday through Friday, 10 a.m. to 5 p.m. and on Saturdays by appointment only. She does full service hair care for women, as well as men, at her salon. Lewis was by herself for the first three months, but now has one full-time stylist and two part-timers. She only hires the best.

“Now that I started this, I want to have stylists with advanced education,” she said. “I want to be the best, the best that I can be.”

The Community Foundation of San Luis Obispo County is working with Paso Robles-based software company IQMS to support local students pursuing degrees in STEM fields. The two college scholarships for 2017 are valued at $40,000. For more information on the scholarships, visit cfsloco.org.