Cutting-edge currency: A few Central Coast businesses are offering customers the chance to pay with the crypto currency Bitcoin, an entirely digital form of money

Every day, all over the world, people engage in transactions, large and small. Whether they’re buying a sandwich or a house, most of these transactions involve money. Essentially a bartering tool, money allows populations to easily engage in exchanges of goods and services with official and recognizable paper or coins.

Business conducted across countries’ borders has long necessitated an international banking system, means of exchange, and international taxation—until now. With the advent of such crypto currencies as Bitcoin, Litecoin, and Peercoin, transactions are happening across cyberspace in the blink of an eye, and banks aren’t involved.

“We’re in a paradigm shift right now, a lot of people don’t realize that,” said Benjamin Vigil, owner of Apple Tree Dress, a clothing store in Santa Maria’s Town Center East. “We went from the industrial age to the information age; it actually happened about 15 years ago. That’s when it started.”

Vigil has just begun accepting Bitcoin at his clothing store. Of all the crypto currencies in the market today, Bitcoin is the most popular, being the first crypto currency, invented in 2009. Accepting a currency other than dollars wasn’t a huge leap for Vigil, who also owns a trading company and will often buy gold or silver coins from customers, who in turn use their new U.S. currency to purchase clothing from Apple Tree.

“Going to a crypto currency was a very easy transition for us because there is obviously a value to it; you can check it every day,” Vigil said. “It’s actually much easier to translate than someone bringing in a diamond ring, where I have to bring someone in and assess what the value is, and hopefully I don’t get burned.”

Bitcoin has drawn the attention of only a few businesses on the Central Coast. Though the digital currency was invented to easily move money in e-commerce, locals in the service industry have also started accepting the new form of money. Le Ciel Crepe Café in San Luis Obispo has been accepting Bitcoin for several months now, allowing it for transactions as small as a single crepe and coffee’s worth.

“It seemed like an interesting thing to do,” said Le Ciel owner Barry Fenton. “It seemed like no one else around was doing it, so we thought it would be fun for the people in town who use Bitcoin to start accepting it.”

Fenton was originally turned on to the idea by one of his employees, Isaac Minarik, also a Cal Poly student. Minarik invests his own money in Bitcoin and helped Fenton get his business set up with the necessary information and technology to accept it.

“If you’re selling things online, it’s just an objectively better payment method,” Minarik said. “But in person like we do here, it’s kind of clunky, but it’s fun.”

At businesses like Apple Tree Dress and Le Ciel, Bitcoin users can pay for the goods they want with virtual wallets on laptops or smart phones. The transaction can literally take seconds without any hard currency changing hands. It’s just 1s and 0s zipping through cyberspace. 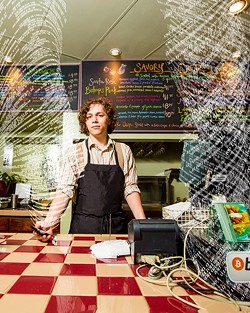 Bitcoin began in 2009 when its secretive creator—known as Satoshi Nakamoto, which may or may not be a pseudonym—wrote the encryption programming that makes the currency possible. The mysterious developer published the open source software that allows each unit of the currency to be traced back through the computer code to its origin. Bitcoin relies on a public ledger, which allows each piece of the currency to be accounted for by everyone on the network. Bitcoin users access their coins through a Bitcoin wallet, Minarik explained.

“When you have a Bitcoin wallet, what your wallet really is is a private key that proves to the rest of the network that you have the right to this digit on the public ledger and that you can control this part of the public ledger,” he explained. “Your wallet isn’t really your Bitcoins; it’s your key to access the Bitcoins.”

Businesses like Vigil’s Apple Tree Dress and Fenton’s Le Ciel need to set up a wallet, just like Minarik has as an individual. There are many companies and services that offer wallets, which prove possession of Bitcoin and thus allow users to move the currency.

“If you buy something with a credit card and that information gets stolen, they can drain as much money as you have on the line of credit,” Minarik said. “With Bitcoin, it’s a push system instead of a pull system, so if I give you $5 in Bitcoin over the Internet, that’s all you get; there’s no way you can use any information that I gave you to take more than that.”

It’s the ability to move the digital currency without the need for processing fees, banks, or exchange rates that’s made Bitcoin so popular. The U.S. Treasury and the IRS actually declared Bitcoin a “property,” which cast the concept into doubt for some. Vigil didn’t even think about accepting the currency until customers started asking if he accepted it.

“For me to sit here and tell you what I think, it’s not so much of that, it’s not a philosophical thing,” he said. “It’s just being able to serve my clients the best way I know how.

“But, if I have to pull the plug on Bitcoin at some point,” he continued, “that’s fine. It’s not going to hurt me all that much.”

The currency’s ability to move easily has helped it gain traction outside of e-commerce, with local businesses serving as the first examples in the area. As any business owner can attest, credit card processing is a convenience that customers appreciate, but one that also impacts the bottom line, as that processing costs the company.

“If we had a greater volume of people in here using Bitcoin, that would save us a substantial amount of money,” Minarik said of Le Ciel Crepe Café, “but you can’t really have people using Bitcoin until you have places accepting it, and it doesn’t cost us anything to accept it, so why not?” 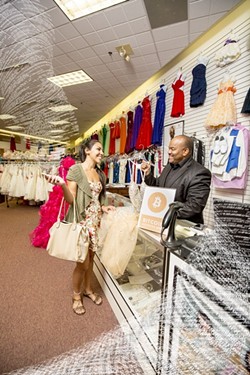 Crypto currencies like Bitcoin have value all over the world and can be exchanged into almost any local currency, either through online exchanges or individuals looking to invest. But many people ask: How is the value of a digital currency determined?

“It’s the same thing as the dollar now: It’s just paper. It’s not really backed by any material, tangible thing,” Vigil said. “I always look at trends, and I think crypto currencies are something that will be around a while, especially when places like eBay and Paypal are noticing Bitcoin and starting to think about bringing that in as a means of exchange. I want to be on that cutting edge; I want to be there as that happens.”

The more people and businesses that decide to accept and use Bitcoin as a means of exchange, the more confidence there is in the currency, and the more worth it collectively accrues. Critics of Bitcoin cite the currency’s ability to rapidly fluctuate as a downside.

At the end of November of 2013, Bitcoin had reached its highest worth at more than $1,100 per Bitcoin. This was during a booming time when more people were buying in, with much of the new market coming from Chinese companies and investors. Just one month later, in December, the Chinese government announced it was banning the use of Bitcoin by merchants. The going rate plummeted as a result, dropping from to just more than $500 in two weeks, impacting users’ wallets across the globe.

“It’s been sporadic lately,” Fenton said about Bitcoin use at his café. “When Bitcoin was selling much higher and it had more value, I think we were seeing a little more of it, but since it has come down, I think people are just holding on to it, hoping it will go up.”

Many critics have pointed to this Bitcoin crash as an example of why the new currency can’t be trusted. For supporters, however, it’s the right time to buy in while the price is low. Between June 10 and June 14, the price dropped nearly $70 per Bitcoin—from $634 to $566—only to rise to $607 per Bitcoin by June 18.

“Just with the low liquidity that we see now, there’s going to be high volatility,” Minarik said. “But what we’ve seen in the past is every time the liquidity increases and more people get into Bitcoin, the volatility decreases. The volatility is actually at an all-time low right now.”

The increasing number of people investing in and using Bitcoin has been influential, but there are still skeptics and people ignorant about how the currency functions. Some people think Bitcoin has sinister ties due to its use on Internet black markets that sell drugs, pornography, or weapons.

“It’s just ignorance. They don’t really know what it is,” Vigil said. “They hear something like on the news about ‘Bitcoin is bad’ or ‘drug dealers use Bitcoin,’ but you know what’s funny about that is, back in my day, before cell phones, we had pagers, and back then pagers had that stigma too: that only drug dealers use pagers. Then, after a while, everybody used pagers.”

It’s often been claimed that Bitcoin is untraceable, which isn’t true due to the nature of the currency’s public ledger. Measures can be taken to make tracing certain Bitcoins or wallets difficult, but determined and skilled programmers who understand the system can track just about any transaction.

“I think it’s that surveillance, as it exists now, is a very asymmetrical thing,” Minarik said. “There has been a democratization of surveillance with Bitcoin.”

Though the technology is new and still working its way into the collective understanding, it’s gaining popularity and traction as an investment opportunity, Vigil explained.

The fact that Bitcoin may fluctuate up or down on any given day may seem too risky for some investors, but the benefits of the crypto currency outweigh the risks for investors like Minarik.

A leisurely perusal through local craigslist.org listings shows that more than just local businesses are engaging in Bitcoin. A local college student trying to sell a car announced that both Bitcoin and Litecoin were acceptable means of payment. A Ventura-based individual will meet others in bank lobbies or local Starbucks and pay cash for Bitcoin, just like previous generations have with gold and silver coins.

“As far as Bitcoin goes, I can’t say I’m actively for or against,” Vigil said. “But at the same time, I don’t think crypto currencies are going to go away. I’m really more of a ‘go with the flow’ kind of guy as far as business, and it’s just a service we want to provide.”