More than a million people have watched her dance to songs like Megan Trainor’s Lips are Moving and Beyonce’s Partition. She receives rave reviews of her performances and requests for more from fans on the regular.

Yet, Alexandra Lund of Arroyo Grande is just a normal kid going to Paulding Middle School. A normal kid who has more than a million views on her YouTube channel. Alexandra, who goes by Sparkles online, started putting more effort into her YouTube page about a year ago, thinking of it as just another part of her dance portfolio. 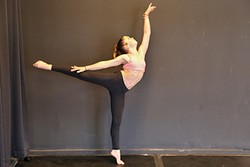 “I saw that a lot of people who have been doing better in the dance industry have been building all of their social media accounts,” Sparkles said.

At an age where most kids are just stoked to finally be in the teens age range, Sparkles, 13, has been dancing for nine years, but started seriously pursuing it as a career five years ago. She’s danced competitively and appeared on shows like The Voice, Dancing with the Stars, and The Millers. Sparkles dreams of auditioning for Julliard and dancing for Beyonce. Her dad, Victor, shoots the films in her home studio, and she recently started learning how to edit.

“I didn’t ever think I’d get to the point that I’m at now,” Spakles said. “I came out with a video a week or two ago and it already has like 16,000 views. It feels amazing. When you’re dancing on stage, you can reach an audience, but when you have that YouTube channel, it’s just so cool to me that I can reach all these people from all around the world that I’ve never met before through dancing.”

And the world can come to you, which isn’t always a good thing. Sparkles, who is also big on Instagram with 13,000 followers, concedes that the YouTube comments section isn’t always the kindest place. Some people write they can see her underwear during an impressively high kick (they’re just shorts, guys), others say that the choreography is too provocative or inappropriate for someone her age, and then there are the trolls who say she can’t really dance. 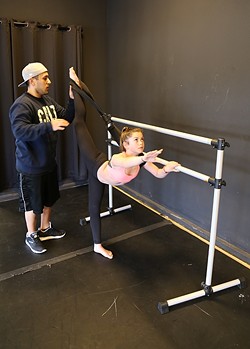 “I don’t really let it get to me,” she said. “I just brush it off because I don’t know them. If it was one of my friends, I might feel offended by it. But if it’s just some random person on the Internet that has nothing else to do, it doesn’t really affect me.”

Sparkles, who dances in all styles ranging from ballet to hip-hop to contemporary, works with a variety of choreographers, including Marco Cruz, who grew up dancing in studios in San Luis Obispo County. He did the choreography for Ring the Alarm, which features Sparkles moving flawlessly through a fast paced hip-hop routine at a dance competition.

“The kids that want to make this a career need a YouTube page,” Cruz said. “Nowadays your YouTube is your resume basically. It’s a way for other companies to see that you can advertise for them.”

Recently Sparkles wore a piece of clothing made by Capezio, a popular dancewear company, in one of her videos. The company took note and sent her a whole box of dance swag with the caveat that she promote the clothes in her future videos. Sparkles said it’s not uncommon at auditions for dancers to be asked things like how many followers they have on Instagram.

While Sparkles has created distance between herself and the cyber world, Cruz said he works with other dancers in her age range who have a harder time.

“You get those kids that hold everything that someone says in the cyber world so dear to their heart,” Cruz said. “You have kids that say they don’t want to post anymore because they feel attacked all the time. But it just kind of goes with the territory now.”

Ryah Cooley is a fan of any videos involving puppies on YouTube at rcooley@newtimesslo.com.