Cyrano is a faithful adaptation with song

Joe Wright directs the oft-told tale of Cyrano de Bergerac, a real-life 17th century French novelist, playwright, poet, and swordsman whose life was factionalized in Edmond Rostand's famous 1897 play. Wright adheres to Rostand's original, with an adapted screenplay and original songs by Erica Schmidt from her 2018 stage musical. If you happen to have never seen any of the two dozen or so film versions, the story goes like this: Cyrano (Peter Dinklage, substituting his short stature for Cyrano's original "flaw" of a massive nose), loves his longtime friend, Roxanne (Haley Bennett), but believes himself unworthy of her. She, on the other hand, falls for the handsome but inarticulate soldier, Christian (Kelvin Harrison Jr.). Because Cyrano wants Roxanne to be happy, he helps the romantically inept Christian win her with beautifully written love letters. Naturally, things do not go smoothly. (123 min.) 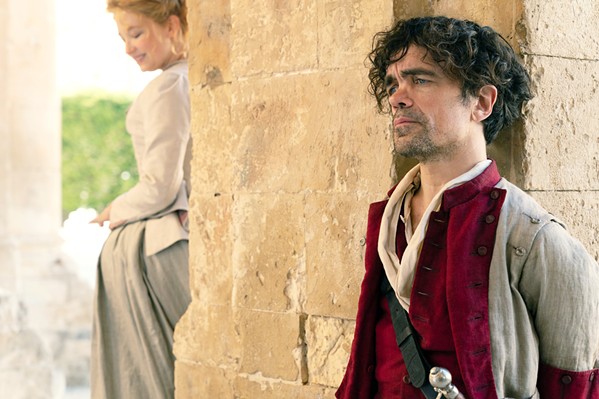 Glen Cyrano and Roxanne's story has been fodder for a lot of movies that have taken great liberties with Rostand's original play, but I like that director Wright and screenwriter Schmidt have decided to deliver the tragicomic tale as it was originally intended: a heartbreaking story of unrequited love about a fearless, brilliant man whose physical characteristic renders him insecure, keeping him from a relationship he deserves. Dinklage is excellent as Cyrano, a man who's heard and endured every insult but who's able to compose on the spot a witty verse while engaging in a duel and dispatching a man. Dinklage has an amazingly expressive face and a soulful tenor singing voice. Most viewers know him from Game of Thrones, but he's had terrific lead roles in films such as The Station Agent (2003) and My Dinner with Hervé (2018). Here he's riveting, and he and Bennett have terrific chemistry. For her part, Bennett's Roxanne is luminous, and Bennett's singing voice is absolutely lovely. The songs are very understated but at times heartbreaking, for instance when soldiers sing "Wherever I Fall" as they hand over their last war letters before charging into battle.

Anna I like that Wright didn't try to turn this story on its head too much. I think a lot of filmmakers would feel like the retelling needs to be something different—but let's face it, it's a classic story for a reason. I love Dinklage. He's a studied and skilled performer who breathes a whole lot of life into his characters. Cyrano is a tortured soul; his wit has served him well in many ways, but he feels he will never be the man that Roxanne desires. You must suspend some disbelief that Cyrano and Roxanne were childhood friends. Dinklage is almost 20 years Bennett's senior and the two do not look like peers age-wise for that reason. However, the two actors work so well together and are such a wonderful duo that I don't mind it. The music is lovely and tenderhearted, sung well by all. I haven't seen the stage show, but Schmidt's score and lyrics are beautiful. It may be an old tale, but this rendition gives it a new face.

Glen Every story needs an antagonist, in this case it's "nobleman" De Guiche (a menacing Ben Mendelsohn), who wants Roxanne as his bride, or at least in his bed. She's perfectly happy to accompany the rich but gauche aristocrat to the theater with her attendant, Marie (Monica Dolan) for propriety's sake, but Roxanne loves poetry and romance, and De Guiche is crass. Even though Christian is a dullard and undeserving of Roxanne, he's at least earnest and respectful, and though we're cheering for Cyrano to get his due, Christian is certainly a better match than De Guiche. Wright's two-hour film can't contain all that Rostand's five-act play laid out, and some elements have been changed, but the story's soul remains: tragically unrequited love with the second most famous balcony scene in theater since you-know-who.

Anna De Guiche is so easy to hate here, and Mendelsohn delivers quite a performance as the sleazy character. The film is pretty evenly scored between audiences and critics on Rotten Tomatoes, and overall, this musical is accessible and entertaining. I also really enjoyed Dolan as Marie, who chides Roxanne like a younger sister but begrudgingly stands by her side always. Full of wonderful banter, especially between Cyrano and Roxanne, this script is witty as well as emotional. This film is certainly worth the price of admission. Δ