D.A. 2015? The county's next top prosecutor won't take over for a year, but Dan Dow already has more than half the office behind him 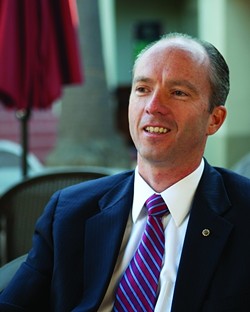 When San Luis Obispo County District Attorney Gerry Shea—who’s been head of the office for more than 15 years, the only D.A. to last that long in the last half century—announced he won’t seek re-election in 2014, it caught many people familiar with the office off guard.

The same day, Dan Dow, a deputy D.A. with the office for about six years, threw his hat in the ring for the June 2014 primary election—launching his website, which listed some 175 endorsements.

When Shea spoke to New Times about his decision, he said he initially planned to run for a fifth term, but “family matters” caused him to rethink that.

According to the numerous sources in and out of the D.A.’s Office and county courthouse who discussed what they know with New Times on condition of anonymity, Shea was “blindsided” when he learned of Dow’s effort to gather endorsements. Shea has run unopposed for the office since his inaugural term.

Dow told New Times he’s been giving a run “serious contemplation” since late summer. As of press time, he’d gathered endorsements from more than half of the office—too many to list here—but a few of the names that have appeared in the pages of New Times in the past include now-retired former assistant D.A. Dan Hilford and current deputy district attorneys Dave Pomeroy, Eric Dobroth, Kelly Mandarino, Dave Paxton, Lee Cunningham, Craig Van Rooyen, and Karen Gray. Some 65 law enforcement officers from the county’s various agencies have also signed on, as have such community leaders as County Supervisor Frank Mecham and Atascadero Mayor Tom O’Malley.

A major influence on Dow’s career has been his service in the Army, in which he enlisted as a private in 1989. He worked his way toward military intelligence, first as a linguist speaking Korean. By 1997, he’d completed his obligation with the Army and worked as a government contracts administrator and was pursuing his law degree. He continued his service with the California Army National Guard beginning in June 2001, where he rose to the rank of major, command judge advocate. He was deployed to Iraq and Kosovo, where he also served in intelligence, and later as a trial counselor and legal adviser to a logistics brigade commander. In Kosovo, he said, one assignment was tracking weapons smugglers as part of the peacekeeping effort following the Serbian-Albanian conflict of the mid-’90s. Part of his job, Dow said, was to keep an eye out for alleged war criminals still at large.

“There are intense situations where there’s lots of tension, where you have to weigh the benefits and costs to make good sound decisions,” Dow said about his deployments. “These are the experiences you don’t just get anywhere.”

According to different defense attorneys contacted for their off-the-record assessment of Dow, the overwhelming sense is that he’s tenacious; depending on who’s talking, he’s anywhere from reasonable to reluctant to budge once he’s made up his mind or been issued his marching orders.

“Yes, I’m tough. But in my experience dealing with child molesters, perpetrators of domestic violence … often you have to be very tough,” Dow said in response.

A veteran himself, Dow was one of the instrumental figures in the local creation of a Veterans Treatment Court, which, much like Proposition 36 Drug Court, offers alternatives to incarceration for non-violent offenders who suffer problems resulting from their military service.

“Vets court is a good example of when you are talking about extenuating circumstances,” he said. “You’re looking to identify people that can respond to the different programs. Just throwing some of these people in jail is not the answer.”

According to numerous sources, Dow and the county’s Department of Veterans Services faced more than a little resistance from higher-ups in the D.A.’s Office before the program was initiated.

The office currently employs three part-time investigators to deal with computer forensics and the like, but Dow said he’s interested in exploring the development of a technology task force to specialize in Internet crimes, such as ID theft, fraud, and child pornography.

“If we’re not doing things in the Information Age, then we’re in the Dark Ages,” he said.

Asked about what direction he’d take the office, Dow recalled his two years with the Riverside County D.A.’s Office, which he described as “very conservative,” where prosecutors were given very little independent discretion from the top.

“There was a lot more restriction. It was not good for justice and not good for morale. There was a lot of blowback,” he said. “I don’t want to see this office turn into one where we’re not all being very thoughtful.”Despite making himself available in rare circumstances, Shea was never viewed in local media circles as very receptive to requests for comment. Despite the current designation of spokesperson duties to Chief Deputy D.A. Jerret Gran, Dow claimed he’d be willing to personally talk to media on a regular basis.

“I want the public to know what we do. It’s about promoting our values of supporting victims while also holding wrongdoers accountable,” he said. “And so I intend to have an open-door policy.”

Asked the standard ‘Why now?’ question about his campaign, Dow said that now is “a good time for a transition.” He noted that the county has a lot of new chiefs in place at local police departments and “that’s a sign of the times.”

“It’s handing this part of the community off to the next generation,” he said.

Throughout Shea’s tenure, the office has been criticized for a number of criminal cases it’s pursued. The unsuccessful prosecution of local transplant surgeon Hootan Roozrokh brought the county into the national spotlight for its handling of the case and its refusal to comment to national news organizations, for example, as well as what was widely seen as the dragging of feet to file vehicular manslaughter charges against the son of the county’s then-tax collector.

Asked about how he would decide which cases to pursue in court, Dow said there’s no one-size-fits-all approach.

“We won’t be swayed by public opinion. That said, we have to be smart about how we use our dwindling resources in these tough economic times,” he said. “It’s about implementing the spirit of the law and not just rigidly applying the same standard to every single case that crosses our desks.

“I’m not ever going to make a political decision, and it won’t be top-down, my-way-or-the-highway,” he added. “There’s so much valuable experience in the office, we have to make sure it’s not one person working in a vacuum.”

Asked to comment on his boss’s performance over the last 15 years, Dow said Shea has done a good job hiring the right people and that he’s earned the respect of everyone in the office.

“Mr. Shea is a good man and he’s given a lot of his life to this office, but I think it’s time for a change in a different direction,” he said. “I want to bring in a fresher approach with more openness.”

As Dow spoke with New Times on the patio outside a local coffee shop, the interview temporarily took a back seat when a woman walking alone down the street suddenly tripped and fell to the ground. Before a reporter could turn and see what was happening, Dow and Deputy D.A Dobroth—who was sitting in for a cup of coffee—were out of their seats and down the street to the woman’s aid.

As this article was going to press, New Times learned that Assistant D.A. Tim Covello, Shea’s second-in-command, also filed papers to run for the office. In the interest of fairness, New Times will publish an interview with Covello in a future issue.

According to the county clerk’s office, the deadline to declare candidacy is March 7.