Da 5 Bloods is an epic exploration of race, colonialism, and brotherhood

Spike Lee (BlacKkKlansman, Malcolm X, Do the Right Thing) directs this story about four Vietnam Vets—Paul (Delroy Lindo). Otis (Clarke Peters), Eddie (Norm Lewis), and Melvin (Isiah Whitlock Jr.)—who travel back to Vietnam to repatriate the remains of their squad leader, "Stormin'" Norman (Chadwick Boseman), with whom they hid a case of CIA gold before Norman was killed in a firefight. Along for the ride is David (Jonathan Majors), Paul's only son. (154 min). 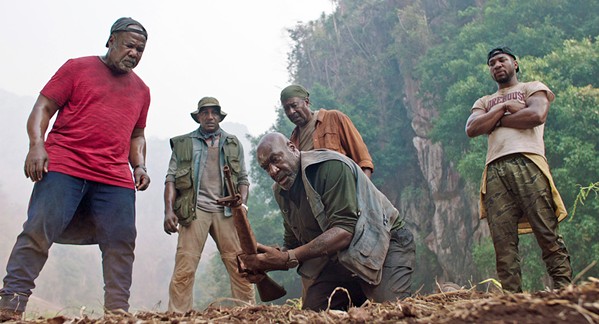 Glen This epic, ambitious film finds Lee covering a lot of ground—from slavery and systemic racism in America, to American colonization and the immorality of war, as well as the current Black Lives Matter protests and Donald Trump's divisive presidency—offering a history lesson wrapped in a crackling good war drama. The story moves back and forth from present to past, signaling the flashbacks via film stock and aspect ratio changes. Instead of confusing the audience with younger actors playing the four principal characters in the flashbacks, Lee makes the interesting choice of using the same middle-aged actors playing their decades-younger characters. Lee has never been one for subtlety, and here he paints in bold strokes and offers homage to some of Hollywood's great films, from Apocalypse Now to The Treasure of the Sierra Madre. He uses many of his signature techniques, from mixing in historical footage to double dolly shots to having actors—most notably Lindo's Paul—break the fourth wall and speak directly to viewers in a Shakespearian soliloquy. Even though it clocks in at 2 1/2 hours, the narrative never lags. This is another potent entry into Lee's ongoing artistic exploration of pervasive racism, and an excellent follow-up to BlacKkKlansman. Available for free with your Netflix subscription, if this shows up in theaters later, I'd pay to see it on the big screen—it's that cinematic. Prepare yourself, however: There's some grisly war violence.

Anna I would definitely see this in the theater given the chance. With the film being the length that it is, it's too easy to get distracted at home and press pause to go do this or that, and it's just too good for that kind of viewing. I thought using the same actors to play their younger counterparts was actually pretty clever, especially since the older versions were retracing their steps through the jungles of Vietnam. Along for the trek is David, Paul's son who is less than welcome by his father. Their relationship is complicated and strained, and Paul is not an easy man to deal with. He's battling PTSD and inner demons, and the journey through his past isn't helping to slay them. Lee has such a talent for weaving a huge narrative into both the big and little moments in a film, and Da 5 Bloods is another great show of his talent. You can't help but feel a part of their shared story.

Glen Paul is definitely the most fleshed-out and complicated character. He's inexplicably an avid Trump supporter, and Lee intimates that his misguided support for a president whose racism is on the surface has more to do with Paul's deep-seated anger and mental illness from his time in Vietnam, which seemed to scar him more than his compatriots. Yes, we find out why toward the end of the film. The heart of the film's message is that young black Americans, who at home were being repressed by the white power structure, were drafted and forced to go far from home to repress others. It's an irony that pervades the film right from the beginning, when Lee includes the Muhammad Ali interview in which he explained his refusal to be drafted: "My conscience won't let me go shoot my brother, or some darker people, or some poor hungry people in the mud for big powerful America. And shoot them for what? They never called me nigger, they never lynched me, they didn't put no dogs on me, they didn't rob me of my nationality, rape and kill my mother and father. Shoot them for what? How can I shoot them poor people? Just take me to jail." It's a powerful message.

Anna War doesn't end when the last bullet falls, that much is clear. All of these men have had to weave a life out of what they were left with after the war, some more successfully than others. What are they really there for? Is it just a lust for that gold they buried so long ago? It doesn't seem so. They're looking for something they lost in that same jungle—youth, innocence, their fallen brother buried there. It's all pretty heartbreaking, and watching Paul circle into mania is not easy. The Treasure of the Sierra Madre is reportedly Lee's favorite film, and his love for it is evident here along with nods to Apocalypse Now. He's an incredibly talented director. This film was originally written as four aging white vets revisiting Vietnam, and when Lee decided he liked the premise, he and his co-writer rewrote it into what we see on screen. I'm glad he got his hands on this script and made it into its final form. I'll totally be doing a re-watch of this one at some point. Δ