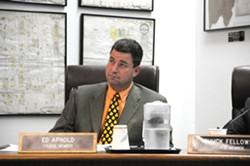 Arnold pleaded not guilty April 14 to possessing child pornography as well as using a minor for pornographic purposes, both felonies.

According to the motion filed with the court April 9, investigators allegedly found pictures of naked underage girls and a video showing a teenage girl showering on Arnold’s personal computer, which was seized by police during a Jan. 4 search of Arnold’s Pismo Beach home.

The video appears to have been filmed in the bathroom of Arnold’s Arroyo Grande home, said Chief of Police Steve Annibali. Acting on a tip, police contacted a Spanish woman who stayed at the home as a foreign exchange student during the summer of 2005; the woman confirmed she was the person in the video and that she was 16 years old at the time.

Annibali said the identities of the girls in the still photos haven’t been identified, but investigators did consult a San Luis Obispo-based pediatrician, who said they appear to be younger than 18.

The new heat on Arnold has apparently pushed his fellow council members beyond what they can take.

Arnold didn’t attend the April 13 council meeting, but in his absence Mayor Tony Ferrara announced they will consider sending a letter to Arnold suggesting he resign at the next meeting on April 27. If he doesn’t resign, Ferrara said, he will present to the council an outline of the process to recall Arnold.

“In light of these allegations, it is clear to me that Councilman Arnold is going to need to focus his attention on his personal issues and problems,” Ferrara said. “It is also evident that because of this he can no longer effectively serve the city of Arroyo Grande.

“These events have caused a severe drain on the city’s resources and have distracted our staff from conducting the day-to-day business. It must stop now,” Ferrara said.

Ilan Funke-Bilu, Arnold’s attorney, told New Times his client has no plans to step down as a councilman.

Arnold is already facing five felony charges, including burglary, assault with a deadly weapon, and possession of an assault weapon for his alleged role in a Dec. 15 attack on a woman who had lived with him and his wife. He plead not guilty to those charges in January. ∆