A former Paso Robles police sergeant accused of committing forcible sex acts against a woman while on duty will not face criminal charges, despite the discovery of DNA evidence related to the case.

SLO County District Attorney Dan Dow said his office concluded an investigation into the accusations against the former officer, Christopher McGuire, and determined that "no reasonable and objective jury" would find him guilty of the alleged crimes based on the evidence. 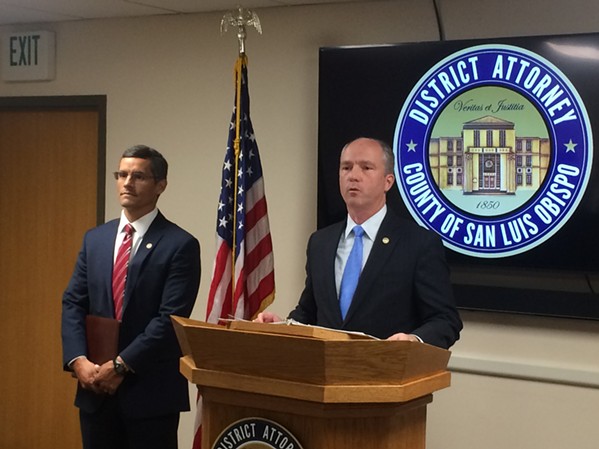 "Sexual assault cases are perhaps the most difficult cases and complex cases that we investigate and prosecute," Dow said at a Nov. 1 press conference. "The most difficult thing I had to do as a prosecutor is sit across from a victim and tell them that we don't have enough evidence to prosecute a case."

In June, the Paso Robles Police Department confirmed that McGuire was on paid administrative leave and under investigation for a 'serious criminal act.'" McGuire later resigned from the department.

SLO County Assistant District Attorney Eric Dobroth said the investigation began after a female victim accused McGuire of sexual misconduct while on duty. Dobroth also said that there were multiple instances of sexual contact between McGuire and the victim, and confirmed that some of that contact was consensual. Dow and Dobroth also confirmed that DNA evidence found at the scene of one of those contacts did match McGuire, and that the SLO County Sheriff's deputy who handled the initial investigation into the allegations recommended that the DA's office file forcible sex act charges against McGuire.

At the press conference, Dow said that while his office was unable to file any charges in the case, he was grateful for "other ways" the office was able to support victims, including its victim and witness assistance center.

"I don't want this decision to be received by anyone in our community, especially anyone who's been a victim of sexual abuse, to view this decision as evidence that they will not be supported by law enforcement," Dow said. "To the contrary, we encourage every survivor ... to come forward."