Update (Feb. 28, 12:30 p.m.): The SLO County DA's Office announced that it's identified the identity of the robocaller as Kern County resident Kevin P. Rice. In a Feb. 28 press release, DA Dan Dow said that Rice came forward as the caller, claiming he had no affiliation with the Hill or Korsgaden campaigns. The DA's Office is continuing to investigate the incident for possible violations of the California Political Reform Act.

"I am firmly committed to aggressively enforcing violations of election and campaign law to ensure that members of our community are able to cast their vote without interference of unlawful campaigning activity," Dow stated.

The DA's release says that "the evidence obtained during our investigation will be carefully reviewed to determine whether a crime has been committed."

Original story: The San Luis Obispo County District Attorney's Office says it's launching an investigation into a racist and homophobic robocall that was received by potentially thousands of SLO County residents on Feb. 25. 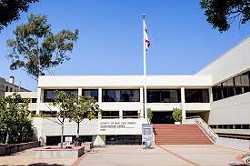 The robocall—featuring a woman's voice with an exaggerated Southern accent claiming to be a member of the Ku Klux Klan—asks the receiver to vote for Adam Hill for 3rd District county supervisor. It mocks Hill's March 3 election opponent, Stacy Korsgaden, for being gay and makes several vulgar, homophobic remarks.

Both Hill and Korsgaden have disavowed and condemned the robocall, with Hill calling it "an offense to anyone with a conscience."

"If you wonder how low some people will go to attack someone they don't agree with or like, you can stop wondering," Hill said in a Feb. 25 post to Facebook. "However, I will not breathe from their bubble of poison and will keep running our issues-based campaign to the end."

The offensive nature of the call supporting Hill has left many locals to conclude that it was created to benefit Korsgaden.

"I'm angry and embarrassed for SLO County. The message obviously was more mudslinging against Adam Hill," Grover Beach resident Susan Hughes said on Facebook. "I can only hope his opponent wasn't behind it."

In a Feb. 25 press release, Korsgaden said "my campaign and I had nothing to do with the call," and she condemned it as "hateful and meant to divide our community."

"This hateful call left few groups unscathed and has no place in political discourse or our modern society," Korsgaden said in her statement.

The DA's Office confirmed on Feb. 26 that it opened an investigation into the identity of the caller.

"I have asked my chief of investigations to open an investigation immediately this morning," DA Dan Dow said via email.

While landline robocalls can be legal, they must include accurate information about the sending party. The voice on the Feb. 25 call claimed to be "paid for by the Daughters of the Heroes' Cross—KKK," but that doesn't appear to be a legitimate group. The call included a callback number, which when redialed, plays the salacious message again.

The robocall hits at a high point of tensions between the Hill and Korsgaden campaigns. In the waning weeks of their race, Hill has been besieged with attack ads from Korsgaden criticizing his character and past behavior.

"Korsgaden got down in the mud and has stayed there and then feigns surprise that there are others in the mud on her side who will go even deeper into the muck than she," Hill said on Facebook. "Less than a week left of her sociopathic campaign."

In her Feb. 26 statement, Korsgaden defended her recent ads and called the robocall a "conveniently timed distraction."

"The fact is, Adam Hill's bullying, intimidating, and abusive behavior is all well documented in the media, and my campaign has made it a major issue in this race," Korsgaden said. Δ