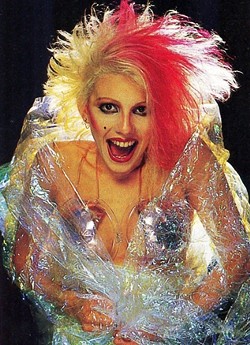 SLO Brew’s 25th anniversary is upon us, and the venerable downtown restaurant and nightclub plans to ramp up their show schedule in celebration. This week, for instance, they kick off on Thursday, July 18 with The Shine Brothers (doors at 8 p.m.; all ages; $8 presale or $10 at the door). “If The Everly Brothers were invited to The Birthday Party, The Shine Brothers—a liberal dose of melodic mayhem—would be the party favor,” according to the band’s bio. “Waving the ‘psych-my-delic’ banner, The Shine Brothers achieve an alchemic balance of sunshine pop song structures and howling devilish rhythms, crowned by dirty woven vocal harmonies.” Opening acts include local trio The Push Back as well as King Walrus & The Magicians, who’s created quite a buzz in the local rock scene.

On Friday, July 19, you can “Surrender Your Heart,” go “Walking in L.A.,” play “Mental Hopscotch,” or reach “Destination Unknown” when Dale Bozzio of Missing Persons takes the stage (doors at 7:30 p.m.; 21-and-older; $20 presale or $23 at the door). But Bozzio isn’t the only ’80s superstar to play this show. Opening acts include “I Want Candy” and “Do You Want to Hold Me” hit maker Bow Wow Wow, and Gene Loves Jezebel of “Desire” and “Jealous” fame. Three ’80s bands for twenty clams? Bust out the neon and leg warmers!

The first GLO Brew was so successful they’re doing GLO Brew 2 on Saturday, July 20 with DJ KoFu (10:30 p.m.; 21-and-older). There will be some live performances, body painting, and plenty of glow sticks. Get groovy.

On Tuesday, July 23, Lakes returns with The Honey Trees, Wesley Jensen, and Rosasharn (doors at 7 p.m.; all ages; $10 presale or $12 at the door). After the show, you can take the soaring rock sounds of front man Seth Roberts and Lakes with you since this is a release party for their new EP. 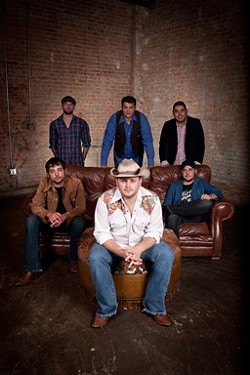 On Wednesday, July 24, country act The Josh Abbott Band will play (doors at 7:30 p.m.; 21-and-older; $20 presale or $23 at the door) with opening act Charlie Shafter. Abbott writes great narrative tunes that’ll have you tapping your Ariats and Durangos.

Some other SLO Brew shows to think about buying tickets for include the following: Son Volt on July 31, Cherie Currie of The Runaways on Aug. 18, and Adam Ant at the Fremont Theatre on Sept. 18. You can buy tickets online at ticketweb.com. Happy 25th Anniversary, SLO Brew!

It’s time again to head up into the heat of Paso Robles for the California Mid State Fair. You can get a lowdown on their entire schedule at midstatefair.com, but here are a few highlights for the main stage:

American Idol star Adam Lambert plays Friday, July 19 (7:30 p.m.; $25). Best known for being openly gay, his singles include “Whataya Want From Me,” “If I Had You,” and “Better Than I Know Myself.” Allison Iraheta opens.

On Saturday, July 20, check out Sail Rock, which includes performances by Christopher Cross, Orleans, Al Stewart, Firefall, and Player performing their hits such as “Sailing,” “Year of the Cat,” “Still the One,” “Baby Come Back,” “Just Remember I Love You,” “Dance with Me,” “Time Passages,” “You are the Woman,” and “Arthur’s Theme.”

A couple shows that are free with admission and wholly worth checking out are Keb’ Mo’ on Friday, July 19 on the Fort Frontier Stage at 8:30 p.m. This three-time Grammy Award-winner is an awesome blues-and-beyond performer. Then you can “C’mon Get Happy” with David Cassidy at 6:30 and 8:30 p.m. on the Fort Frontier Stage on Saturday, July 20. “Cherish,” “I Woke Up in Love this Morning,” “Breaking Up is Hard
to Do,” and the awesome “I Think I Love You” are a few of his hits.

Plus, you can have fun at the fair by reading the names of cowboys off the backs of their belts and then saying, “Hi Buck! Long time no see. How are you?” and pretending to know them. Good times! 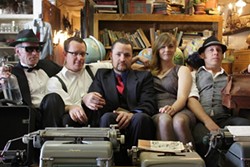 The Tipsy Gypsies will deliver on their promised new album Little Victories, which they successfully funded through a Kickstarter campaign, this Friday, July 19 at The Z Club (doors at 7:30 p.m.; Reese Galido opening at 8; Tipsy G’s at 9).

“It is more modern than our last disc, although there are still a few straight gypsy jazz songs on it,” explained guitarist and chief songwriter Forrestt Williams. “For the most part, I’m playing electric guitar through an old ’50s tube amp instead of acoustic, and the style has developed a bit. It’s almost like our last disc was very 1940s and this one is very 1950s. Little Victories maintains a gypsy edge the entire time but also draws from bluesy influences and early rock’n’roll.”

All true, indeed. What Williams and co-writer and singer Hilary Langdon are especially good at is creating scenes, stories, and characters. Langdon has a truly memorable voice—high, elastic, and with the sort of unique edge that made Billie Holiday so good. Williams is a gifted guitarist, and they’ve surrounded themselves with great players, including the fantastic fiddler Allan Dick, and the solid rhythm section of upright bassist Brian Lanzone and drummer Isaac Laing. 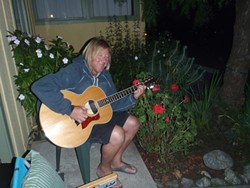 Fish Out of Water will bring their original rock, funk, and reggae music to the Concerts in the Plaza show at the SLO Mission this Friday, July 19 at 5:30 p.m. They’ve been known to perform in bathrobes, so come as you like.

Inga Swearingen has a voice to die for, and her regular collaborations with local guitar great Guy Budd are must-see events. The good news is you have two chances to see her with Budd and one chance to catch her on her own; the great news is all three shows are free. On Friday, July 19 at 5:30 p.m. Guy Budd & Inga Swearingen play the Paso Robles Concerts in the Park. Next Friday, July 26 at 5:30 p.m. she’ll appear on her own at the Claiborne & Churchill Winery’s Songs & Sips event. Seating is first come first serve, and you should bring a lawn chair or blanket to enjoy the festivities. Then on Friday, Aug. 2, at 5:30 p.m., she and Budd play the Concerts in the Plaza in front of the SLO Mission.

Good old Greg “Spanky” Baldwin sure is enjoying his renaissance. After touring the nation—50 gigs over 50 days from the West to the East Coast and back, to celebrate turning 50—he’s continued to play regularly in our area. “Well, I sure am havin’ a blast playin’ around here this summer, and this week is a good example why,” he writes. “Thursday, July 18 I’ll be playing at Pappy McGregor’s from 6-9 p.m.; Saturday, July 20 I’ll be at the Pour House/Paso Brewing Co. at 8:30 p.m.; and Sunday, July 21 I’ll be joined by Banjer Dan at Figueroa Mountain Brewing Co. (Buellton) at 2 p.m. for my third and last appearance of the season for their Lawn Series. I’ll be playin’ around town ’til the first of September and then I’m headin’ back for a repeat of the tour east ’til mid November. I’m hooked!” 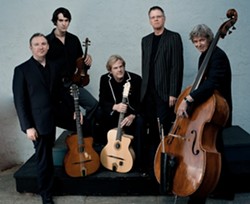 Founding member of the Desert Rose Band John Jorgenson and quintet play at Castoro Cellars Winery on Saturday, July 20 for a 7 p.m. SLOfolks concert (tickets are $22 at the venue and Boo Boo Records). Jorgenson was also a member of the Hellecasters and for six years played with Elton John, who called him a “brilliant guitarist, fucking brilliant.” His guitar work has been utilized by the likes of Barbra Streisand, Bonnie Raitt, and Earl Scruggs. He was also chosen to portray Django Reinhardt in the feature film Head in the Clouds. Sonnie Brown will interview him on her 2 p.m. show Song Town. For the concert, please bring low back chairs if you would like to sit in front. Dinner will be catered by Bon Temps Café.

I wish I could blame the jury for the wrongheaded Zimmerman decision in the Trayvon Martin killing, but the real problem is the stupid “stand your ground” law in Florida. It also doesn’t help that some communities allow racist reactionaries like Zimmerman to carry a concealed weapon. Maybe some of these problems will be discussed between songs on Saturday, July 20 during “Up in Arms: A Creative Response to Gun Violence,” a concert with Erin Inglish and Ranchers for Peace at the Steynberg Gallery (doors at 7:30 p.m.; all ages; $15). The gallery is displaying a collection of anti-gun-violence posters as part of the event. “We will be playing songs on the topics of guns, gun violence, peaceful solutions, and the fray between,” said Inglish. “A portion of the show’s proceeds will go towards non-profit education on gun safety. This is a one-time kind of show, so come on out if you can!”

Our own local surf and psychedelic rock hero Merrell Fankhauser is enjoying another career high with his new documentary Rainbow Bridge Revisited.

“The CD soundtrack is already getting play on about 40 radio stations,” said Merrell. “We are No. 1 on WFMU, a very important station in New York!”

The original Rainbow Bridge was a 1972 documentary about various singers, musicians, artists, astrologers, hippies, surfers, and others who attended a “New Age” gathering in Maui. The film also features footage of a Jimi Hendrix concert. The film itself was about a spiritual awakening and UFO sightings and other fringe concepts. It’s an odd film indeed.

Now 41 years later, Merrell has revisited the film to explore its message more fully. The one-hour DVD documentary also features a 12-song soundtrack with music by Fankhauser, The Space Patrol, and Omar and The Wavespies.

“As you know, I lived on Maui for 14 years and I moved there in ’73, just a year after the Jimi Hendrix Rainbow Bridge film came out,” said Merrell. “And when I moved there I met a lot of people that were in the movie, and a lot of them were hippies, surfers, and cosmic people that were seeing UFOs, and they said Jimi was really into the whole UFO thing, and that there were even some hovering about when they were shooting over there. So we contacted the ones that we still knew were on Maui and we went over and interviewed them and it was really interesting what some of them had to say about hanging out with Hendrix and everything, so we’ve got some really interesting interviews with an insight into some of the things that were going on with that movie with Hendrix that didn’t come out.”

Merrell condensed these interviews and segued into some great big wave surfing. You can hear more about the project on Wednesday, July 24, when Merrell appears on the Dave Congalton radio show on KVEC at 3 p.m.