Liz Aguilar has become comfortable talking about her husband and his visionary photography. 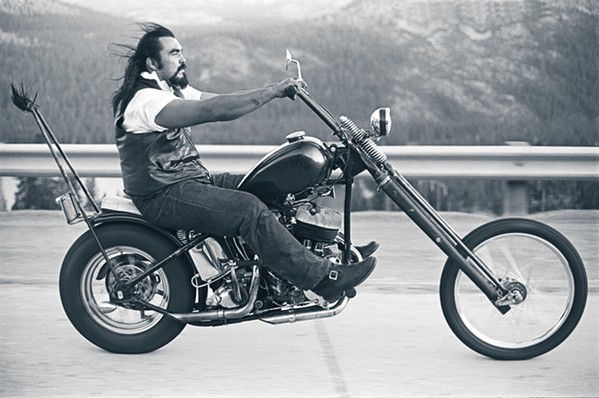 She has been married to photographer Dugan Aguilar for 44 years, a fact that still makes her smile proudly and laugh as she describes his long history of documenting Native cultures in California. It's something she has to do, since her husband, now fighting Alzheimer's, Parkinson's, and diabetes, isn't able to give many interviews anymore.

A Native American himself (Mountain Maidu/Pit River/Walker River Paiute), Dugan has documented Native American people and their lives in and around California for more than 40 years. A curated collection of his work called She Sang Me a Good Luck Song can be seen in a new traveling exhibit, featured at the DANA Adobe Cultural Center through July 15. The exhibit is based on a book of the same name by Dugan, published by Heydey Books.

"He did a lot of work for a publishing company in Berkley, Heydey books," Liz said. "The publisher really admired his work. As Dugan got a bit older and wasn't doing photography as much, the publisher wanted to do a book—a retrospective of his work, going back 40 years. So we got an editor and they went through lots of years of his work."

Liz said her husband's interest in photography started when he was beginning college, but he had trouble getting into the photography classes offered in junior college. Eventually he began working at the Desert Research Institute, which afforded him access to photography classes. But it wasn't until he and his wife's journey to Yosemite that he fully began to immerse himself in the art.

"He really got into it one summer when we went to the Ansel Adams workshop," Liz said. "He admired the other photographers so much and soon started taking a lot of photographs."

Dugan often said that he felt the California native population was not only underrepresented in pop culture and media, but often misrepresented. Liz said he wanted to show them as he knew them—vibrant, yet un-romanticized.

"He really felt that the California natives didn't have enough documentation and enough of a current voice," she said. "That's what he was interested in. ... He found that Native American culture in California was so rich."

Liz said that what her husband liked to take pictures of most were Native American faces. Dugan did do some landscape work, she said, but he thrived as a portrait artist.

"He just knew everybody," Liz said. "He was quiet. He gave people the option to be in his work. Even at an event, he would give people a sticky dot to put on their name tags if they did not want to be photographed. He felt that it was a gift from them to let him photograph them."

The photos in the exhibit show the unique intimacy Dugan enjoyed with his subjects. There is a dutiful patience in each shot that almost makes it look easy. But these are powerful moments that require long periods of study and self-restraint.

It's instantly obvious how passionate Dugan was about telling a better, more accurate story of California's diverse Native community. It's impossible to come away with anything other than a newfound understanding of how cultures intertwine with their changing social and physical landscapes.

The title of the exhibit, She Sang Me a Good Luck Song, was taken from an experience Dugan had while documenting an event. Dugan had asked an elder if he could take her picture.

"She said, 'First, let me sing you a good luck song,'" Liz said. "And she him a song in her native language for good luck in taking pictures. It was a blessing."

It's been three years since Dugan was able to hold a camera and take photographs, a fact his wife somberly shared. Parkinson's has made it impossible to hold a camera, and diabetes caused him to have vision troubles. Liz said it was difficult for the lifelong shutterbug to come to terms with that, but he still is focused on the message of his work.

"It was very hard," she said. "What Dugan always says is he wants people to know that Native Americans are alive and well right now and to see how they are living, and how beautiful they are and how vibrant they are. That's what is important to him now." Δ