Dance barefoot to Unfinished Business on May 29 at Sea Pines

Unfinished Business band leader Ed Miller spent years as an FBI agent, but what he always wanted to do was play rock 'n' roll. After seeing The Beatles on The Ed Sullivan Show as an 11-year-old, he begged his parents for an electric guitar and practiced, practiced, practiced.

He was in his first band by 14, and though he kept his hand in music, his law enforcement career eventually subsumed his music dreams. Then he retired from the FBI, started Unfinished Business in 2003, and they've been going strong ever since ... except for that pesky last 14 months or so. 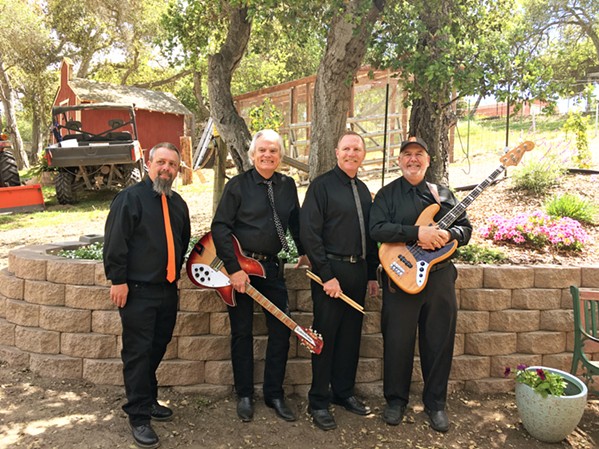 Now they're back at the next Barefoot Concerts on the Green at Sea Pines Golf Resort & Spa on Saturday, May 29 (2 p.m.; free). The show kicks off with a set by singer-songwriter Charlie Baker, followed at 3 p.m. by Unfinished Business, playing "the most memorable rock, pop, and soul hits of the 1960s, with an occasional iconic hit from the '50s, '70s, or '80s sprinkled in," according to Miller.

If you were hoping to see Jerry's Middle Finger at SLO Brew Rock on May 28, you're out of luck. It sold out quick! But you can catch Cali reggae, surf, and psychedelic rock act Sensi Trails on Saturday, May 29 (6:30 p.m.; free), on the beer garden stage.

"After releasing a five-song EP, lead singer and guitarist Kyle Rising decided to relocate from Outer Banks, North Carolina, to San Diego," according to press materials, where he gathered his new band. "Honoring the sounds that inspired them, while mixing in fresh themes and styles, Sensi Trails is finishing their debut album. With the chemistry of catchy songs and infectious vibes, they travel the open road, on a quest to play and spread their music to the world."

Later than night, Key appears with fiddler Sarah Blick and alt-pop singer-songwriter Katie Ferrara at Morro Bay's Libertine Pub (7 to 10 p.m.; free). Blick did a three-year tour with Chicago-based duo Sugar Still, and Ferrara has two indie albums out, and her music has appeared in the TV show Good Witch.

Finally, on Wednesday, June 2, Key will head to Puffers of Pismo with Bakersfield balladeer Tim Styles and LA-based touring artist Pi Jacobs swapping songs in the round (7 p.m.; free; 21-and-older).

Do it for the kids

The Paso Robles Youth Arts Center is hosting Backyard Jam, a benefit concert, on Wednesday, June 2 (5 to 8 p.m.; $75 tickets include two beers from The Backyard and one dish from Roots on the Railroad; call (805) 238-5825 or pryoutharts.org/backyard-jam).

Featuring performers from the Youth Arts Center—some current students and some alumni—all performing to raise money for the free visual and performing arts program, it's a great opportunity to give to an organization that gives so much to the Paso community.

"We are so excited to hear our band students perform live because this event is all about them! Seventeen current and alumni band members will play familiar favorites and some will even debut their own songs at the event," according to organizers.

Return of the Real Blues Jam

Next Thursday, June 3, the Real Blues Jam at the Pour House returns to the patio (6 to 9 p.m.), organized by intrepid award-winning singer-songwriter Ted Waterhouse.

"This is an event that has been sharing great blues and American roots music with audiences and musicians at a series of venues around SLO," Waterhouse explained. "Featuring bassist/vocalist Bruce Willard and drummer Dean Giles as the Real Blues Rhythm Section, the jam always draws a great lineup of blues-loving guest musicians and vocalists to join in the fun onstage—not to mention a loyal following of music fans and dancers from throughout the county and beyond."

Who knows who might show up to jam? Maybe you?

"All blues oriented musicians—guitarists, harp players, keyboardists, bassists, drummers, horn players, and vocalists, regardless of experience—are welcome and encouraged to sit in," Waterhouse added. "The only real requirement is a love for blues-based music."

I don't usually cover Santa Maria. I leave that to our sister paper the Santa Maria Sun. I also don't write about shows that have no published location, but you're smart and will figure out how to find All the Smoke happening in Santa Maria on Saturday, May 29 ($5 cover; 3 to 8 p.m.; 18-and-older; masks required; direct message organizers for the spot ... try Instagram).

Connect the Coast and its CEO Lorde Sanctus are doing the impossible—getting out hip-hop, R&B, and rap sounds and culture to the lily-white Central Coast. One artist under their umbrella is Cav, also known as DJ Brotha C, who helmed club-based dance parties and karaoke nights pre-pandemic. According to Lorde Sanctus, Cav spend the pandemic reinventing himself into an R&B singer and recording a three-song self-titled EP.

The EP's first single, "I Think I'm in Love," dropped May 7 on all major streaming platforms. Co-written by Lorde Sanctus and Cav, it's a punchy crunchy R&B track featuring emcee D BANKS. Check out connectthecoast.co to hear some of their other artists.

Now get to DMing and find the spot. Δ