Ten years ago, Arts Obispo began a tradition of opening the homes and studios of artists across the county. Each year the exhibition expands, and this October nearly 300 artists are opening their doors, proclaiming “mi casa es su casa,” and hoping to push some art. In grand Open Studios tradition, the event has been divided into two weekends: Oct. 11 and 12 for the North County (Atascadero, Cambria, Cayucos, Los Osos, Morro Bay,

Paso Robles, Santa Margarita, and Templeton) and Oct. 18 and 19 for the South County (Arroyo Grande, Grover Beach, Nipomo, Oceano, Pismo Beach, San Luis Obispo, and Shell Beach). Purchase of a $25 catalogue gains access to all of these weekends, in addition to a first-ever encore weekend, Oct. 25 to 26.

This year’s paintings, photographs, jewelry, and sculpture will be joined by another artistic genre altogether—performance art. Inspired by Long Beach’s Pageant of the Masters, Civic Ballet will be hosting a Living Art Dance Gallery at the SLO Children’s Museum during the second weekend of the tour.

Artistic Director Drew Silvaggio jokes that the ballet company may have muscled into an event traditionally intended to cater to the visual arts, but the siege doesn’t seem to have sullied the event. If anything, the dancers will add still another dimension to an event that already challenges perceptions of creative space.

Civic Ballet will be tossing a half-dozen images on the wall at the Children’s Museum, some of them photographs of dancers, others paintings to which the dancers will respond. Silvaggio has choreographed each of the individual works, but the true appeal of melding photography and dance is the organic relationship between the two, the image discernibly inspiring a phrase of movement.

“These aren’t going to be 20 minute ‘everybody sit down and watch this’ dances,” he explained. “They’re three to five minute pieces and, really, the focus is the painting and how it inspires dancers to move. It’s like when you say you’re going to do a ballet to Shel Silverstein’s poetry you say a poem and then you begin to see it in dance. There’s beauty and simplicity in having a dancer be part of a picture.”

In one of the images, a road emerges from a woodland, and though the intention for the dancer isn’t to become part of the tableaux—as she would in the actual Pageant of the Masters—she will interact with the scenery, perhaps departing, perhaps returning. But not all of the artwork runs along pedestrian, pastoral lines.

“Jeff Claassen’s style is just loud and frantic and pops, which may be an outline for the movement of how the dance will happen,” said Silvaggio. Three dancers, rigged out in heels and other assorted gallery-goin’ attire, will respond exuberantly to the painting. Rather than watching, silently and awkwardly, Silvaggio expects the audience to talk and react, with the intent that the dancers will grant the viewers license to respond.

Two photographs of dancers—taken by Barry Goyette—will actually be re-created by the dancers, one of veteran company member Jackie Lee in a box, and another of the fairy queen Titania with two attendants (from A Midsummer Night’s Dream). The photograph from Shakespeare’s comedy will inspire a performance piece most like a traditional dance show, though the audience is still worlds away from an orthodox auditorium.

Besides the continuous cycle of performances from 10 a.m. to 5 p.m. on Oct. 18 and 19, the ballet company is expanding the Open Studios timeframe to include Friday evening, Oct. 15. They will be hosting a fundraiser at Salisbury Vineyard at 7 p.m., featuring the living arts performances in addition to a wine tasting and silent auction.

While Civic Ballet may have invaded a space not often frequented by dancers, the concepts that the company embraces—particularly that of cultivating more personal relationships between the artist and viewer—fall perfectly in line with the Open Studios Tour. 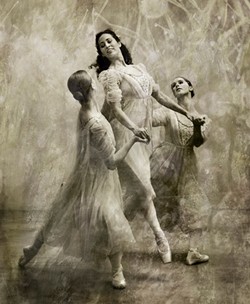 “The idea is to be in it, not just watching,” concluded Silvaggio. “It’s an experience.”

INFOBOX: A decade of open doors

The 10th Annual Open Studios Art Tour will take place in the North County on Oct. 11 and Oct. 12 and in the South County Oct. 18 to 19. For the first time, this year there will also be an encore weekend Oct. 25 to 26. Catalogues cost $25. Visit artsobispo.org for a list of vendors selling catalogues or call 544-9251 to purchase a catalogue. To purchase tickets to Civic Ballet’s Living Arts Gallery fundraiser, Oct. 17 at 7 p.m. at Salisbury Vineyard, call 544-4363. Tickets cost $20. Proceeds support a special evening of The Nutcracker for oncology patients and their families.