Dance to help a teen recover

Ivy Alvarado is recovering from a cardiac arrest: Unfinished Business, her favorite band, will raise the roof in a benefit. 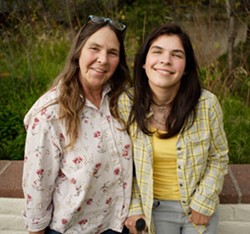 Last summer, Ivy was a healthy teenager who loved ‘60s music and helping the environment, when she suddenly collapsed from a cardiac arrest while working at a Subway Sandwich shop in SLO. Her heart and breathing completely stopped. When Melinda got the call about her daughter’s collapse from an Arroyo Grande police officer, she was in complete denial. “I thought it was a prank call. He told me three times before I believed him,” Melinda remembered. Ivy was transported to French Hospital in a coma.

The prognosis was grim. Images from an MRI scan showed damage to the white matter in Ivy’s brain, and the Alvarado family was told to consider “going on” with their lives: The chance of recovery was slim. The MRI as well as CAT images revealed Ivy was in a very deep sleep; the family was told she would likely never wake and if miraculously she did, she wouldn’t speak or walk again. “We went to four different places, all telling us to move on with our lives, but when we went Children’s Hospital in Los Angeles, they realized how important it is to have a family member around all the time. We were so thankful.”

Ivy’s improvement within the last half year is astounding. She’s speaking and learning to stand. But the Alvarado family is struggling to pay massive medical bills.

To the rescue of their greatest fan come the members of the rocking ‘60s tribute band Unfinished Business, who’ll flat out raise the roof at a fundraiser on Saturday, Jan. 30 from 6 to 11 p.m. at the South County Regional Center in Arroyo Grande. Tickets for a great dinner, nonstop dancing, and a silent auction are $50, or $25 for guests under 21 years old.

“The first time the nurse told Ivy what happened—she laughed,“ Melinda said. “The next time she woke up it was really emotional.” Ivy still doesn’t remember the incident, nor does she know what went wrong. “It was scary,” Ivy admitted, “I was in the hospital and was like, ‘what the hell am I doing here?’” She’s up to the challenge though, which has enlightened the teen. “My life has changed, like, let me tell you. My outlook has changed. Those ‘special’ kids you see at school—some people call them abnormal—they’re courageous.”

Ed Miller, the lead guitarist of Unfinished Business, had the idea for the benefit. Ivy had first seen the band three years ago during Farmers' Market at Avila Beach. “They played old rock ‘n’ roll, and I knew it all,” Ivy said. “She danced in front of them the whole time,” Melinda added.

The band members left flowers at the hospital and sent CDs and T-shirts to her. “They’ve seen Ivy go from not being able to stand up at all, into leg braces, until she was able to stand up with someone holding her for a few songs,” says Melinda.

Ivy promises to bring lots of cookies to the event. Melinda asked, “You’re going to leave some for the guests, right?” Ivy rolled her eyes with a smile, “I guess so, if I have to.”

French Hospital Medical Center offers monthly CPR and first-aid classes. Class size is limited to 25 participants and registration, including a $15 materials fee, is required. The next classes are scheduled for Feb. 1 from 5:00 p.m. to 9p.m. in the FHMC’s auditorium and February 1 and March 1 from 5 to 9 p.m. For information and to register call 542-6268 …

Jude Sanner Long became assistant librarian of the Morro Bay Library in 1975, when it was housed in a small storefront. she was named head librarian in 1980 and now after 35 years of service, her retirement will be celebrated from 2 to 4 p.m. on Sunday, Jan. 24, in the present library, 624 Harbor St., with a special program that includes the dedication of a Peace Pole in her honor, music, and hors d’oeuvres. The public is invited.