Dance your face off! 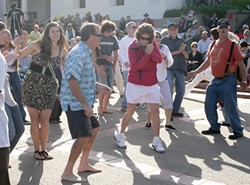 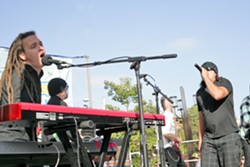 It’s especially fun if you like watching people dance their faces off, which I do! Like this one woman in front of me here, all dressed in white, leaping around the area in front of the stage just as soon as Nada Rasta launches into its set. Man, she’s twirling around, throwing her arms in the air, doing that “come out here” thing with her arms and fingers to coax all the people sitting around watching her onto the dance floor with her.

She’s so wild and earnest and into it that she’s clearly freaking some people out, which is also awesome! Eventually, however, more and more people join her out front, and thanks to her wild abandon, soon others are joining the crazy dance. 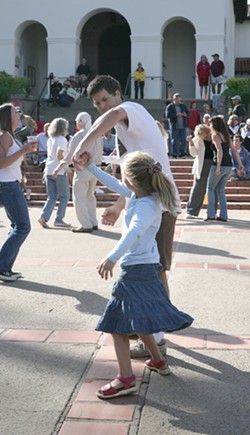 A father and his young daughter jump into the fray, and he picks her up like she’s a rag doll and whips her around him like those ’40s swing dancers. She’s shrieking with delight, the lady in white is prancing around, Nada Rasta’s bass player is thumping away as his Mohawk points straight up at the blue sky and cotton candy clouds.

It’s 72 degrees, the Firestone beer and J. Lohr wines are flowing, people are dancing, Nada Rasta has the crowd pumped up … it’s summer in SLO Town.