Have a one-night stand with MOMIX

For anyone still pondering why the chicken crossed the road, I’ve got a new livestock-based quandary: Why did the choreographer name his dance company after a milk supplement for veal calves? And how does he make dancers’ arms look like a flock of geese? Or incorporate pole-vaulting into a dance production? Moses Pendleton, founder and Artistic Director of MOMIX has all the answers. But it might be more enlightening to watch his company perform The Best of MOMIX at the PAC on Jan. 13.

Compiling three decades worth of work—MOMIX celebrates its 30th anniversary in 2010—into one show is a singular challenge that highlights just how prolific Pendleton has been as a choreographer. Among his past shows are a tribute to the desert landscape and wildlife inspired by the Saguaro Cactus (“Opus Cactus”), an exploration of dance liberated from earthly bonds (“Momix in Orbit”), a multimedia piece dedicated to America’s national pastime (“The Story of Baseball”), and—in the case of his most recent work—a documentation of nature’s metamorphosis as seasons change and life forms grow and die. Each piece has its own identity and story, and staging a cohesive show with segments from each is no small feat.

Then there’s the challenge of explaining what, precisely, MOMIX is and does. Pendleton has an athletic background; he originally turned to dance during college as a form of therapy to recover from an injury he sustained while skiing. His dream at that time was to be a downhill skier. Instead, unexpectedly, dance replaced skiing. But Pendleton’s choreography reflects his athletic background, forming an unusual aesthetic. In fact, one of his trademarks is a pas de deaux danced between two performers wearing skies.

In 1971 Pendleton—along with three other students at Dartmouth—founded Pilobolus, a dance company that was to become famous for its humor and invention. Then, in 1980, Pendleton left Pilobolus to found MOMIX. The collaboration had run somewhat dry, for him at least.

“This is MOMIX,” said Pendleton, who defies simple explanations and descriptions of his dancers on the basis that he doesn’t have any. “It’s definitely based on the body and dance in a more general sense. [The dancers] all put in their time at the barre, but they’re able to run on all fours like antelope at the same time. We’re mixing elements of dance, acrobatics, gymnastics, and dance. But it’s not any one thing.” 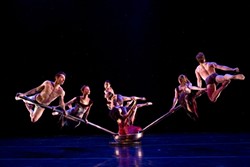 Pendleton’s ideas come from anywhere. The choreographer arms himself with an mp3 player and video camera; should an idea attack at an unexpected time, Pendleton is prepared. Much of this inspiration comes from nature.

It starts with an image—a flock of geese in flight or underwater undulations. After Pendleton has settled on an image, he must then construct it, using props, using costumes, using music, using choreography, using innumerable tools that most choreographers never think to bring to the stage. Pendleton cites “Medusas,” an excerpt from the piece Lunar Sea as an example of his process. He started with the picture of figures dancing underwater, and then it was his task to determine—by experiment and collaboration—how to do justice to the idea. He calls props “an extension of the body” and for him, this might include umbrellas, black lights, poles, rope, and silhouettes.

Despite the fact that the company is world-renowned and based in western Connecticut, MOMIX might just be better known in Italy, where the company has created a handful of Radiotelevisione Italiana features, which were in turn broadcast to 55 countries. While one troupe of MOMIX performers transforms the PAC in SLO, another group is completing a winter run of “Botanica” at Teatros del Canal in Madrid. And in earlier December The Best of MOMIX spent weeks at the Pallas Theatre in Athens. Pendleton cites the college tour circuit in the United States as prohibitive to performance groups that like to settle in a single theater and entice potential audiences through word of mouth. In the United States, the best MOMIX can usually hope for is a one-night stand at a university, despite the fact that a MOMIX show entails extensive set-up.

So, because this is a one-night stand, you won’t hear about it from your friends. You won’t read an after-the-fact review at your table over a breakfast of bacon and eggs (it’s the most important meal of the day, of course) and say to your spouse or live-in partner, “Honey, this show sounds deliciously weird. We simply must buy tickets for this weekend.” This is a wham-bam-thank-you-ma’am sort of affair, one glorious night only. And your only regret would be missing out on the magic.